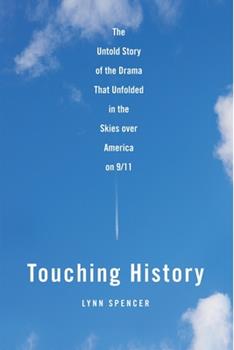 Touching History: The Untold Story of the Drama That Unfolded in the Skies Over America on 9/11

Now in paperback, the riveting story of the response of the heroic pilots and air traffic controllers who found themselves on the front lines of an undeclared war on September 11, 2001. In this gripping minute-to-minute narrative, based on an astonishing feat of reporting, Lynn Spencer re-creates the never-before told story of the unprecedented battle in the skies on 9/11, making vital corrections to the findings of the 9/11 Commission and revealing...

Compelling, detailed story of a day of chaos

Published by Thriftbooks.com User , 14 years ago
Lynn Spencer's "Touching History: The Untold Story of the Drama That Unfolded in the Skies Over America on 9/11" is an engrossing, compelling book about a tremendously complex event. Based upon numerous first-hand accounts and interviews, "Touching History" covers in great detail the entire breadth of 9/11 in the air: the air traffic control system, the airports, the airplanes in the sky, the air defense jets scrambled to respond to an unprecendented event. Spencer herself is a commercial pilot and flight instructor, so she brings a particular sensitivity and understanding to a complex subject, and she tells the story superbly well. Along the way she addresses a number of misconceptions about what happened, and did not happen, that day. The depth of detail is extraordinary, rendering an unusually vivid picture of events. "Touching History" is filled not with cold, hard facts, but with moments of great human drama. In the end, I was left with a strong feeling of admiration for those men and women -- pilots, air crew, air controllers, National Guard pilots -- who acted so swiftly to bring manageable order out of extreme chaos

Published by Thriftbooks.com User , 14 years ago
This is one of those rare books that are non-fiction, but pull you in like a great novel- just like you were there! The author, Lynn Spencer has done a superlative job of putting together the facts in a way that even though we know the eventual outcome we still want to read all the way to the end. When I first began reading, I thought the story would center on the four hijacked flights- but those stories have already been largely told. Rather, she tells the "big picture" of how those four incidents touched off an incredible series of events that affected tens of thousands of people that day and how individuals in extremely tense and difficult circumstances made the decisions that kept a very bad situation from becoming catastrophic. It can be seen in retrospect that our air traffic control system had many faults in dealing with this crisis, but it was the individuals involved that rose above the technical difficulties and "standard operating procedures" to make our skies safe that awful day. This is their story and we all owe a debt of gratitude to them for what they accomplished- all of the air controllers, civilian and military, leadership on the ground and of course all of the many, many pilots and aircrew who had to deal with something completely extraordinary. This book brought it all back and made me feel many of the same emotions I felt on 9/11. Personally, I feel we all need to remember what took place that day so that it will NEVER happen again.

Published by Thriftbooks.com User , 14 years ago
For many of us in the military that struggled that day to help put an end to the aviation madness that took place, had stories and wanted them told. We didn't want recognition or reward, we simply wanted the American public to know what happened behind the closed gates of our bases, how hard we all tried to stop what was going on, and above all else, to not let it happen again. Lynn Spencer had a vision that our stories had value and must be shared. No one else out there was listening to us, asking the difficult questions about how we felt, or gathered the true facts the 9/11 Commission missed or ignored. She knew she had one shot to get this right...and she sure did. There is no other book like this and dare say, never will be. Every American should read this!

Published by Thriftbooks.com User , 14 years ago
Mere words cannot begin to describe the gripping reality that Ms. Spencer captured in this book. From the cockpits of jet fighters, to the flight deck of the airliners, to those who tried to make sense of it all from behind radar screens, Ms. Spencer captured the anxiety, frustration, complexity, and at times, feeling of helplessness of all those who tried desperately to protect this country. This isn't a book so much about the what happened nearly as much as it is about those whose blood, sweat and tears went into their attempts to stop it and then come to grips with it. Having spent over 3 years of her life dedicated to this project, Ms. Spencer went to the people and listened to their stories, heard the quiver in their voices and saw the pain in their eyes as they spoke. This book takes you there. It puts you on the "inside" to see first hand what was happening and allows you to witness the many obstacles that had to somehow be overcome to fight against a never before seen enemy using a never before heard of tactic against American civilians, on American soil. I can tell you that Ms. Spencer got it right and tells it in a manner anyone can understand and appreciate. She captured the heart and soul of everyone involved.

Published by Thriftbooks.com User , 14 years ago
Touching History is the fast-paced and riveting story of what was happening in the skies on 9/11--a story that up to now has never been told. Lynn Spencer takes us into into the military and FAA control centers and into the cockpits of commercial airliners and military jets that day as everyone struggles to first understand what is happening and then what to do about it. The story is not as much about technology or military jargon as much as the human element. It weaves tales of heroism and bravery while also doing a great job of capturing the confusion in the skies that fateful day. Be forewarned--this book is hard to put down once started!
Trustpilot
Copyright © 2022 Thriftbooks.com Terms of Use | Privacy Policy | Do Not Sell or Share My Personal Information | Accessibility Statement
ThriftBooks® and the ThriftBooks® logo are registered trademarks of Thrift Books Global, LLC