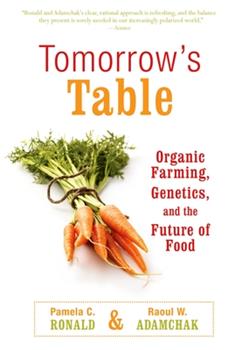 Tomorrow's Table: Organic Farming, Genetics, and the Future of Food

By the year 2050, Earth's population will double. If we continue with current farming practices, vast amounts of wilderness will be lost, millions of birds and billions of insects will die, and the public will lose billions of dollars as a consequence of environmental degradation. Clearly, there must be a better way to meet the need for increased food production. Written as part memoir, part instruction, and part contemplation, Tomorrow's Table argues...

Help Solve the Growing Problems of Population and Hunger

Published by Thriftbooks.com User , 13 years ago
Authors Ronald and Adamchak are an odd couple: Ronald a Professor of Plant Pathology and a supporter of bioengineering; Adamchak is an organic farmer, and has served on the board, as President and an in-the-field inspector of the California Certified Organic Farmers organization. Together, this husband and wife team may provide one of the most balanced views of how genetic engineering can not only co-exist with organic farming, but make organic farming healthier, safer, and more efficient. By combining the best techniques of both, Ronald and Adamchak argue that transgenic crops will be able to help solve the growing problems of population and hunger. The first part of Tomorrow's Table is an excellent introduction to organic farming and biotech, not too technical for non-scientists, but deep enough for those who want to know more about the science involved. The second half digs into the arguments used by the organic community against genetically engineered crops, how they can be, or have been, answered, and make a compelling argument that biotech can benefit the world in a responsible and healthy way.

Who would have guessed?

Published by Thriftbooks.com User , 13 years ago
A partnership between organic farming and genetic engineering might sound impossible, but might be the best chance we have to feed our growing population while taking care of the planet. Tomorrow's Table is not a technical text. It is a friendly discussion with a friend who invites you over for lunch. In their conversational tone, the authors make a strong case for integrating genetic engineering into organic farming, leaving behind many aspects of so-called conventional farming. Their points are backed up by much research, and references are provided the reader so he or she can learn more if they like. I hope this book will help some people to take a second look at genetic engineering, but it made me take a second look at organic farming. I had become convinced that organic farming was pointless and only for rich hippies. The discussion of the benefits of organic methods was more than enough to jolt me back to reality. In the interests of full disclosure, I'm a PhD student in genetics, and was generally in favor of genetic engineering before reading this book.

Tomorrow's Table is an important book

Published by Thriftbooks.com User , 13 years ago
I enjoyed reading the book and come away the better for it. This is an important work that cuts through a lot of...let's just call it dross...and makes plain to those of us without degrees in plant science what is important to consider in any handling of questions about and objections to the tools of modern plant science. The authors elegantly and masterfully frame the concerns and questions in the intricate tapestry of all pertinent aspects of agriculture. I look forward to hearing of its effective influence in agriculture in the coming years.

Published by Thriftbooks.com User , 13 years ago
As a consumer who shops at grocery stores that specialize in organic food, I have noticed a proliferation of signs and labels stating that this or that product is GE or GMO free. These labels don't do much to inform the public and do much to increase anxiety. This book is a great antidote; informative and detailed, clear and engaging. Readers of recent books on the politics of food, such as Animal, Vegetable, Miracle by Barbara Kingsolver or The Omnivore's Dilemma by Michael Pollan will be interested in the authors' global perspective and local expertise, and I was especially glad to read about the potential impact of GE food in developing countries.

Published by Thriftbooks.com User , 13 years ago
Pam and Raul's very well written book makes the rational and even emotional argument that biotechnology is fully compatible with the core ideals of the organic movement. I completely agree with that position looking back to my grandfather's version of "organic" from the 1960s. I wish I could believe that Pam and Raul's logical arguments will fly with the core of the "organic consumer" movement. They make excellent rational arguments. I'm not sure this debate is about that. As Mark Twain said, "you can't reason someone out of a position they weren't reasoned into in the first place." As much as I wish otherwise, I'm not optimistic that this book will succeed in its aim to reconcile "organic" and "biotech". Even so, it does a great job of explaining the societal benefits of biotech crops and it helps to humanize the people that have made this a reality. This is a book that everyone focused on the environment should read. Steven Savage, Ph.D. savage.sd@gmail.com
Trustpilot
Copyright © 2022 Thriftbooks.com Terms of Use | Privacy Policy | Do Not Sell My Personal Information | Accessibility Statement
ThriftBooks® and the ThriftBooks® logo are registered trademarks of Thrift Books Global, LLC