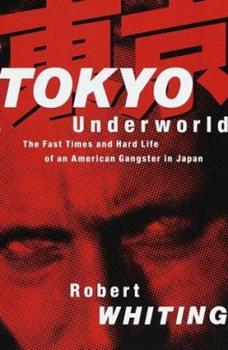 Tokyo Underworld: The Fast Times and Hard Life of an American Gangster in Japan

In the ashes of postwar Japan lay a gold mine for certain opportunistic, expatriate Americans. Addicted to the volatile energy of Tokyo's freewheeling underworld, they formed ever-shifting but ever-profitable alliances with warring Japanese and Korean gangsters. At the center of this world was Nick Zappetti, an ex-marine from New York City who arrived in Tokyo in 1945, and whose restaurant soon became the rage throughout the city and the chief watering...

A hilarious look at a very serious subject.

Published by Thriftbooks.com User , 21 years ago
5 stars to Japan-journalist Robert Whiting (of "You Gotta Have Wa" fame). The title of the book says it all - a documented account of the life and times of an American gangster, Nick Zappetti, in Roppongi, Tokyo from the Occupation in 1945 to Zappetti's death in 1992. This is not fiction, nor is it a straight history book. It is more like a biography, but focusses almost exclusively on Zappetti's life in Japan, with asides on the political and criminal background, including the Lockheed scandal. This is serious journalism, written with panache and wit. Whiting has done an excellent and difficult job, which only someone fluent in Japanese could do (the footnotes and references are just as fascinating as the main story). And what a story! Despite the violence and scams, and Zappetti's final embittered years, Whiting had me laughing out loud in several places. An ageing, impotent Zappetti, embroiled in endless lawsuits, is losing money on his flagship restaurant while the ones he was forced to hand over to his wife are making money hand over fist. His shrewd wife offers her free advice - "change the decor, adapt to Japanese tastes, turn up the lighting" - which Zappetti consistently ignores. Finally, at his wits' end, he does as she suggests and invests his last millions in a complete overhaul. The new shiny restaurant opens - just as Japan's bubble economy bursts! This book will appeal particularly to people who live or have lived in Japan, but also to anyone who enjoys a lurid and seedy tale!

Published by Thriftbooks.com User , 21 years ago
As you are reading this book, you will get the feeling that it can't be real, that it's all a fantastic work of fiction. However author Robert Whiting has provided an extensive list of notes and references in the back of the book to support his work. And the information that his book contains is frightening, and perhaps to those who are new to Japan, surprising. Corruption in Japan runs deep, and this book dives all the way to the bottom. Whiting has done a remarkable amount of research and has had amazing access to those people who really run Tokyo and by extension Japan, namely organized crime. Using a relocated New York Mafioso as his catalyst, Whiting exposes how deeply ingrained the Yakuza are, with influence extending as high as the Prime Minister's office and as far afield as the US and Indonesia. Nicola Zapetti knew and worked with some of Japan's most powerful Yakuza, and in Japan, many argue that the Yakuza are the most powerful group of all. Yoshio Kodama, a pardoned Class-A war criminal, ultra-right wing politician and well-known Yakuza once referred to himself as "the worlds richest fascist." LDP kingmaker Shin Kanemaru was found with millions of dollars in cash, bearer bonds and gold boullion in his house, much of it bribes from the Yakuza. New Prime Minister Koizumi has been labelled a "reformer" by the media in the West. Those who have read Whiting's book know enough to doubt both his sincerity and his chances of legitimate success at changing this system which is corrupt at its very core. If you want to understand the Japan that they don't teach you about in Polical Science and Business classes, you need this book.

An engaging expose of U.S.-Japanese corruption.

Published by Thriftbooks.com User , 23 years ago
Nick Zappetti sounds like a proper name for a Mafia boss. What is unusual about this particular capo is his territory-the Roppongi district of Tokyo-as well as the time of his ascendancy-the fall of 1945, in occupied Japan. Tokyo Underworld is a half-century survey of the dark side of the Japanese economic miracle, the criminal empire born of the corruption which riddled the Marshall Plan. Part postwar history and part gangster movie, Tokyo Underworld is unfurled by its author with a melodramatic flourish: It is an alternate, separate layer of reality, a shadowy universe of characters-gangsters, corrupt entrepreneurs, courtesans, seedy sports promoters, streetwise opportunists, intelligence agents, political fixers, and financial manipulators-who have perhaps done as much in their own right to influence U.S.-Japan affairs as their more refined and respected peers. Significantly, it has not always been easy to distinguish the latter from the former. Drawing on police and press reports as well as personal interviews (Zappetti himself was interviewed extensively for this book between 1989 and his death in 1992 at age seventy-one), Robert Whiting, one of the few western journalists to live and write regularly in Japan, depicts an awesome cancer of corruption metastasizing behind the rigid veneer of Japanese society. From the smoldering ashes of postwar Japan (where things were so bad the Japanese had to fight for scraps with the Korean slaves they'd imported during the war), to the CIA's backing of yakuza gangs in the `50s and `60s as anti-Communist thugs, to the ruinous scandals of the `90s, where prominent Japanese executives and politicians were implicated in vast criminal rackets as the economy plunged into a tailspin, crooked and straight men mingled freely across previously impermeable caste lines in an ever-expanding criminal sphere which Whiting calls "Japan's first experiment in democracy". And where was Nicola Zappetti during these halcyon days? Hailing from Prohibition-era East Harlem, Zappetti had chosen crime as a career during adolescence, skipping school to learn instead from thugs and racketeers like his cousin Gaetano "Three Finger Brown" Luchese. Whiting contends that Zappetti actually joined the Marines to give his budding criminal instincts room to expand, and delighted in the hell of postwar Tokyo, where he quickly made a stake running contraband whiskey, cigarettes, and military scrip to-who else?-Allied soldiers and small-time Japanese gangsters, the only people in Japan with money or goods to trade. Zappetti shrewdly played the gangs off one another, recognizing their tribal hatreds and the burgeoning Japanese market for narcotics. He did so on his own initiative, using his own brains and brawn, not relying on the American Mafia (except to get back to Japan after being deported by the authorities in 1950). Zappetti also made a smart long-term investment early on, introducing the Japanese

THE CHRYSANTHEMUM AND THE YAKUZA

Published by Thriftbooks.com User , 23 years ago
A wonderfully gripping book. As a gaijin who grew up in post-Occupation Japan and witnessed the scene which the author describes so vividly--and having had an encounter (thankfully, a positive one!) with Nick Zapetti, the King of Roppongi--I'd say Robert Whiting has captured the time and place and wooly cast of characters perfectly. A huge plus is the excellent commentary and cogent explanation of the backstage politics and the righteous criminal mentality of Japan, Inc. I give this book five stars and a haramaki.
Trustpilot
Copyright © 2022 Thriftbooks.com Terms of Use | Privacy Policy | Do Not Sell My Personal Information | Cookie Preferences | Accessibility Statement
ThriftBooks® and the ThriftBooks® logo are registered trademarks of Thrift Books Global, LLC