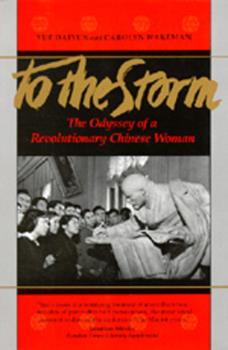 To the Storm: The Odyssey of a Revolutionary Chinese Woman

To the Storm by Yue Daiyun and Carolyn Wakeman is the fascinating story of Yue Daiyun, a faculty member at Beijing University. Yue Daiyun was a revolutionary from her early school days. She had been a child during the anti-Japanese war and hated the Guomundang. Accepted as a student at Beida in 1948, she joined the Communist Party's underground Democratic youth League and became a Party member the following year and helped with the Liberation of Beijing...

An honest middle-class revolutionary's diary of self-deception and survival

Published by Thriftbooks.com User , 15 years ago
At first, Yue Daiyun and her husband were both relatively successful academics, professors at Beida University in Beijing. Yue's father-in-law was a well-respected and wealthy authority on Buddhism, an honored acquaintance of Mao Zedong himself, who had read his books. They were third-generation academics, more middle-class than Communist, yet devoted Party activists. Because of Yue's history and worldview, her autobiography definitely feels intellectual and academic. There is a very helpful Chronology section, a timeline so that the events of Yue's life can be seen in the context of Chinese history. Her account attempts to make sense out of both the events of her life and of the revolution. She was very aware of current events and what the future might have brought. She kept up with the news and public opinion. Yue's story combines the account of a guardedly emotional and psychological personal life with a very historical feel, as if she was recounting everything important that had happened. It is a shocked and forced coping with the kind of revolution she never could have predicted, that eventually made enemies even of devoted vanguard revolutionaries such as herself. Yue saw Jiang Qing (Mao's wife) as somewhat petty, since Jiang "furiously" publicly attacked a member of her own family with only spurious justification: "Hearing her talk on and on about such family members, I wondered how I could ever admire Jiang Qing as a revolutionary leader when she seemed so concerned with personal vendettas (p. 164)." Like many traditional Chinese, Yue considered family very important, and didn't partake in such vendettas even when her sister-in-law provided ample opportunity to. This is not a coming-of-age story. Yue came of age before Mao's revolution and the Cultural Revolution that followed, so she was initially surprised by the depths of disloyalty her comrades sank to in order to protect themselves. She did not consider such supposedly revolutionary backstabbing as socially expected like later generations would. Yet Yue kept a strangely unshakable faith in the allegedly revolutionary process of ruining individuals for the sake of the revolution, even when it was her who was denounced and punished. She never even questioned such rampant political scapegoating at all until long after she became a victim herself. Yue saw the effects of chaotic revolution gone violently wild, where even those who risked their lives working against the Guomindang were later condemned as enemies of the people. China was mostly a country of peasants. Mao was born and raised a peasant. So the purging and oppressive manipulation of the small and elite academic class was an ongoing struggle throughout her life. At one point she is condemned for Rightist tendencies. Later her husband, politically almost identical to Yue, is condemned for being too Leftist. Go figure. They survive decades of anti-academic purges and will-breaking programs designed to make them into impover

Published by Thriftbooks.com User , 16 years ago
The book was first published in 1985 and I had owned a used copy for at least 15 years but never read beyond a few pages. About a week ago I went to check who the author was on the internet and then dusted the book out and read through to the end. In the book is one of the most trustworthy account of what the political and social life was like in the Mao era, from the founding of the PRC to the post-Mao "Democracy Wall" Movement. The author, a teacher and now a Professor at Peking University had lived through all the political campaigns of the era. She didn't just write catering to the interests of Western readers, like quite a few did. Yet the honest account proves more convincing therefore more damning to the ludicrous and absurd combination of radicalist experiments and power struggles. A famous passage from the Chinese writer Wang Meng quoted at the beginning of the book sets the tone for the whole book: I have walked through these twenty-one years one step at a time, and I am convinced that not a single step was taken in vain. My only wish is that we firmly remember this lesson paid for in blood, tear, hardship, and unimaginable suffering so that the actual situation can recover its true features and be recorded in the annals of history. If you are interested in the era, the book is valuable. There probably isn't a Chinese translation of the book and I can guess why. I salute to this strong and courageous woman, now around 75 years old.

A true and compelling story for all interested in China

Published by Thriftbooks.com User , 22 years ago
I just read this book and I cannot begin to describe the author, Yue Daiyuan's experiences and anguish during both the Anti-Rightist movement and Cultural Revolution in China. Her story is compelling and also reveals how indoctrinated and committed the young people during the early PRC period were to Communism and Mao Zedong. The book is one long record of the sad and horrendous events that were committed in the name of Revolution. If you're interested in modern Chinese history, this book is a must read since it provides so much first person account of what took place during the senseless period of the 1960's known as the Cultural Revolution.
Trustpilot
Copyright © 2022 Thriftbooks.com Terms of Use | Privacy Policy | Do Not Sell or Share My Personal Information | Accessibility Statement
ThriftBooks® and the ThriftBooks® logo are registered trademarks of Thrift Books Global, LLC