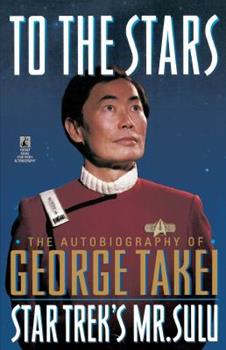 Best known as Mr. Sulu, helmsman of the Starship Enterprise TM and Captain of the Starship Excelsior, George Takei is beloved by millions as part of the command team that has taken audiences to new vistas of adventure in Star Trek ?--the unprecedented television and feature film phenomenon. From the program's birth in the changing world of the 1960s and death at the hands of the network, to its rebirth in the hearts and minds of loyal fans, the Star...

What an eye opener!

Published by Thriftbooks.com User , 21 years ago
I felt this book opened my eyes to what the american asians went through. I am too young to know about internment camps personally, but appalled to read about them. Very shameful at this day and age to think we could do that to other people. Enjoyed reading his life and all the many things he has gone through and the people he has known. Great Book!

Published by Thriftbooks.com User , 22 years ago
I very much enjoyed Mr.Takei's autiobiography, which is actually the story of an Asian man's experience in America, from the time of his internment at the Manzanar concentration camp as a young child, to his student days at UCLA, and his subsequent struggle against ethnic stereotyping at a time of very few opportunities for Asian actors. He shares very painful and personal memories with us of his career and family; his autiobiography continues through his Star Trek days of course, up to the present, with many intriguing revelations. What makes this book my favorite is that it is extremely well-written, in his voice, without the help of a ghost-writer. I hope this will not be the last I see of his writing. I don't know why one reviewer harped on George's comments on William Shatner, saying "he couldn't even finish the book" - strange comment, considering George's feelings on Shatner come in the middle, and constitute a few pages out of the entire book. This and Nichelle Nichol's are my two favorites from the cast, also written in her own voice, from the perspective of a minority actor in '50's America, and no less fascinating, in that she seems to have worked with or met almost every famous black performer at one time or another.

Published by Thriftbooks.com User , 22 years ago
I don't usually seek out Star Trek autobiographies, but I'm glad I found this one. I found it particularly useful in explaining the context of the title of the first Japenese-American novel, No-No Boy by John Okada. Takei's parents like the Okada character answered no and no to the loyalty oath that the U.S. government made its citizens like Okada's character and Takei's mother swear to. The Takeis, as a family, went to another camp, a camp for troublemakers. Okada's character, a single man, goes to jail. I have read other descriptions of camp life, but Takei's particularly useful and helpful. (In fact, I used it as part of a lesson plan on teaching No-No Boy to secondary students.) I also found Takei's political life interesting. So while I appreciate Mr. Sulu, I like Mr. Takei much more.

An excellent book from a very intriguing person

Published by Thriftbooks.com User , 23 years ago
I've read most of the books from the Star Trek ensemble. I, by far, enjoy most the books that are written by the biographer his/herself, such as George Takei has done. This is a true life story, and not just another solilquy of Star Trek life. His account of his early life is particularly fascinating (to quote Mr. Spock!). His unique insight, experiences, and literary talents make this book among the best autobiographies of any type. To illustrate just how good this book is, my wife, who is not particularly a Star Trek fan, grapped up this book and read it before I could! You most definitely DO NOT need to be a Star Trek fan to enjoy this work of art.

Charming! An upbeat story by a talented man.

Published by Thriftbooks.com User , 23 years ago
This book is worth reading whether or not you're a Sulu fan. I found the chapters on Takei's early years in the WWII Japanese interment camps even more interesting than the Star Trek years. Though the fact of interment, itself, is grim, Takei lets us view life in the camps through the eyes of a child. Innocence and curiosity shine through. His memories are surprisingly upbeat, in spite of the horrors of displacement and prejudice. He recalls childhood friends he met in the camps (two of whom are named Ford and Chevy Nakayama--how wonderfully symbolic of their Japanese and American ancestry!) There are rich descriptions of Takei's own Japanese-American heritage throughout the book, as well. I enjoyed "meeting" his family through this book: his mother, who was determined to keep family life warm and friendly despite their barbed-wire environment; his father, who gave such a meaningful description of American ideals, notwithstanding society's frequent failure to live up to its ideals. George Takei's life is an embodiment of the true human spirit. My only regret is that the book wasn't longer. What was in the unabridged edition, I wonder?
Trustpilot
Copyright © 2022 Thriftbooks.com Terms of Use | Privacy Policy | Do Not Sell My Personal Information | Accessibility Statement
ThriftBooks® and the ThriftBooks® logo are registered trademarks of Thrift Books Global, LLC