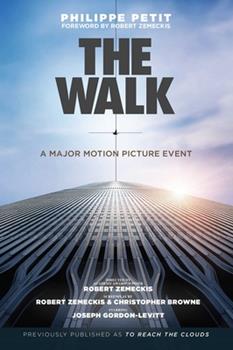 The Walk: Previously Published as to Reach the Clouds

Now a major motion picture directed by Robert Zemeckis and starring Joseph Gordon-Levitt, an artist of the air re-creates his six-year plot to pull off an act of incomparable beauty and imagination. More than a quarter century before September 11, 2001, the World Trade Center was immortalized by an act of unprecedented daring and beauty. In August 1974, a young Frenchman named Philippe Petit boldly--and illegally--fixed a rope between the tops of...

Published by Thriftbooks.com User , 17 years ago
I remember seeing the WTC towers being built, still partly framed in steel, as a child in the late 1960's. I also remember a snippet of this event in the news in the 70s. But, it was (I think) Ken Burns' American Stories on TV that reminded me of it and really gave it perspective that blew my mind as to how unbelievable an event it was. To me, it wason a scale of things like landing on the moon. With that still fresh in my head, I looked into the event and found this book and was unable to put it down from the first page until I finished it. This book is inspiring. Petit is a bit crazy, but to pull off a hack of this magnitude, you have to be. Genius is touched with madness. To say the feat is inspiring is a great understatement. The logistics, planning, obstacles overcome, and just plain luck that all aligned in the end were really incomprehensible - more so after reading this book! I thoroughly enjoyed every page. Sometimes, I get overwhelmed with things I need to do and obstacles I face, and I look at that timeless picture of Petit between the towers on the cover of this book and I am inspired. If he could do THAT, certainly I can find a way to overcome whatever is in my way today. THis book is fantastic.

Ode to achieving dreams. The magic of balancing in the air.

Published by Thriftbooks.com User , 19 years ago
Firstly, i am so surprised that this book does not figure in the "Hype list" of any Media outlet. Luckily, i came across a short review of this book in a magazine and was intrigued to know that Sep11'2001 was not the first time that the towers of World trade centre captivated the attention of millions around. It was way back in 1974, when a French tightrope walker did the unprecedented daredevilry act of walking between the peak of two towers on a cable which he had rigged illegaly the previous night. He walked for 45 minutes from one tower to another, making the sky his theatre. Why did he do it?? Was it for fame? Money? Lunacy?? Philipe Petit's book explains the whole adventure in simple prose accompanied by sketches and photographs which were done during the unfolding of his "project". It is an amazing adventure. Reading it is like reliving it- Petit achieves that magic of retelling a story and giving his readers a feeling of experiencing it vicariously. When Petit was asked by a TV crew why he did it - his answer was, when i saw three oranged, i juggle. When i see two towers, i walk ! ;-) Petit was not alone in his effort to breakthrough the security of the towers and implement his plan. Aiding him where his friends who believed in his ability and went to great lenghts against all odds in planning and pulling off the feat. This is a great book, in the true spirit of adventure and the endless capacity of a human to set and achieve his goals. One more imporant thing to note, Petit doesn't sound arrogant or egoistical. At the peak moment of his success, he is modest and humble, bowing to the gods in every element which helped him in the feat - the wind, the sea, the people below, his dear friends, the friends who stood by and the friends who gave up- he sees gods in all of them and thanks them for their role. I am not given to effusive praise and there is nothing like a perfect ten. But, this is a fine read.

Published by Thriftbooks.com User , 19 years ago
This is a beautiful book that proves dreams do come true if you really want something bad enough and are willing to work hard enough no matter what the risk to reach that goal. It was Paris, 1968, when young 18-year-old street performer Philippe Petit saw a sketch of the proposed World Trade Center towers, and he was so awestruck that he drew a line between the two rooftops of the towers, and decided then and there that his ultimate goal was to one day walk on a high wire between the two towers. Over the next six years he perfected his craft. He did public performances atop Paris' Notre Dame in June, 1971, and he walked between the northern pylons of the world's largest steel arch bridge in Sydney harbor, as well as other high wire acts. One day in late summer 1974, Petit's dream came true. As thousands watched he made eights crossings between the towers, 110 stories above the ground, in less than an hour.I think the most fascinating aspect about this story, was the lengths that Petit and his co-conspirators went to plan, train, and carry out this unauthorized feat. It's all here in vivid detail. And even if you didn't bother to read the text in this book, the photographs are amazing and breathtaking by themselves. This is a captivating memoir that captures the excitement, triumph, and joy of Petit's stunning achievement. Now that the towers are, sadly, gone, it's all the more important as a part of the towers history. I more than enjoyed this memoir, I was fascinated by it. It is certainly a positive and enlightening ray of hope for those who dream of the impossible! Joe Hanssen

Published by Thriftbooks.com User , 19 years ago
Philippe Petit pulled off the ultimate caper: to connect two post-modern towers by a slender thread, which he then danced upon, smiling, to the surprise of the world. The ultimate tribute to the towers is this story, written by a guy whose cleverness and hard work led to a celebration of the height of our aspirations. This Frenchman, who refused all the profits of fame, still aspires to create moments to remember. Do you dream? Do you look at the dullness of the world and see infinite possibilities? Then you should read this funny, poetic, inspiring book. This is a how-to book for dreamers.

Published by Thriftbooks.com User , 19 years ago
Phillipe's book is phenomenal. What he did was absolutely stunning, both physically and artisticly. There is a beauty to his story that manages to intertwine the human form with our techonological and architectural triumphs. He reminds us that it was a mortal being that inspired the towers; that we are still capable of surpassing our greatest achievements.Those of you who criticize his character -- and I hardly think his character relevant to his art -- must have missed his performance on THE TONIGHT SHOW. He was by far the most charming and down-to-earth (forgive me) guest. Phillipe crossed broadway, despite the rain, and then sat with Letterman for an interview. His demeanor was sweet and he expressed his love for New York. By comparison, the hollywood princess next to him appeared ridiculous.I highly recommend this book.
Trustpilot
Copyright © 2022 Thriftbooks.com Terms of Use | Privacy Policy | Do Not Sell or Share My Personal Information | Accessibility Statement
ThriftBooks® and the ThriftBooks® logo are registered trademarks of Thrift Books Global, LLC