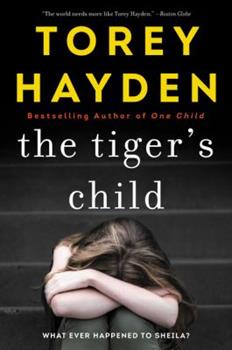 The Tiger's Child: What Ever Happened to Sheila?

(Book #2 in the Sheila Series)

From the bestselling author of One Child comes this incredible, true story of the six-year-old girl who touched the hearts of millions and the courage of one teacher who would not give up on her. What ever became of Sheila? When special education teacher Torey Hayden wrote her first book One Child thirty-five years ago, she created an international bestseller. Her intensely moving true story of Sheila, a silent, profoundly disturbed little six-year-old...

Published by Thriftbooks.com User , 18 years ago
Having read One Child over and over and over again starting at the age of ten, I was euphoric to come upon The Tiger's Child in a bookstore 15 years later. I had wondered about Sheila my whole life, worked for several years in a preschool in great part due to that astonishing tale. I believe all the magic that was in the first book, because that is the truth about the reality of children. The Tiger's Child was somehow more sad, even if in much subtler & less horrifying ways than the first book. Sheila had left her childhood, and Torey L. Hayden (who was just 24 in the first book!) was not in a position to help her to quite the extent that she had been able to in the earlier years. Torey L. Hayden writes very honestly and does not attempt to soften any of the difficulties in this later period. Her work as a teacher is remarkable & awe-inspiring... I just wish that somehow the world had continued to provide for Sheila as much as Torey had been able to in One Child. I ache that the extraordinary, brilliant light that was Sheila was not left with as purely a happpy ending as the first book leads us to believe is possible...but I strongly recommend reading both stories.

Published by Thriftbooks.com User , 18 years ago
When I first heard about TIGER'S CHILD, I knew that I had to read it to find out what had happened to Sheila. I was not disappointed. I found that Sheila had carried a great deal of anger around with her all these years toward Torey for "showing her the good life and then deserting her just like her mother had." This rather dumb-founded Torey, because she was just doing what all teachers do at the end of a school year--saying good-bye to her students and moving on. Torey had to work very hard in this book to build up a trust level again. Sheila was not going to make this easy. However, the ending was satisfying; and we are left knowing that Sheila will be all right. I don't know how Torey makes her writing such compelling reading. I could not put the book down--even when I needed to look at scenery on a vacation. I recommend this book to anyone who needs a heart-warming read.

Published by Thriftbooks.com User , 18 years ago
I read the prequel, ONE CHILD, over 20 years ago. I was ecstatic to find out that this sequel existed! Finally, I would find out what happened with six year old Sheila, the young girl that captured the hearts of millions! I certainly cannot say her life took any of the turns I had hoped for, imagined, or expected, but every turn was certainly exciting! I love the way this author is so honest about her own mistakes in life and her ability to work so well with so many special kids inspite of or even because of those mistakes and her willingness to admit them. Her words are so well-chosen and that made this book easy to read and follow, yet the story itself carried my emotions on a roller-coaster ride that was certainly worth the price of the ticket!Just as ONE CHILD left me wanting to know more, years ago, THE TIGER'S CHILD answered many old questions, yet still left me wanting to know more about how Sheila fairs throughout her lifetime!I highly recommend reading this book, either as the sequel to ONE CHILD or even as a stand-alone book!

I Bought This One In Hardcover...

Published by Thriftbooks.com User , 22 years ago
Normally, I do not buy hardcover books. I wait until they are released in paperback or become available at the library. But when I saw the sequel to one of my all time favorite books, "One Child", at the bookstore right after its' release, I snatched it up immediately and ran to the cash register! That night I read the whole book from start to finish without stopping. For years I had wondered what became of Sheila after Torey's last glimpse of her through the school bus window, and now that I had the answer in my hands I could not put it down. It was heartbreaking to learn that the happiness and love that Sheila discovered in Torey's classroom did not last after she left. However, the story of she survived despite her many hardships, even finding some of that happiness again when she and Torey were reunited, was fascinating and often tearjerking. I have read and loved all of Torey Hayden's books. This is one of the best. I would love to see Sheila write her own book from her point of view some day!

Published by Thriftbooks.com User , 22 years ago
I first read One Child when I was thirteen, and it was a powerful force in my life, impacting me more deeply than any other story I have ever read. I related somewhat at thirteen to her life at six, and have read the book millions of times since, always wondering what became of Sheila and what her life might be like now. So when I discovered this sequal yesterday, it was like a goldmine. My biggest emotional reaction was deep sorrow, because One Child WAS like a fairy tale that had led us to believe that Sheila would probably be all right now that Torey had given her the wings to fly. But reality tended to beat Sheila up one side and down the other like a spiked club, and she no longer had anyone to help her through it. I look at Sheila as having lived her life very much alone with the exception of the five months in Torey's classroom in Marysville. Is five months really enough to build a sturdy enough platform for this kid? All kids need constant care and attention; kids in healthy households living comparatively idyllic lives still clamor for more and more attention, love and care. Six is not really big enough to take on the world and conquer it and all its horrors alone, it is barely big enough to tie one's own shoes and remember where your mittens are! I can completely see Sheila's point when she accused Torey of offering her a world full of color and warmth and then sweeping it all away. Sheila was abused before Torey came, while Torey was there, and after she left. Torey's subsequent disappointment at finding this relatively human teenager, including dyed hair and common teenish speech patterns, is naive on her part. What did she expect? She hadn't been there; when Sheila was being abused and shifting around in foster homes, where was Torey, and what right did she have to judge Sheila now, at a still-tender thirteen? What right did she have to expect ANYTHING? Sure, it appears as if Torey is this wonderful goddess-type teacher that goes the 800 extra miles for Sheila, but Torey had never had to deal with Sheila's life on a day-to-day basis, could have no idea. The real hero is Sheila, who IS a survivor, who did remarkably well with herself considering she's sprung from horrors most of us can hardly imagine experiencing ourselves. She shouldn't have to feel grateful for what Torey's done for her; as a child, it was the least she could expect from somebody. It is Sheila who created herself, and what an extraordinary person.
Copyright © 2020 Thriftbooks.com Terms of Use | Privacy Policy | Do Not Sell My Personal Information | Accessibility Statement
ThriftBooks® and the ThriftBooks® logo are registered trademarks of Thrift Books Global, LLC