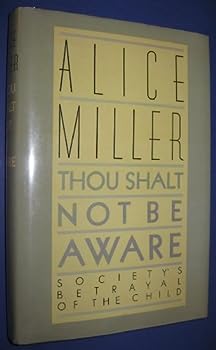 Thou Shalt Not Be Aware

Originally published in 1984, Thou Shalt Not Be Aware explodes Freud's notions of infantile sexuality and helps to bring to the world's attention the brutal reality of child abuse, changing forever... This description may be from another edition of this product.

Published by Thriftbooks.com User , 20 years ago
In Thou Shalt Not Be Aware, Alice Miller turns Freud's oedipal complex on its head by exposing the circumstances that led Freud to side against his patients, and thus, against the truth of the life experiences of children. It is a great work by a highly regarded psychiatrist and thinker, well researched, and readily useful in applying to one's own life. For myself, this book (along with The Drama of the Gifted Child) helped to liberate me from the lies of my family and confront the abusers of my childhood without fear, dread or resentment, for, as I gradually accepted the facts of their lives as well as my own, I could accept the havoc they wreaked on mine, and finally take unashamed responsibility for my own life.

Another masterwork from the Galileo of psychoanalysis

Published by Thriftbooks.com User , 20 years ago
Alice Miller makes her perspective so clear and so unavoidable in this book that it is all but impossible not to feel your stomach go up in knots as you try to think about everyone's life that it explains--from best friends to her analysis of author Franz Kafka--but your own.Without hanging Freud in effigy or throwing the baby of his genius out with the bathwater of his philosophical and ethical judgement errors, Miller established her perspective and cry for new psychological techniques based in compassionate listening to others lives and childhoods (instead of forcing others lives into a preexisting paradigm) magnificently. The effect of her work begins with her establishment of Freud's drive theory--Oedipal complex, et. al.--as merely an artistic, pseudo-scientific extension of the very Judeo-Christian, Victorian Age system of morality that allowed for secret atrocities to be routinely committed on innocent children in the first place. Its existential inadequacy in charting the anatomy of the soul (which is what the word "psyche" means) comes up in virtually every psychoanalysed person and derivative doctrine and explains much if not most of the profound failures of the entire discipline in Western society this past century (and, definitively, people's lack of faith in it). It's as if Freud, like Shakespeare or Bach, created a new language with many of the materials of the popular one being used; only unlike Shakespeare or Bach then chose, because of the martyrdom that sticking to his real discoveries demanded of him, to basically backpeddle and translate all of the same antequated ideas he should have replaced into it. Camille Paglia of SEXUAL PERSONAE was the first person I ever heard say that people who try to judge Freud on scientific terms miss the point that he wasn't trying to make science; he was making art. Alice Miller proves she was right, only the art he created hurt people as much as it helped, as his theories of the innate sexual drives of children are based on--but has little to no basis in--the hidden, unspoken reality of the lives of children: powerless against the love, power and abuse of sexually conflicted adults.Alice Miller redefines common sense with her perspective, by replacing your view of history and present day reality. To read her books is to begin to be free, know your inner grief, release it, and be reconnected with your vitality, creativity and joy. In charting Western society's betrayal of the human child, the grief one feels upon its discovery through her is unavoidable. But the secret life and hidden potential one discovers of the human child, through being once again reacquainted with the truth of their (our) infinite posiibilites for growth and transformation--if only left to do so--is astounding. True, if you have ever found yourself brought nearly to tears over stories of child abuse, seeing how prevalent it is and what its actual impact on the world is via reading this will be hard for you to take. But i

Please make this book part of all psych studies curriculm

Published by Thriftbooks.com User , 23 years ago
God bless her...this book finally pin pointed the frustration I felt with "shrinks" and other "institutions". So credible is Alice Miller AND yet why isn't this woman front page news. After an injurious experience with a devout Freudian I am sure his genious did more harm than good. What courage A. Miller had to stand up and fight. Keep on excavating..there is hope with people like her in this world!

A must for anyone raised by other than perfect parents!

Published by Thriftbooks.com User , 24 years ago
This is an incredibly liberating book. Ms. Miller is the strongest child advocate ever. She rejects the concept that children have power over adults (a la Lolita) and lets us see the true balance of power between children and their primary caretakers (which explains why over 3,000 children a year are murdered by their adult caretakers). All the guilt that parents lay on children for making them unhappy is revealed as the oppresion that it is. Finally, someone who doesn't insist that children (even adult ones) sacrifice themselves to the unresolved needs of their parents. Reading this book is a truly cathartic experience.

Published by Thriftbooks.com User , 24 years ago
Alice Miller has gotten through her pain and is being a true advocate by helping the rest of us through ours. The book, made me laugh, cry, gasp, and scream out loud. I read Drama of the Gifted Child first, and then this, and have read seven of her other books. I especially enjoy the personal references in all her books. This book was special to me because it uncovered the 'poisonous pedagomy' in my life, that had been there all the time. I did not even know it until I read this book. It told all about my life and how to get better. I wish I could have read this book years ago - I may not have to have been so miserable for so long! I am truly grateful to have found the works of Alice Miller. She is an inspiration and a mentor!!!
Trustpilot
Copyright © 2022 Thriftbooks.com Terms of Use | Privacy Policy | Do Not Sell My Personal Information | Cookie Preferences | Accessibility Statement
ThriftBooks® and the ThriftBooks® logo are registered trademarks of Thrift Books Global, LLC