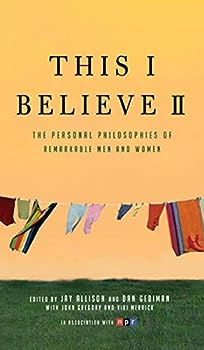 by Dan Gediman and Jay Allison

The new paperback in the bestselling series of inspiring personal philosophies This collection of This I Believe essays gathers seventy-five essayists--ranging from famous to previously... This description may be from another edition of this product.

Published by Thriftbooks.com User , 13 years ago
This is a terrific collection (5 CD's worth!) of short essays previously played on the NPR series, This I Believe is based on a series that was originally on Edward R. Murrow's radio program. It let individuals explain some of their personal beliefs and philosophies. It's a diverse collection of 75 essays from people you might know, students, workers, CEO's and waitresses to others who are famous, Robert Fulghum, Tony Hawk and Craig, who started Craig's list! Most of them are read by the author, which really helps to personalize each essay. Some will make you laugh, some will make you cry, but they will all give you something to think about. Wonderful and highly recommended!

Something Worthy To Fill the Cluttered, Nervous Room of the Mind

Published by Thriftbooks.com User , 13 years ago
In 1951 Edward R. Murrow wrote: "What truths can a human being afford to furnish the cluttered nervous room of his mind with, when he has no real idea how long a lease he has on the future?" Murrow's original series, "This I Believe," and this follow up series by Jay Allison and Dan Gediman seeks to answer this compelling question, with resounding success. I obtained this little set, with the hope of entertaining and diverting myself with a few feel-good moments during my long walks with my iPod. I walk eight miles a day, fifty-six miles a week, month in and month out, and listen to a lot of books. I sought entertainment and came away with something much more rare--edification and enlightenment! A few random thoughts on this collection: 1. This set contains personal essays from seventy-five writers, each of 500 words or less and answering the question, "what do I believe?" While the collection itself is compelling and very moving, it seeks a much deeper objective--to influence the listener to write his or her own essay. 2. I love the fact that each essay is in the writer's own voice, not the voice of some professional reader in a recording studio. There is something about the tone, timbre, accent and cadence of each writer which adds power and conviction to each essay. It is as if the voice itself can steal unawares into the heart, surprising the listener with insights and emotions which go beyond the mere words. 3. I also love the fact that these essays represent people of all walks of life--the famous and the unknown--the eloquent and the homespun.

What would you say?

Published by Thriftbooks.com User , 13 years ago
This is a collection of 75 personal essays narrated by the authors about their beliefs, values, and perceptions. Each essay ends with personal questions. The writers are not all famous, but all of them are provocative. The project is intended to be a 'snapshot of the values of our age.' Some of the writings will attract and some will annoy, but I think everything will inspire you. This is a fascinating listen and one you will want to hear more than once, because the messages will touch you at different times in your life. Very worthwhile disks. I'm glad to have discovered this product. Rebecca Kyle, October 2008

Reaffirms the power of the story, the spoken word...what's not to love?

Published by Thriftbooks.com User , 13 years ago
Once in a while an idea comes along that's so simple, so pure, as to demand: why hasn't anyone done this before? Accomplished freelance producer Jay Allison, of Falmouth, Massachusetts, struck upon reviving an mouldy-but-goldy: assemble articulate people to speak plainly, from the heart, about their deepest convictions. This is no mean feat speaking from an age of irony, where the best are cowed into silence by the masses of twitch-and-click "comments" that infect our public airwaves and media. To stand before the public in open and naked invocation of the tenets and values nearest and dearest to our hearts is to invite the slings and arrows of a public reared on blithe and thoughtless commentary. These speakers--celebrities and no-bodies, the ordinary and the extraordinary--toss caution to the wind and speak plainly, clearly. You won't find yourself in agreement with every speaker's values, but you will admire their candor and their willingness to stand in the harsh light. Who's here? The list goes on: Alice of Alice's Restaurant on the value of making it up as you go along; Frank Miller on the value of patriotism; Yasir Billoo on being raised an American; Sgt. Ernesto Haibi on belief in one another and mankind. These voices bear witness to the best we can be. The back of the CD slipcase says this collection belongs to the "Inspiration" section. This is the first time I've ever been un-apologetic about owning such an earnest, inspirational collection in my library. If you are a fan of the Story Corps project, you'll find a spiritual consonance here. Both projects seek to recover the art of the story and the spoken word. Would you like to believe? These are the voices of your family. These are the voices of your neighbors. It doesn't get much better than this. I recommend this highly.

Published by Thriftbooks.com User , 13 years ago
Well, anything with NPR on it is usually good as far as I'm concerned, but this is just an amazing collection. I remember a few months back listening to some of these on the radio and being so impressed. I heard mostly the pieces that had been written by noted individuals, but I was impressed with NPR for opening the doors to the average person to share. I think this kind of nationa/world wide group involvement in co-creating something is a product of our current technological age - such as the My Space and You Tube sort of things. But this collection of CDs is just so impressive. I was astounded to see that there are 5 CDs in the set, and there are many "just average folks" on here. I especially like the first piece on CD #3 about a young woman who is a waitress in a Texas diner. She selflessly helps out a customer and is later rewarded with the knowledge that her simple act may have radically changed someone's life. Her main idea is that you can create peace through one simple act of kindness. I am on the road almost every weekend, so these have become a staple part of my listening while driving, and when my spouse or friends come along, these CD play an important part of our conversation. I have also started playing one selection a day for my students to discuss in class, and I love the fact that the pieces are short and lend themselves to great conversation. Many, if not all, of the items have topics simple enough to even upper elementary children to listen to and understand, so these could be great family conversation starters. I just can't say enough good things about this positive and remarkable product, and I look forward to the next set.
Trustpilot
Copyright © 2022 Thriftbooks.com Terms of Use | Privacy Policy | Do Not Sell or Share My Personal Information | Accessibility Statement
ThriftBooks® and the ThriftBooks® logo are registered trademarks of Thrift Books Global, LLC