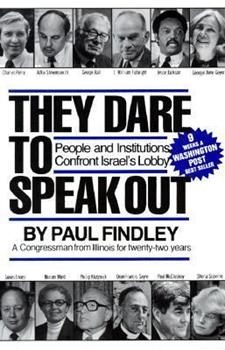 They Dare to Speak Out: People and Institutions Confront Israel's Lobby

The first book to speak out against the pervasive influence of the American-Israeli Public Affairs Committee (AIPAC) on American politics, policy, and institutions resonates today as never before.... This description may be from another edition of this product.

Published by Thriftbooks.com User , 15 years ago
I read this book many years ago when I was a student of Middle East Politics at UC Berkeley. I recently took it down to compare it with other recent works on the subject. I now appreciate that former Congressman Findley's book was truly a trail blazer in exposing the systematic attempt by Israeli supporters to stifle all dissent. What Findley documents are individual examples of blatant intimidation to publicly humiliate and demean anyone in this country that has the audacity to question the United States' blind policy in supporting Israel. This book should be read by every American who is concerned about the "closing of the American mind" on debate about Israel and US policies in the MIddle East. Given the perilous times that we now live in, it is vital that this country engage in a vigorous national debate. In addition to Findley's book, I would also recommend everyone read James Petras' "The Power of Israel in the United States" and President Jimmy Carter's recent book.

Finally someone with authority tells us "why"....

Published by Thriftbooks.com User , 18 years ago
Ever since I happened to notice George W. Bush repeating over and over again during his presidential campaign the mantra, "I know one thing -- Israel is our friend", my interest was piqued. At the time, I thought conservatives were largely at odds with Jews due to their reputations for being liberal Democrats. (Since then, I have discovered that conservative Christians often support Israel because of their biblical beliefs regarding Jews as God's chosen people). Later, I saw Hillary Clinton stammer and look visibly shaken during an otherwise very confident and fine performance on a Crossfire appearance, when Chris Matthews pressed her about the Palestinian right to statehood, and her only being able to blindly repeat the stock answer "well, I support Israel's right to defend itself." I thought...hmmm, this is interesting. It seems that nobody, regardless of political persuasion, wants to say anything even remotely being construed as being against Israeli policy.Since then I have read a lot on the issue and have been watching the news media and our government officials more closely. The most recent standout example was when Howard Dean was publicly criticized for the apparent crime of saying that US needed more balance in its policies with respect to the Israel/Palestine issue. Joseph Lieberman publicly castigated Dean for that statement, saying he was hurt and saddened Dean had been so insensitive to Jews. Does sensitivy to Jewish feelings mean that we must muzzle oursleves with respect to U.S. foreign policy? After all, it is our money, our security, and our lives that we're talking about. Findley's book shows that this is more true than we ever thought possible in a supposedly "free" society. He shows how powerful pro-Israel lobby wields such influence that governmental officials and the media cannot even public disagree when Israeli interests counter U.S. interests. If what Findley says is true, a one-time leader of the powerful AIPAC actually boasted that his organization actually controls U.S. foreign policiy in the Middle East. Apparently Congressmen and Senators routinely "clear" their positions and legislation with AIPAC before proceeding.Over and over again I have watched the U.S. government and our main media outlets whitewash, or more likely, completely fail to cover, Palestinian deaths at the hands of Israelis, while never failing to report and denounce Israeli deaths at the hands of Palestinians (despite the fact that far more Palestinians have died). Our unbelievable amount of monetary and military aid to Israel, more than 3 billion annually, is outside of the realm of public debate. Along the way I have talked to many Jews and non-Jews, in a sincere effort to come to some understanding about all this, to determine what is at the root of this seemingly inseperable and super-loyal bond between the U.S. and Israel. Up until I read Findley's book, nobody has ever been able to articulate the reasons behind the power tha

A stark revelation about who wields the true power in D.C.

Published by Thriftbooks.com User , 22 years ago
Paul Findley has written one incredible, eye-opening book that calls into question the high pressure, unethical, slander tactics used against academics, religious figures, journalists and political figures who speak out against the American Israel Public Affairs Committee's overzealous involvement and desirous control of economic and military diplomacy as well as education. This is a group that nobody wants to mess around with. The power hungry citizens and 'big wigs' in this lobby have a disturbing amount of clout that really makes you look at government differently. To stand up and speak out against Israel's lobby and their very questionable dealings in national and foreign affairs is essentially to put a career/social/economic death mark on your forehead. The shady dealings that this group instigates and leads, whether it be on a large or small scale, undermines the ethics and principles for which this country and the Jewish faith stand for. This book is an education in itself. Although disturbing, because it makes the Constitution seem like a useless piece of paper with 'silly' writing on it, Findley's book is very benefical if you want to know how a facet of foreign and national policy operates.

I found this book to be highly informative and objective.

Published by Thriftbooks.com User , 22 years ago
I feel that this book is a must read for all Americans interested in U.S. - Middle East relations and the challenges to formulating a more balanced and just policies. Paul Findley, an Illinois Congressman for 22 years, examines the role of pro-Israel special interest groups in heavily influencing public officials and policy makers into making biased and counterproductive decisions impacting our relationship with the countries of an important region of the world. Findley has carefully researched and examined the extent of pro-Israel lobbying in this nation. While he defends the rights of American citizens to support causes they feel a moral obligation to, he argues eloquently that the interests of another country should never be placed above the interests of the United States.I highly recommend this book to anyone interested in understanding the importance of having balanced foreign policies, particularly at a time when the United States is trying to serve as an honest broker to resolving conflicts in the Middle East and elsewhere. It was educational and a real eye opener to me, a seeker of truth and objectivity.
Trustpilot
Copyright © 2022 Thriftbooks.com Terms of Use | Privacy Policy | Do Not Sell My Personal Information | Accessibility Statement
ThriftBooks® and the ThriftBooks® logo are registered trademarks of Thrift Books Global, LLC