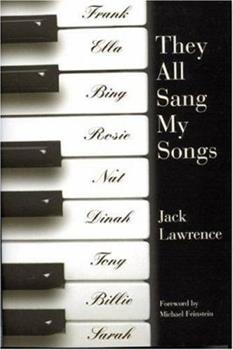 They All Sang My Songs

Jack Lawrence wrote songs that launched the careers of at least a dozen top show business stars, as for example, Frank Sinatra (All Or Nothing At All) and Dinah Shore (Yes, My Darling Daughter). Here, Lawrence describes his Jewish upbringing, the discovery that he is gay, as well as his personal and professional relationships with the top performers of his era. He writes with humour, nostalgia and a candour not often found in memoirs. In addition...

Published by Thriftbooks.com User , 16 years ago
Well, whod a thunk it. After reading William J. Mann's magnificent 2001 tome BEHIND THE SCREEN, the story of how gay men and lesbians influenced production on both sides of the "silver screen" during Hollywood's Golden Age, I became intrigued by Mann's mention of Anderson Lawler, sort of the Anderson Cooper of his day. A part-time actor and full-time fun boy, Lawler was seen at all the right nightclubs, often glimpsed in photographs with more famous people, bringing up the rear as it were, most often as the roommate and putative boyfriend of Paramount contractee Gary Cooper, the multisexual Western and glamor star. Mann didn't get to speak to many people who had actually known "Andy" Lawler, but now it looks like he should have called Jack Lawrence, whose new memoir gives Lawler a big play. Lawrence had many run-ins with Lawler back in the day, sexual and otherwise. He was the "master of oral sex," Lawrence reports, going so far as to have all of his teeth removed to facilitate said mastery. "He showed me a gold cigarette case given to him by some Scandinavian royalty and inscribed, "To the greatest mouth in the world.'" Lawrence and Lawler lived in the same apartment building (in alphabetical order I assume) and Andy was often spotted with other Paramount stars such as Kay Francis and Marlene Dietrich, women whose sexual preferences were often gossipped about. Lawrence was born back in 1912, which makes him nearly 95 years old, but he's still bright as a tack and continuing to add to a list of hit songs that include "If I Didn't Care," "All or Nothing at All," "Tenderly," as well as the English words to "Beyond the Sea" by Charles Trenet. He even managed to outlive Linda McCartney, for whom he wrote "Linda" on the day she was born, and Rosemary Clooney, one of his very best ftiends, a woman whose tragic story he relates all over again in one of his very saddest chapters. Lawrence managed to adopt one of his closest "friends" which is quite a trick if you know how to do it! His book is an inspiration to all, teaching us a) never give up, b) don't let the bastards grind you down, c) keep striving for perfection, and d) above all else, have fun while you're living this life, because at the end of the day, there's no alternative but death. PS, he doesn't have much good to say about Sylvia, the wife of Danny Kaye. If you love her, skip chapter 27 of Jack's book!

Published by Thriftbooks.com User , 17 years ago
I just finished reading They All Sang My Songs that was loaned to me by a friend. It is simply fantastic. Jack Lawrence's autobiography is full of funny stories, some sad too, but is a very rich, entertaining and easy to read book. His courage and honesty just blew me away. It is almost impossible to stop once you start reading. Jack's narration of his 92 years of life is really an amazing option for those who like good books. I highly recomend it for everybody, even those who do not have the habit of reading biographies.

A wealth of anecdotal stories drawn from an unusual life

Published by Thriftbooks.com User , 17 years ago
Jack Lawrence was a successful song writer whose melodies and lyrics helped to launch more than a dozen top show business stars including Frank Sinatra ("All or Nothing at All"), Bobby Darin ("Beyond the Sea"), Rosemary Clooney ("Tenderly"), Dinah Shore ("Yes, My Darling Daughter"), and The Ink Spots ("If I Didn't Care"). In his autobiography, Lawrence describes his Jewish upbringing in Brooklyn, his difficult and distressing realization that he was gay, and his show business career ups and downs. Readers will also have an insider's view of the music industry's Big Band era, as well as Lawrence's personal and professional relationships with the top performers of his day. They All Sang My Songs: The Times Of My Life is a memoir laced with humor, candor, and a wealth of anecdotal stories drawn from an unusual life. Highly recommended reading, They Sang All My Songs is enhanced with many of Lawrence's lyrics and the stories behind their creation as well as the inclusion of two 16-page photo inserts.

Published by Thriftbooks.com User , 17 years ago
Jack Lawrence was a name I had always known, but never really knew. I saw Ray Striklyn play Tennessee Williams at the JACK LAWRENCE THEATER. I had seen the Broadway show, I HAD A BALL written, in part by JACK LAWRENCE. I knew the words for the song TENDERLY probably better than my own name. Who wrote the song? JACK LAWRENCE. So it was then, when I saw a mention of Mr.Lawrence's autobiography THEY ALL SANG MY SONGS, I decided to take a chance and buy it. What a terrific decision! Lawrence's book is a memoir of over ninety years, and in those years and in his pages, Mr. Lawrence covers the immigration experience, World War Two, the big band era and Hollywood and Broadway, all with a delightful writing style that makes you feel as though you are sitting with him in his country home, a drink in your hand and listening as he spins his delightful tales. His anecdotes are priceless, his gossip juicy, his insight into the world of popular music enlightening and his view of the world fascinating. Added to all of the above, and possibly even more important, depending on who is reading this book, is the story of Mr.Lawrence's personal life; his coming out when the country was even more homophobic than it is now, his lovers and, finally, his pride in who and what he is. If you are looking for Proust, look elsewhere, but if you are looking to spend some delightful hours with a terrific story teller, look no further. JACK LAWRENCE is your man! After reading this charming book, he certainly is mine!
Trustpilot
Copyright © 2022 Thriftbooks.com Terms of Use | Privacy Policy | Do Not Sell or Share My Personal Information | Accessibility Statement
ThriftBooks® and the ThriftBooks® logo are registered trademarks of Thrift Books Global, LLC