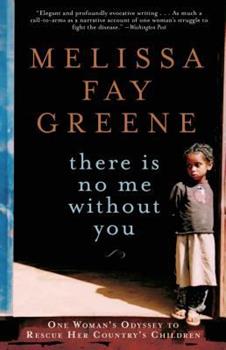 There Is No Me Without You: One Woman's Odyssey to Rescue Her Country's Children

Two-time National Book Award nominee Melissa Fay Greene puts a human face on the African AIDS crisis with this powerful story of one woman working to save her country's children. After losing her husband and daughter, Haregewoin Teferra, an Ethiopian woman of modest means, opened her home to some of the thousands of children in Addis Ababa who have been left as orphans. There Is No Me Without You is the story of how Haregewoin transformed her home...

A REMINDER OF THE GENEROSITY OF THE HUMAN HEART

Published by Thriftbooks.com User , 15 years ago
Haregewoin Teferra's story is precisely what the world needs to hear - a powerful reminder that one person can make a difference. As read by voice performer Julie Fain Lawrence this story is straightforward and true. While it would have been easy for the actress to lapse into sentimentality she never does so, speaking strongly, courageously, which certainly befits the life of Haregewoin. A resident of Ethiopia, Haregewoin was devastated when she lost both her husband and her 23-year-old daughter within the space of five years. How does one react when everything in life they hold dear is taken from them? She became a recluse, isolating herself in a tin walled compound close to her daughter's grave. It was as if there was nothing on earth left for her and she was simply waiting to die. All of this changed when a priest brought a teenager, orphaned by the horrifying AIDS pandemic that is sweeping their country, to Haregewoin. Then he brought another. As she began to care for these young ones her life changed and so did theirs. It didn't take long before it was known that Haregewoin offered a haven for the lost - a baby was left at her doorstep, a grandfather gave up grandchildren he could not afford to feed, a young boy whose mother had died and whose father was terminally ill. Soon, there were sixty children in her care. A mighty task for a middle-aged 4' 8" tall woman. Yet she rose to it and more - she did so gladly, heroically. Yes, this is a tragic story in many ways but it is also a hopeful one, a reminder of the resiliency of the human spirit and the generosity of the human heart. - Gail Cooke

Published by Thriftbooks.com User , 15 years ago
I have a few suggestions for those of you about to begin "There is No Me Without You." First, do not attempt to read this book while having coffee and hot chocolate at Starbucks with your ten year old son. You will cry. He will be mortified. Second, do not read the chapter about Haregewoin's daughter, Atetegeb, right before you drift off to sleep. Your dreams will certainly be haunted and unsettling. In your insomnious state, you will find yourself at the bedsides of your own children, gratefully watching them sleep and breathe. Finally, do not so much as open the first page if you are facing any pressing deadlines or tasks (taking care of your children, for instance). Your laundry WILL pile up. Your children WILL go to school having eaten cookies and chocolate milk for breakfast. Your dog WILL look at you pleadingly to finally feed him, because you WILL NOT be able to put this book down. I felt it only fair to warn you.

Wow! Don't miss this one!

Published by Thriftbooks.com User , 15 years ago
As the mother of two Ethiopian daughters I found this book to be incredibly interesting and touching. The statistics about the problem of AIDS in Africa are jawdropping. But the heart of the book is the story of this woman and the children she helps. Though non-fiction, the book reads like a novel. I read it cover to cover in two very long evenings. A week after I finished it, I was already thinking about reading it again. Except I also wanted to share it with everyone I know-- what a dilemma! I may be buying another copy or two. Read this book for yourself. You will be entertained. Your heart will be touched. And your view of the world will be broadened.

A World-Changing Book I hope!

Published by Thriftbooks.com User , 15 years ago
I completely agree with the first reviewer's comments. Ms. Greene manages to tackle a topic that reduces many of us to despair and hopelessness with grace, clarity, and even wit. More than any other book I've read on the AIDS crisis, this one is a real page-turner too. The compelling tale of Haregewoin Tesferra, a reluctant and flawed heroine, should engage anyone who cares about the fate of the most vulnerable children on the planet--those orphaned when their parents succumb to HIV/AIDS because no treatment is available to the vast majority of African victims. Ms. Greene doesn't let anyone off the hook for this monumental global injustice but she does suggest ways that every single one of us can be part of the solution. With her engaging descriptions of individual children among the 12 million or so estimated AIDS orphans, the author makes them as real as the children who sit at my breakfast table complaining about the brand of breakfast cereal available. This terrific book deserves a huge audience--and I'm going to start with my own teenage children!

Published by Thriftbooks.com User , 15 years ago
I don't know about you, but I am not one of those people who looks at the vast problems of Africa, Orphans and the global spread of AIDS and says, "Yeah. I can wrap my mind around that." Yet after coming across THERE IS NO ME WITHOUT YOU, an incredible book about this very subject, I feel differently. It was the subtitle, "One woman's odyssey to rescue Africa's Children" that made me brave enough to crack open such a tome. Anyone can relate to one person's story, one person's desire to rise above the self. The author is clearly a person who thinks about community, her journalist instincts mingling with a mother's compassion when she read of the "ridiculous number" of African orphans---twelve million and counting. "Who is going to raise twelve million children?" she wondered, and went to find out. She found this widow in Ethiopia, Haregewoin Teferra, who dealt with grief by taking in children no one else wanted-one, and then a few, and then a staggering amount--and still counting. The author, Melissa Fay Greene, has even adopted some Ethiopian children herself, in addition to her own four kids. Yet if this was just a sweet book about loving mothers across the continents I don't think it would still be haunting me and spurring me to some action. Greene weaves throughout this amazing tale the larger story of how this all happened---the global spread of AIDS, the attempts to stop it, the horrid inequities. Right now in western countries a relatively healthy person living with AIDS is popping some pills that would save the life of an African who doesn't know such medicine exists, couldn't obtain it if she knew it was out there, and will die due to this cold, hard fact. Whose fault is this? Greene makes it clear---drug companies, complicit governments (no U.S. administration, republican or democrat, gets off the hook here), and a myriad of logistical complexities. But here's the thing: this book is not depressing. The writing is lively, even witty, with tons of great stories. This book is about love, and investment in children, an original tale of good, imperfect people doing what they can. You meet these vulnerable, tough little kids,so much like kids anywhere, you understand a beautiful faraway culture, and you think about what you can do. I reiterate:this book isn't depressing---not because the calvary comes and saves the day in the form of this smart author or her noble heroine---but because you get the sense that we're the calvary. I've already done one small thing about this, yet for a country with so much need, it feels huge. So many fights these days seem not worth fighting. You read THERE IS NO ME WITHOUT YOU and you're just so happy to find a reason to get on the horse.
Copyright © 2020 Thriftbooks.com Terms of Use | Privacy Policy | Do Not Sell My Personal Information | Accessibility Statement
ThriftBooks® and the ThriftBooks® logo are registered trademarks of Thrift Books Global, LLC