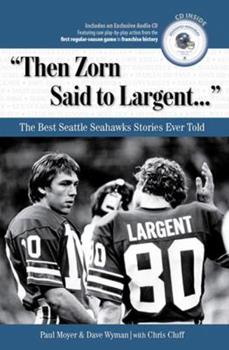 Then Zorn Said to Largent: The Best Seattle Seahawks Stories Ever Told [With CD]

Written for every sports fan who follows the Seahawks, this account goes behind the scenes to peek into the private world of the players, coaches, and decision makers all while eavesdropping on their personal conversations.From the Seattle locker room to the sidelines and inside the huddle, the book includes stories about Mike Holmgren andChuck Knox, among others, allowing readers to relive the highlights and the celebrations."

Checking up on old friends

Published by Thriftbooks.com User , 12 years ago
I thoroughly enjoyed this quick read. It is a gossipy little book that gives some chuckles and answers some questions. For instance, I finally learned why the Nordstrom family sold the Seahawks to Ken Behring. It covers character sketches and personal histories of many players from the past. Having been a fan of the Seahawks since their inception, it was interesting to read about the personal side of great guys from the past like Chuck Knox, Kenny Easley, Joe Nash and many others. It covers what was going on with the team from season to season, the psychology of winning and losing. Paul Moyer and Dave Wyman have with the help of Chris Cluff written the book in a style which is similar to getting together over coffee and reminiscing. I have recommended it to friends both male and female who are Seahawk fans.

Published by Thriftbooks.com User , 13 years ago
Why is the book mistitled? Very simply because it is written from the viewpoint of two defensive players, defensive back Paul Moyer and linebacker Dave Wyman. "Then Zorn said to Largent" as the title gives the impression there will be a bunch of stories regarding the offensive players of the Seahawks- which there aren't. It makes me wonder if this wasn't done to sell books, since Zorn and Largent are among the most famous and recognizable Seahawks. Hence my rating of 4 stars. This isn't to say that this is a bad book, or uninteresting. I finished the book in a couple sittings and enjoyed it thoroughly. Some stories make you cring, while others are laugh out loud funny ("Oh Crap" on pgs 174-175 being the funniest IMO). I was a little disappointed some stories were not told at all. For example, there was nothing between the covers concerning the possibility of moving the team to L.A., something that Ken Behring was trying to pull off. It was only because of loyal Seahawks fans and the timely intervention of a new ownership group to prevent that from happening. So take the book for what it is- two defensive players telling stories from their experiences & viewpoints...to expect something more is unrealistic.

Published by Thriftbooks.com User , 14 years ago
A great read if you like the game of football. Great stories about how the game used to be more about football and less about the hype we see in the NFL today. The book provides a look at how physical and tough the players are in the NFL. Moyer playing with a ruptured testicle (ouch!) Wyman being traded to San Francisco and then sent back because he could not pass the team physical(bad shoulder), but then being on the field a few weeks later for the Seahawks with the same bad shoulder. You do not need to be a Seahawk fan to enjoy this book. Kind of a real life version of a watered down North Dallas Forty.

Then Zorn said to Largent

Published by Thriftbooks.com User , 14 years ago
I enjoyed this book from cover to cover. I am a long time Seahawk fan and loved the 80's football players. This book made me laugh out loud. Melanie Bofto

THIS IS A FANTASTIC BOOK-ie. THEN ZORN SAID TO LARGENT

Published by Thriftbooks.com User , 14 years ago
I FOUND THIS BOOK TO BE ACCURATE AND TRUEFUL IN THEIR FACTS....A WONDERFUL BOOK, ESPECIALLY FOR A SEAHAWKS FAN. I FINISHED THE BOOK IN ONE DAY. SO THAT TELLS YOU SOMETHING. BUT, I HAVE TO TELL YOU I AM VERY BIASED. YOU SEE PAUL MOYER IS MY SON. WHAT A WONDERFUL SON HE IS TOO....HONEST, LOVING AND VERY PATRIOTIC. A GOOD CHRISTIAN WHO GOES OUT OF HIS WAY TO HELP OTHERS, NEVER EXPECTING ANTHING IN RETURN. THE WORLD IS A BETTER PLACE WITH PAUL MOYER IN IT. SINCERELY, JAMES R. MOYER
Trustpilot
Copyright © 2022 Thriftbooks.com Terms of Use | Privacy Policy | Do Not Sell My Personal Information | Cookie Preferences | Accessibility Statement
ThriftBooks® and the ThriftBooks® logo are registered trademarks of Thrift Books Global, LLC