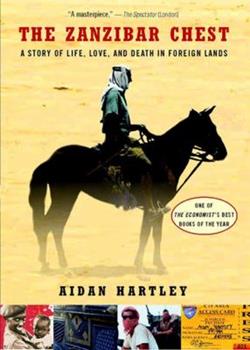 Hartley, an acclaimed?frontline reporter who covered the atrocities of 1990s Africa, embarks on a journey to unlock the mysteries and secrets of his own family's 150-year-colonial legacy in Africa. A beautiful, sometimes harrowing memoir of intrepid young men cut down in their prime, of forbidden love and its fatal consequences, and of family and history. and the collision of cultures over the enduring?course of British colonialism in Africa?that...

Truth about Africa told so well it is poetic

Published by Thriftbooks.com User , 14 years ago
This is the best memoir of Africa I have read. The honesty and introspection is stunning. Adrian Hartley's prose is so beautiful it is almost poetry. The first below is inspired by this wonderful book, the second is from the book: Africa Is Bathed In Light Inspired by Adrian Hartley's The Zanzibar Chest Rising before dawn Waiting for sunrise The deep light reveals Everything in incredible detail. The morning is awash In color and shadow until Blinded by the orange sun's ball I'm trapped in the crescendo of radiance As Africa is bathed in light, and The world becomes two-dimensional. Somalia from Adrian Hartley's The Zanzibar Chest In the all out war Of Everybody Against Everybody Lies a grim paradox: If you have nothing, You Starve. If you have something, You are attacked. Either way, You get killed.

Could Not Stop Reading

Published by Thriftbooks.com User , 15 years ago
A finely crafted account of the gritty, dangerous, sometimes glamorous experiences of a journalist in war-torn Africa. Gives the reader a new appreciation for those who risk their lives to bring us the news. Highly recommended!

Not much more to add

Published by Thriftbooks.com User , 15 years ago
The other reviewers have said it all. I HIGHLY recommend this book to anyone who enjoys a heartgripping, true-life adventure. The author has an eloquent prose, and the book leaves the reader yearning for more tales of Mr. Hartley's exploits. A++

Harrowing, but worth it

Published by Thriftbooks.com User , 18 years ago
There are times when reading this book that the images finally sink in and you sit in your little oasis of the suburbs and realize you can't even begin to comprehend what happened in Somalia or Rwanda and you just ache. Then Hartley turns it around again with his story of Davey's life or the people he worked with and you get a history lesson and a glimpse of this amazing continent that draws him back and amazing people who witnessed or tried to help. Its a history lesson, a memoir and fascinating. Not an easy book to always read, but its harder to try and put it down.

Romantic, absurd, gripping - you can't put this book down

Published by Thriftbooks.com User , 18 years ago
I picked up this book based on its cover artwork and the title, which sounded romantic and intriguing. I was not at all prepared for the author's harrowing accounts of his years in East Africa as a stringer for Reuters, or for the lingering effect this book has had on me. While he uses bits of his family history and the interesting story of one of his father's best friends as the glue to hold his tale together, The Zanzibar Chest is essentially a memoir of the author's own experiences as a journalist covering the century's most forgotten wars and hot spots: Rwanda, Burundi, Congo, Somalia, Sudan, Ethiopia. While other correspondents covered the glamorous European war - the Balkans - Hartley and his band of fellow cowboys lurched from country to country, hitching rides on UN cargo jets, on convoys of armed guerrillas, or travelling hundreds of miles by foot in the company of whichever militia would take them along - usually at their own expense. The descriptions of war, and in particular the unique hopelessness of African civil wars (ignored by the rest of the world), are written in flawless prose - evocative, truthful, but with a journalist's precision. The book becomes much more personal, however, as Hartley describes the deaths of his Reuters colleagues - several of whom died in a most horrific incident in Somalia. His retelling of the story of the four journalists stoned to death by an angry mob in Mogadishu will send chills down any reader's spine: it is this chapter that eventually brings the book into focus and reveals its purpose. (And it will illuminate and inform readers of Black Hawk Down.) The personal details that Hartley includes in the book - a full-blown love affair in the midst of the Rwandan genocide, his own use and abuse of drugs and alcohol to numb the pain - occasionally render him pathetic, but they also allow us to feel more than sympathy for him. Not many people could have survived the conditions that Hartley did, let alone live to write about it in such elegant prose. The futlity and senselessness of war and death in Africa is conveyed through a series of heartbreaking stories, and one can't help but take away an overwhelming sadness at the fate of most African nations and their people. By telling the story of Peter Davey - his father's best friend and an almost typical example of the 'white man in africa' in the early 20th century - Hartley manages to capture some of the inexplicable romance and allure of the continent and its people (although much of Davey's story takes place in the Yemen). Westerners will always try - and always fail - to put their finger on what it is that draws us to the 'other', whether we call it Orientalism or Colonialism or something else. Hartley's love for his home - he was born and raised and continues to live in Kenya - is obvious and contagious. His despair over his adopted home's fate is equally tangible. The Zanzibar Chest is an exceptionally graceful and stirring debut, and although one
Copyright © 2020 Thriftbooks.com Terms of Use | Privacy Policy | Do Not Sell My Personal Information | Accessibility Statement
ThriftBooks® and the ThriftBooks® logo are registered trademarks of Thrift Books Global, LLC