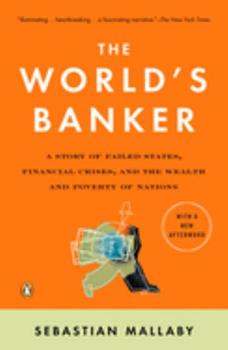 The World's Banker: A Story of Failed States, Financial Crises, and the Wealth and Poverty of Nations

Never has the World Bank's relief work been more important than in the last nine years, when crises as huge as AIDS and the emergence of terrorist sanctuaries have threatened the prosperity of billions. This journalistic masterpiece by Washington Post columnist Sebastian Mallaby charts those controversial years at the Bank under the leadership of James Wolfensohn--the unstoppable power broker whose daring efforts to enlarge the planet's wealth in...

Published by Thriftbooks.com User , 17 years ago
Sebastian Mallaby, editorial writer and columnist at the Washington Post, has come up with a page-turner on the challenges of promoting development, as seen through the eyes of World Bank President James Wolfensohn. Many success stories of the Bank's work are described in fascinating detail. In Bosnia, according to Mallaby, the Bank played an important role in brokering a peace deal between Serbs and Croats and was successful in quickly providing money and expertise for the reconstruction. In Uganda, the Bank was flexible enough to allow a home-grown poverty reduction strategy to take root and to nurture it. But the Bank's failures are also described unsparingly. Mallaby presents a detailed study of how the Bank's condoning of corruption in Indonesia was the root cause of many of the country's troubles during the Asian crisis. He also says that the Bank late and timid reaction to fight AIDS "remains inexcusable." The portrayal of Wolfensohn is likewise two-sided. Mallaby credits his "instincts as being ahead of his peers" on the need for providing debt relief in the mid-1990s and on tackling corruption. Wolfensohn is also recognized as being instrumental in pushing for greater country ownership of reforms and for the decentralization of the Bank through the relocation of most country directors to the field. At the same time, the book has candid descriptions of what Mallaby considers to be Wolfensohn's failures, for instance his tendency to share "credit with no one." North-based NGOs come across in Mallaby's portrayal as the villain of the piece, Lilliputians who tie down the Bank and keep it from doing good. The NGOs, says Mallaby, have killed worthy projects by overstating the likely labor and environmental impacts and insisting on standards that developing countries can ill-afford. For example, in Laos "the environmental standards that the Bank proposed for a megadam project matched those of a country like Sweden; this was like telling the Laotians that they must not travel in motorized vehicles unless they purchased brand-new Volvos with passenger air bags." Not all Bank failures are the fault of NGOs; sometimes, says Mallaby, the Bank cannot succeed because of lack of cooperation by the client. In 1998, the Bank wanted to execute an project to combat AIDS in Russia, but the country's health ministry did not want to acknowledge the problem. When the ministry came around, Russian pharmaceutical makers blocked the Bank, fearing that it would open the drug market to foreign competitors. Russia's medical establishment was also opposed as "hospitals had a large and antiquated infrastructure for treating TB, which would be rendered redundant by the Bank's modernizations." Mallaby's sympathetic portrayal of the Bank contrasts with some of the harsh characterizations of other observers. In his recent book Why Globalization Works, Martin Wolf calls the Bank a "fatally flawed institution," whose source of "failures was its commitment to lending." Descr

Changes Your View of the World

Published by Thriftbooks.com User , 17 years ago
During the current Presidential race I've heard a lot about the current world situation. But only about a very few places. We've heard about Iraq, North Korea, Afghanistan, and a little bit about a few others. But it's a lot bigger world than that. And at the middle of just about everything has been James Wolfensohn. For the past nine years he has been president of the World Bank. He has become an almost bigger than life character and has molded this unweildy to fit his image. During these years there have been financial crises, the AIDS outbreaks in many of the poorist countries, the emergence of terrorists sanctuaries in states that have basically failed and an immense amount of corruption. Formed as one part of a trio, along with the United Nations and the International Monetary Fund, the World Bank was to fund the re-development of Europe and Japan after World War II. As time went on, it became the lender of last resort to developing countries and in a perpetual tug of war between the left and right views. Wolfensohn, is a brilliant, vain, well-meaning, short-tempered, self made multi-millionaire. He took over determined to remake the World Bank. He came up against a very messy reality of governments that didn't work, and problems almost beyond comprehension let alone solution. The resulting book is an eye-opening presentation of the challenges and contradictions of the West's efforts to enlarge the world's wealth. Very well written, you will come away from this book with an entirely different view of the world. Excellent.

Published by Thriftbooks.com User , 17 years ago
This is a wonderful book. It is really three stories. One is a story of how the West has tried to tackle global poverty, its failures, successes and U-turns. The other is a story about the West's principal instrument for these policies, the World Bank. Any large organisation, packed with interesting people, dysfunctional teams, and huge challenges will always have a good story inside it and this is no exception. The third is a biography of the leader of this organisation and his influence upon it. These three narratives, all interesting in their own right, are skillfully interwoven to produce a trully thumping read. A real page-truner.

Published by Thriftbooks.com User , 17 years ago
Sebastian Mallaby uses the story of the impossible yet impressive Jim Wolfenson as a vehicle through which to scrutinize the challenges, successes and failures of world development. These two fascinating stories complement one another brilliantly - the former outrageous and fun; the latter moving and important. Mallaby's intelligent and lively writing makes the complex and complicated accessible and understandable, yet there is no feeling of dumbing down the issues. So often vilified, in here The World Bank's sometimes helpful, sometimes destructive, always worthy attempts at helping the world's poorest are analyzed in the context of international politics and environmental issues. Anybody interested in protecting America in this age of terror needs to get their heads around failed states, and this book is the place to start.

Published by Thriftbooks.com User , 17 years ago
This is a very interesting book with two main themes. The first one is a biography of James Wolfensohn, the President of the World Bank since 1995. The second one is about the inner workings of the World Bank, a not so well understood institution. The author covers both themes equally well. James Wolfensohn comes across as a brilliant and irascible complex character. He exudes charm, vision, and eloquence in the outside world towards NGOs, other governmental institutions, States, and the Media. In this capacity, he is not unlike Bill Clinton. On the inside, he is a tyrannical, terrorizing manager displaying frequent tantrums to get the cultural changes and the results he wants from his staff. Here this boss from hell comes across more like a John McEnroe loosing it on a tough line call. The author's description of the World Bank is equally interesting. At first, the Bank comes across as an autocratic institution which knows what is best for the country it lends to. Invariably, the solution to all the World's problem according to the Bank are mega projects where private consultants and Western companies make a ton of money, the Bank books huge loans, but the country in question can ill afford. Under Wolfensohn influence, the Bank has become more sensitive to the environmental and cultural impact of its financing activities. This is in part due to the Bank opening up a dialogue with NGOs. In this regard, Wolfensohn tenure at the Bank seemed to have been rather successful, as it has radically changed the culture of the Bank. In view of the above, I strongly recommend this book. If you are interested about economics, institutions, and policy, I also recommend a couple of excellent books. These include "A Term at the Fed" by Lawrence Meyer. This book uncovers Alan Greenspan's management style, and the inner workings of the Federal Reserve (another not so well understood institution). The other book is the excellent "In an Uncertain World" by Robert Rubin, the brilliant former Secretary of the Treasury under Bill Clinton.
Copyright © 2022 Thriftbooks.com Terms of Use | Privacy Policy | Do Not Sell My Personal Information | Accessibility Statement
ThriftBooks® and the ThriftBooks® logo are registered trademarks of Thrift Books Global, LLC