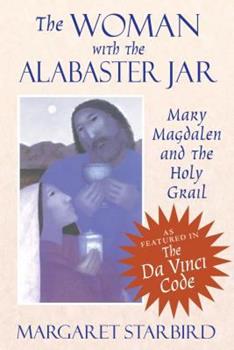 The Woman with the Alabaster Jar: Mary Magdalen and the Holy Grail

Margaret Starbird's theological beliefs were profoundly shaken when she read Holy Blood, Holy Grail , a book that dared to suggest that Jesus Christ was married to Mary Magdalen and that their descendants carried on his holy bloodline in Western Europe. Shocked by such heresy, this Roman Catholic scholar set out to refute it, but instead found new and compelling evidence for the existence of the bride of Jesus--the same enigmatic woman who anointed...

Published by Thriftbooks.com User , 18 years ago
This is a very good book. The author draws heavily on Holy Blood, Holy Grail for her factual data in addition to her own research, but she makes her point more clearly and The Woman With The Alabaster Jar is much more readable. Holy Blood, Holy Grail contains more dense verbiage, and the authors develop their facts and surmises slowly and their themes very carefully, item by item. It gets tedious at times. Not so with Margaret Starbird. She comes right out with it.The thrust of both books is that Yeshua bar Yosef (better known by his Greek name, Jesus) was married to Miriam of Bethany (better known as Mary Magdalene) and sired a daughter by her. After his crucifizion, Mary moved to Egypt where her child, Sarah, was born, and then to Provence on the Mediterranean coast of France.The Catholic church tried to stamp out and eradicate the idea that Mary and Jesus were married and had a child because it threatened their orthodox views, and murdered 15,000 people in the Provence area in their effort, who believed the fact that Mary and Jesus had started a bloodline which survives yet. In the Inquisition, many thousands more were killed for the same reason: their "heresy," in the eyes of the church.The theory is that the organizations known as the Knights Templar and the Priory of Sion protected the secret genealogy of the holy bloodline, and the proofs of the sang raal (holy blood, which became known as the Holy Grail).Starbird and the three authors of Holy Blood, Holy Gail make a plausible case--even a convincing one.These hypotheses were the background for the recent best-seller, The Da Vinci Code, by Dan Brown, who also drew heavily on Holy Blood, Holy Grail for his fictional mystery.The research is very thorough, although there is clearly much persuasive speculation involved.I do not recommend this book for orthodox Christians who are convinced that the Bible, as they know it, is the inspired word of God and not to be questioned. This is a book better suited to people with a background in religious history, who are familiar with the Council of Nicaea and its activities, and the part played by Constantine and Theodocius in suppressing the so-called "heretical" gospels and other writings that were denied entry in the canon of scripture, and the editing, deletions and additions made to those that were included.It is not clear that the truth of the matter is portrayed in these books, but it is quite clear that there is much evidence to support their plausibility. On balance, this is a more likely story than the virgin birth or resurrection of the dead, as portrayed in the orthodox version of the Bible.Joseph (Joe) Pierreauthor of The Road to Damascus: Our Journey Through Eternityand other books

Published by Thriftbooks.com User , 18 years ago
In her beautiful book THE WOMAN WITH THE ALABASTER JAR Margaret Starbird lays out a compelling case for seeing Mary Magdalen as the `lost bride' of Jesus. Whether you believe the Jesus story was a historical event or is a myth, if you have an interest in the Grail and/or symbolism, you will want to read this book. Apparently, many Europeans, especially in France (Provence) believe(d) the Magdalen escaped Jerusalem after her husband Jesus was executed. Eventually, she traveled to what is today Marseilles, where every year, the local people celebrate her arrival on the Magdalen's feast day. The `fathers' of orthodox Christianity were so appalled by the notion that Jesus might have had sex and produced a child let alone married the Magdalen who some how or another became linked with prostitution, that beginning in the 4th Century the church attempted to squelch the "heresy". By the Middle Ages, the church had instituted the Inquisition. However, the harder the Inquisitors pressed "heretics" like the Cathars, the more clever they became at disguising their truth. Using European fairy tales, water marks on paper printed during the Middle Ages (and frequently found in bibles!!), and paintings of the Masters like Fra Angelico, Starbird shows how the message of the heretics was hidden in plain sight. She suggests that even the Tarot cards which appeared in Italy just after the "last" Cathar was hunted down in Spain, may have been a condensed heretical catechism. Ever wonder why some of Botticelli's `Madonnas' are dressed in red when the Roman church instructed artists to depict the Madonna in blue and white? Did you know a branch of the US Army wears the insignia of the Magdalen on it's uniform, and celebrates a dance ball every year on the feast day of saint whose likeness to the Magdalen is uncanny? Do you know why the `Little Mermaid' is named Ariel, and Snow White "died" from a poison apple (went to sleep)? Did you know Cinderella may be related to the `Black Madonnas' of Europe including one venerated by Pope John Paul? Starbird says she set out several years ago to refute the "heresy" she discovered in HOLY BLOOD HOLY GRAIL by Baignent, et al. and discovered not only were these authors onto something there was a whole lot more to share. This is a wonderful, provocative book.

Published by Thriftbooks.com User , 22 years ago
The author presents a chain of indirect proofs to support her belief that Jesus was married to Mary Magdalen. She states that this is a tenet of heresy widely believed in the Middle Ages; that fossils of the heresy can be found in numerous works of art and literature; that it was vehemently attacked by the hierarchy of the established Church of Rome and that it survived in spite of relentless persecution.This book is a courageous exploration of an extremely delicate question. Mary Magdalen is called a penitent prostitute by the Church. The original story of the anointing of Jesus at Bethany by the woman with the alabaster jar may have been misinterpreted by the author of Luke's Gospel since the anointing was similar to the familiar ritual practice of a sacred priestess or temple "prostitute" in the Goddess clults of the Roman Empire.Mrs. Starbird does an excellent job of researching european history, heraldry, the rituals of Freemasonry, medieval art, symovlism, psychology mythology, religion and the Hebrew and Christian Scriptures to discover that the meaning of the Holy Grail could be the lost bride of Jesus and the female child she carried within her.

A Beautiful and Inspiring House of Stone

Published by Thriftbooks.com User , 23 years ago
I am very impressed with Margaret Starbird's scholarly work in her book "The Woman with the Alabaster Jar". It tells the story of the lost Bride and provides strong evidence for the sacred marriage at the heart of Christianity, that of Jesus and Mary Magdalen. It is significant that all four Gospels record the anointing of Jesus by a woman with an alabaster jar of aromatic nard. In middle-eastern liturgical practices surrounding the ancient rites of the "sacred marriage" the anointing of the sacrificed bridegroom/king was a sacred ceremony reserved to his bride. The Gospel narratives describe the pre-nuptial anointing of Jesus by the woman with the alabaster jar and contain other elements from this ancient ritual.On seven of eight New Testament lists of the women who walked with Jesus, Mary Magdalen's name is mentioned first on the list. She was clearly "first lady" in the eyes of the early Christian community. Some early Church theologians identified the Magdalen as the model of "church" (ekklesia) whom Christ "loved so much, that He gave his life for her."More compelling facts from Scripture and history are included in Margaret Starbird's work. She follows a trail of evidence that leads through Egypt, to the south of France, and into important historical events in Europe.Most significant is the medieval legend of the Holy Grail (sangraal), which secretly celebrated Mary Magdalen as the Bride of Christ. The "sangraal" is the "sacred blood" -- the royal lineage of Jesus. Because the legend of the Holy Grail contained and preserved the truth about Mary Magdalen, it was ruthlessly suppressed by the Inquisition. In an effort to discount her significance, Mary Magdalen was labeled a prostitute, but she was really the "Beloved" -- the bride of Jesus.Restoring the sacred union of Jesus and Mary Magdalen to the heart of our Christian story provides us with a model of holiness based on the sacred union of the masculine and the feminine. It affirms the true holiness and significance of women as PARTNERS in the future practice of our Roman Catholic tradition.I have talked with Margaret Starbird. When she embarked on her research, her intent was to disprove the possibility of Jesus' marriage, but the facts led her in a surprising new direction that provides a wonderful healing message for us all. The Woman With The Alabaster Jar provides the facts and history that will explain why women hold the key to many of the problems faced today by our Roman Catholic Church.Father John Shuster, Roman Catholic Priest
Trustpilot
Copyright © 2022 Thriftbooks.com Terms of Use | Privacy Policy | Do Not Sell My Personal Information | Accessibility Statement
ThriftBooks® and the ThriftBooks® logo are registered trademarks of Thrift Books Global, LLC