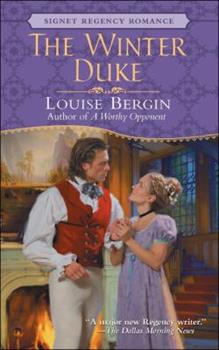 Miss Lydia Grenville finds solace sketching in the woods. That is, until a handsome-but-ruffled gentleman of obscure background grows fond of the forest, too. Now, if Lydia can look up from her art long enough to notice, there just might be a surprise awaiting her.

Published by Thriftbooks.com User , 16 years ago
It took me a few chapters to get into the book, but by halfway through I was into it and really enjoyed it after that. The story got better than what I had figured would be just another predictabe regency romance. Good read!

Published by Thriftbooks.com User , 16 years ago
I loved Lousie Bergin's debut book - "The Spinster and the Wastrel" which was a prestigious Golden Heart finalist. And this, her third book, is wonderful too. It's a perfect summer read by the sea or the pool... Here's what Romantic Times magazine had to say: "After suffering an unsuccessful season, Miss Lydia Grenville returns to her countryside home. One afternoon, while sketching neighboring Winterbourne castle, she meets a handsome man who introduces himself as "Alexander." John Penhope, new Duke of Winterbourne, is a scholar of the classics. Immersed in one of his books just before encountering Lydia, he accidentally says the wrong name when introducing himself. Ordinarily quite shy around women, he's amazed that Lydia finds his discussion of Greek history fascinating. But the bond they form is soon shattered when Lydia discovers that she's been spending time with The Winter Duke (3). Enamored with him-and, admittedly, his title-Lydia begins to imagine a grand future in Louise Bergin's latest. Passion, acceptance and propriety make the road to romance uncertain for this deserving couple."

Published by Thriftbooks.com User , 17 years ago
Lydia Grenville recently had her first Season in London... and she was most decidedly a failure. Never mind the fact that she had a few proposals here and there. She did not accomplish what she set out to do: capture a titled husband. The bookish Duke of Winterbourne only recently acquired his title. While strolling along his castle grounds, his comes across Lydia, sketching in the woods. He introduces herself as "Alexander", and she assumes he is the new duke's secretary. And a secretary is no match for a lady such as herself. Eventually, his real identity is revealed. And Lydia knows exactly what she wants. "The Winter Duke" is a very enjoyable book. Regency readers will like the traditional plot elements and sweetness, despite the lack of action. While not as strong as Louise Bergin's previous books, it is still an enjoyable read. 4 *'s
Trustpilot
Copyright © 2022 Thriftbooks.com Terms of Use | Privacy Policy | Do Not Sell My Personal Information | Accessibility Statement
ThriftBooks® and the ThriftBooks® logo are registered trademarks of Thrift Books Global, LLC