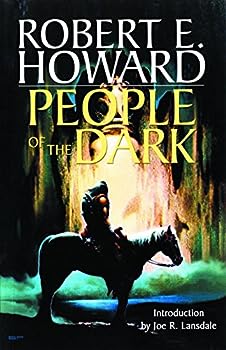 This description may be from another edition of this product. The third volume of the Weird Works of Robert E. Howard continues reprinting Howard's fantasy from Weird Tales and Strange Tales in order of original publication. All texts have been meticulously...

ROBERT E. HOWARD - THE BEST OF THE BEST!

Published by Thriftbooks.com User , 13 years ago
Robert E. Howard (1906-1936) was and is still the best story teller wordsmith of action, adventure, horror, and more of all time! The Weird Works is some of REH's best stuff! My favorite in this book is Queen of the Black Coast that has Belit who is Conan's true love. Belit is the first woman Conan stayed faithful with up until her ____. The poem To A Woman ("Though fathoms...") Moder American Poetry Galleon Press, 1933 is really creepy. Just the way I like um! REH was a genius. Must reads of his: The Last of the Trunk, The Never Ending Hunt, all Weird Works by Paul Herman, Blood & Thunder by Mark Finn, Selected Letters Vol 1-3 and Poetry by Rob Roehm, One Who Walked Alone by Novalyne Ellis REH's girlfriend, The Black Stranger, Lord Samarcand, Dark Horse comics Solomon Kane, Kull, All Conans, Bran Mak Morn, Cormac Mac Art, Two Gun Bob and all REH stories. My favorite is The Beast from the Abyss about cats. You can find this on REH websites. It's a real treat. Tell others about REH and keep visiting your local bookstores. I found some really inexpensive and out of print books of REH at some local Used Book Stores. MUST READ - Two Gun Bob! Superb insight into REH's mind and stories. Neat factoid, REH had only visit the sea shore once in his life! Get Two Gun Bob before it's gone! Check out the REH Foundation and Forum!

Published by Thriftbooks.com User , 13 years ago
This collection of stories by the illustrious author of Conan and Brak Mak Morn, Solomon Kane, and legendary others, takes readers into the golden age of sword & sorcery that was written better back in the day. Written grammatically correct in Old English that past authors like Edgar Rice Buroughs and Howard made this a refreshing reading experience that takes one back to yesteryear of high end adventure fantasy. A must read for Conan fans.

Published by Thriftbooks.com User , 15 years ago
This third volume in the series comes with beautiful cover art by Stephen Fabian and nine superb short stories (plus two poems) by the master of heroic fantasy. Every tale in the book is a great read, several of these being Lovecraft inspired, and there are fascinating characters: Cormac of Connacht, Solomon Kane, Black Turlogh, and Athelstane. I highly recommend it, and expect this series to only get better.
Copyright © 2020 Thriftbooks.com Terms of Use | Privacy Policy | Do Not Sell My Personal Information | Accessibility Statement
ThriftBooks® and the ThriftBooks® logo are registered trademarks of Thrift Books Global, LLC