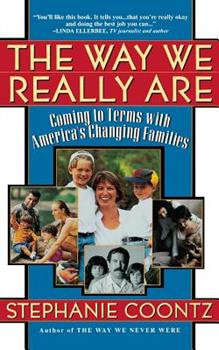 The Way We Really Are : Coming to Terms with America's Changing Families

This description may be from another edition of this product. The definitive edition of the classic, myth-shattering history of the American family Leave It to Beaver was not a documentary, a man's home has never been his castle, the "male breadwinner marriage"...

Taking on the myths that shape us

Published by Thriftbooks.com User , 15 years ago
"The Way We Never Were" is a book that will delight and amaze those interested in factual history and annoy those who like their history more...legendary. Author Stephanie Coontz's purpose is to turn a historian's eye on the ever-shifting patterns of American history, turning a cutting laser on the myths that still inform our politics and personal attitudes. Most of us have a reasonable familiarity with recent history - say, the last 50 years or so. There's a temptation then to assume that people in earlier ages shared our base assumptions - they were just us in different clothes. Coontz gently puts the lie to these assumptions, showing us that our ancestors and predecessors looked at the world differently and organized their societies along different lines. In the process, she destroys a number of hallowed national myths based on what is essentially a misreading of history. For instance, the myth of Rugged Individualism-the idea that America was founded by those who rejected governmental assistance-comes in for a thorough thrashing -- as does the idea that a man's house was his castle. In colonial America, says Coontz, government would take children away from their parents if they did not learn their alphabet by the age of six. Inability to read meant inability to read Scripture which meant an inability to be saved. Too, the rugged individualists who tamed the West were anything but. Sure, they worked hard to build their homes and harvest their crops. But without the national government's assistance in clearing the land of natives, building transportation networks and subsidizing land purchases, the westward expansion would not have occurred at the rate it did. To boot, the successful settlers were communitarian -- establishing homes near others, sharing tools and expertise. Those who chose to go it alone were the least successful, passing a culture of poverty and ignorance to future generations. Coontz's work is a welcome corrective to the still-flourishing myths of individualism. She has much to say to those who still think that success is their personal achievement, and who forget that success is often a collective exercise of an individual's work, government assistance (be it killing Indians or awarding tax breaks) and personal connections. Coontz takes on many other topics, including consumerism, working women, teenage pregnancy (the late 50s had the highest, not lowest, incidence of teen pregnancy), marriage, love, abortion rates through the centuries and much more. A fascinating and compelling read!

Published by Thriftbooks.com User , 16 years ago
I was born in 1970, and my childhood memories are of sun-bathed days riding my bike and playing with my friends in the safe streets of rural England. Mummies and Daddies formed coherent units, there was a real sense of community, and life has been downhill from there. Right? Except that, as an adult, I know better. One couple across the road were staying in a miserable marriage in which affairs were used to express anger; another neighbour beat the living daylights out of his wife; two children from my school walked miles to the police station to report that they were being beaten and starved; paedophile rings were being dealt with; cases of incest, rape, and violent crime were not so unusual; and the fact is that I have no memory of these things because they were kept from me. The argument that the past was better because one remembers it being so does not, I fear, hold water. Historians and sociologists fight a losing battle against nostalgia and the very human desire to return to a golden age when things were simpler, more wholesome, easier to deal with than the realities we face as adults. Books like Coontz's 'The Way We Never Were' are vital to understanding and facing the complexities of the world instead of retreating in fear to a world of projected simplicity and order that never really existed.

Published by Thriftbooks.com User , 18 years ago
It's not easy being a historian of the family. The media has an instinctive prejudice against the understanding of any ideas which are complex and subtle. Given the right and center right bias of much American political discourse it is hard for a liberal or socialist to get a word in edgewise. Much of the research occurs in scholarly articles that most people never hear of and which will only be noticed if they can be dramatic or alarming.So hats off to Pr. Coontz's wonderful work, which cuts through the cant of "family values." Coontz starts off by noticing the media's tendency to hype alarming and misleading figures. She defuses the infamous 1986 Newsweek suggestion that women over 40 have more chance of being killed by a terrorist than of marrying for the first time. She points out that one reason why parents may be spending 40% less time with their children since 1965 is that the number of children has dropped 28%. The next two chapters point out some of the mythologies of family life in the fifties, and the complex relationships between liberal ideology and the status of women. Really invaluable is the next chapter, on the conservative cant of "self-reliance." As she points out people have always had to rely on family partnerships, godparents, mutual neighborhood aid, ethnic and labour lodges: the Ayn Rand ideal is an utter fantasy. She points out that the Little House on the Prairie books were written by Laura Ingalls Wilder's daughter to remove all the help the family received from the community. More important she points out how the American west and American highways, housing and suburbs have all been generously subsidized. In 1988 federal tax subsidies for homeowners were four times as high as direct spending for low-income housing assistance. Coontz also points out that there is precious little evidence that welfare encourages two parent family break-up: a 1987 General Accounting Office report of more than one hundred studies found little connection. Other studies have pointed out that "high-benefit states tend to have a relatively lower proportion of their children in poverty than low-benefit states" while mothers on AFDC have only one-fourth the number of babies while they are on welfare as those mothers who are not. And though poverty programs in the United States were among the least generous in the OECD, they could work when they were allowed to even when the economy stagnated: infant mortality fell in half between 1965 and 1980, a far greater reduction than in the previous 15 years.Coontz provides an invaluable historical perspective on all sorts of issues, such as how the rise of a privatized family moralism coincided with the corrupt and selfish politics of the Gilded Age. If people are upset at the rise in premarital sex, they should note that it has helped reduce prostitution, where in 19th century Savannah there was one prostitute for every 39 men. Coontz also provides useful chapters on the complex natur

A must get for your local conservative politician

Published by Thriftbooks.com User , 19 years ago
Since its inception, the religious right has attempted to convince America that the world would be better and all of our social problems would be resolved if we could magically transport back to the 1950's as represented in Leave it to Beaver and countless other comedies designed to "imitate" the emerging WASP middle-class suburban lifestyle. Yet as Stephanie Coontz points out, this was a Hollywood myth that never existed in real life. Instead, women were maimed from illegal abortions, gays were bashed at an alarming rate, schools were segregated, the disabled were hidden and sexual and domestic violence supposedly did not happen to "good" people. Telling it like it really was is not a PC fairy tale, but a practical reality if we are to finally confront and undo some of America's social problems. Politicians, particularly on the right, have been successful in exploiting and appropriating this myth for their own personal means precisely because there have been few watchdogs to challenge them. Were this possible, we would discover the new left had its roots in the backlash against Senator Joe McCarthy and his communist witch hunts. The cover picture with a young Robin Morgan is particularly ironic in light of the fact that the former "Mama" child star reincarnated herself as one of the most prolific and articulate leaders of the new left and women's liberation in the 1960's. Family Values have become such an emotional election issue because we are not really sure what they mean. Sure, any politician (indeed most do out of a fear of being perceived as anti-family) can embrace the concept and even make a career out of such proclamations, but our realities have been less than stellar pictures. The section on teenage pregnancy and unwed mothers confirms that the higher rates occurred before the legalization of birth control and the relegalization of abortion and the only difference is that girls who chose to keep their babies are not shipped off to maternity homes or forced to leave school. Additionally, she points out the young girls who engage in sexual activity are not feminists because they are more likely than non-sexually active peers to have very strong dependence needs and desires as well as traditional gender roles. I also believe Coontz should have done more investigating on the prevalence of childhood sexual abuse and the legal system that essentially encouraged it by allowing it to go unchecked. In the greatest of ironies, the decade where GLBT Americans enjoyed the least amount of rights was also the times when child hood sexual abuse was the highest. However, I realize Coontz was trying to provide a general overview with this book and believe that the subsection could provide enough material for a separate book of its own.While I realize it may be difficult for some readers to reconcile starry-eyed visions with this more pragmatic account, the resulting intellectual growth is a concise picture of what America was really like. Perhaps now

Published by Thriftbooks.com User , 22 years ago
Americans, especially those of the conservative persuasion, tend to idealize the 'Fifties as Paradise Lost: schools taught readin', 'ritin', and 'rithmetic; sex was confined to the bedrooms of married couples; teenagers were virginal and children docile; God's in his heaven, Eisenhower's in the White House, all's right with the world ...In fact, as Coontz points out, the era wasn't all that innocent (her statistics on teenage pregnancies and shotgun weddings are a real eye-opener). Furthermore, the myth of the suburban two-parent, two-child family, self-sufficient economically and emotionally, was not only fostered and perpetuated for economic reasons, but a historical anomaly even in the U.S. (not to mention the rest of the world).What Roberta Pollack Seid did in "Never Too Thin" for the MetLife weight tables, and Susan Faludi did in "Backlash" for the assertion that "a single woman over 40 has more chance of getting killed by a terrorist than of getting married," Stephanie Coontz does for the nuclear family. Her political agenda shows at times, but in general the facts she marshals are persuasive no matter whether you agree with it or not.
Copyright © 2020 Thriftbooks.com Terms of Use | Privacy Policy | Do Not Sell My Personal Information | Accessibility Statement
ThriftBooks® and the ThriftBooks® logo are registered trademarks of Thrift Books Global, LLC