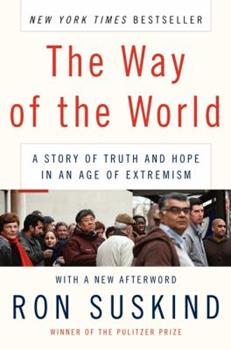 The Way of the World: A Story of Truth and Hope in an Age of Extremism

From Pulitzer Prize-winning journalist and bestselling author Ron Suskind comes an astonishing investigation of how America lost its way and the nation's daily struggle to reclaim the moral authority upon which its survival depends. Tracking down historic revelations and improbable hope from the Beltway to the farthest corners of the globe, Suskind delivers a stirring and strikingly original portrait of the post-9/11 world.

The Impact of Ignorance

Published by Thriftbooks.com User , 13 years ago
Ron Suskind's The Way of the World is a great book to read while we wait for a new president to take office. Suskind had excellent sources in the Bush Administration, but it's his ability to set the information he receives into cultural reality that makes his work extraordinary. In this book, particularly, he is able to show how policy was made in the intellectual vacuum of the White House and how it impacted the lives of individuals whose stories Suskind tells in careful detail. It was those stories--the Pakistani student shown compassion at Connecticut College on 9/11, the Colorado family who takes in a Muslim student and then must kick him out, the rural Pennsylvania family that has better luck with the student, the lawyer who takes on a prisoner at Guantanamo, the disillusioned intelligence insider who makes finding black market nuclear fuel his mission, among others--that kept me reading. His account of Benazir Bhutto's last days broke my heart. Yes, Suskind outs the Bush administration for creating whole cloth a letter to make the link between 9/11 terrorist Mohammed Atta and Iraq, but it's the process by which the letter was created and Suskind's account of all the opportunities Bush & Co. ignored to avoid war that I found most chilling. The subtitle, A Story of Truth and Hope in an Age of Extremism, captures Suskind's point that we must not lose sight of the values--the rule of law, the worth of the individual, the importance of reason, the power of education--that make our country great. I read a book (rather than a newspaper or a blog) for the kind of tapestry that an accomplished writer like Suskind can weave of myriad facts and experiences. The sum is indeed greater than the parts.

How Do You Spell Impeachable Offense ??

Published by Thriftbooks.com User , 13 years ago
Have mercy!! What to say. Saw the author in an inteview say it's written like a movie. True enough. It's a screenplay, shouldn't be any problem getting it into film. Only thing is, maybe where it belongs is on the committee where Rep. Kucinich's articles of impeachment are twisting in the wind. Now, about the book. It's beautifully written, incredibly finely woven, and perhaps the most intrigueing contribution Suskind has made is the least appropriate for a Hollywood film and the most urgent, other readers can say. Suskind's appeal is for a return to authenticity, moral authority, goodness actually, between people, nations, governments, in public life. Seem to suggest (maybe I imagined it) that we might not survive as a people if we don't change back to what we really are, really want to be, really need to be, and can be. There's an interesting powerful appeal to "selflessness" and right out of the matrix of international intrigue, moral crimes, murders, heartlessness, and the despair of it all. So odd that the characters nearly all seemed trapped in lives either ruined or nearly ruined by the lack of those cardinal values. It's a book about values, human, really spiritual or heart values, but not at all in a monastic setting. I read the book after hearing about it from my dental hygienist and then seeing the author interviewed, once by Amy Goodman and once by John Stewart and someone in between, I forget who. Suskind has done his watchman's duty as per Ezekial. He's off the hook. Now, how about we get on with some fearless impeachments.

Published by Thriftbooks.com User , 13 years ago
When you finish this book you'll really want impeachment, but it's probably too late. Perhaps the world will call for a war tribunal of our boys at the top. My hope is that the military families will finally wake up to their betrayal. We have all learned that the White House starts a character assination when they can't defend their handywork. It has already begun for Suskind who is no hawk. As a pulitizer prize winning journalist he knew to get the interviews in the book on tape. I doubt that Suskind is going to get rattled at the garbage from the Washington thug group, but the guys that gave the interviews will probably be strong-armed into denial to save their jobs even though its all on tape. The White House always assumes we are all as dumb as dirt and will believe all their fiction regardless of facts in books. GREAT read that will probably be trashed by our wonderful so-called media with the propaganda talking point handed to them. Isn't it still illegal for the government to have a political propaganda machine? Read this book. Pass it on. Read, read, read, and watch PBS. How did we get into this mess? Oh yeah, with the help of Money, the corporate owned Media, and the great political war plan to reduce GOOD government to the size of a baby so that could be drowned.

Published by Thriftbooks.com User , 13 years ago
What amazes me about all of these tell-all books about the Bush white house is the fact that Bush demands, and seems to have gotten to a large degree, a good deal of loyalty. But in this new book, it seems everyone (or many) are anxious to talk. It's interesting that the author tells much of the story in the present tense. Curious indeed. Ron Suskind writes in this book that the White House ordered the CIA to forge a back dated, handwritten letter from the head of Iraqi intelligence to Saddam Hussein. The White House denies all of this. Of course, one can expect this. But I find the book not well documented. So I had to question some of the assertions. The author also claims that the Bush administration had information from a top Iraqi intelligence official "that there were no weapons of mass destruction in Iraq - intelligence they received in plenty of time to stop an invasion." This indeed is old news. The author goes on to say, "The White House had concocted a fake letter from Habbush to Saddam, backdated to July 1, 2001." He continues, "It said that 9/11 ringleader Mohammad Atta had actually trained for his mission in Iraq - thus showing, finally, that there was an operational link between Saddam and al Qaeda, something the Vice President's Office had been pressing CIA to prove since 9/11 as a justification to invade Iraq. There is no link." This is a very fascinating book. While the author has been accused of being a "gutter journalist", one wonders if there is truth to this. On the other hand, I didn't feel the author really proved his case. And the book seemed fragmented and not well constructed. Certainly not up to his standards. Suskind writes that the forgery "operation created by the White House and passed to the CIA seems inconsistent with" a statute saying the CIA may not conduct covert operations "intended to influence United States political processes, public opinion, policies or media." One wonders whose opinion this is. We want facts. From 1993 to 2000, Mr. Suskind was the senior national affairs writer for the Wall Street Journal. He won the Pulitzer Prize for Feature Writing in 1995. This book, with all of it's questionable tactics is still a good chronicle of the Bush administration. Therefore, it's an important work --- regardless of where the reader stands politically. Highly recommended. - Susanna K. Hutcheson
Trustpilot
Copyright © 2022 Thriftbooks.com Terms of Use | Privacy Policy | Do Not Sell My Personal Information | Accessibility Statement
ThriftBooks® and the ThriftBooks® logo are registered trademarks of Thrift Books Global, LLC