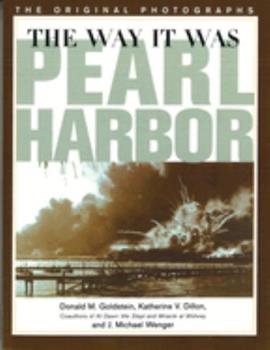 Way It Was: Pearl Harbor: The Original Photographs

"At long last, the familiar and overused photographs of the "Day of Infamy" can be retired. The 430 prints in this new and welcome collection were gathered from various Japanese and U.S. sources, and most have never been seen by the general public. The majority were taken during the height of the air raid itself, many from Japanese cockpits. Along with numerous maps and sketches, they are arranged according to the various phases of the battle and...

Shouldn't be your first book on the attack, but...

Published by Thriftbooks.com User , 14 years ago
If you have gleaned all the knowledge possible from the multitude of first person and general overviews published, this book will give you a concise knowledge of the tactics and timeline of the events. It contains a wealth of photographs that you will not see anywhere else, and each one of them is pinpointed to the minute when it was taken. You will see the first bomb hit the floating drydock, you will see the California disappear into a sea of burning oil, and you will see period photographs of the men involved (on both sides), what they did, and where and when they died doing it. True, some of the photographs are dark and lack contrast in the details, but hey, if you don't know what the Oglala or Nevada looks like up close, then you are not ready for this book. Another nice feature is that you rarely have to turn the page to study a photo as it is referenced in the text. It would have been nice to have this book printed on glossy pagestock, but I believe the publishers suspected it would not have a wide audience. Nonetheless, it is an invaluable reference for the serious student of the Day of Infamy.

If You Read Only 2 Books On Pearl Harbor, This Has to Be One

Published by Thriftbooks.com User , 20 years ago
I just finished "At Dawn We Slept" and was very impressed with it. I then saw the movie "Pearl Harbor". On a coffee stop at the bookstore, I saw this book, and bought it on the good impression of a similar volume about D-Day by the same editors. The coffee was just OK, but the book is tremendous.This book, as did the D-Day issue (see my review if you're interested), presents original photos tied together with a fairly simple narrative that tells the story of the Pearl Harbor attack. You'll get to see photos of all the major players, Kimmel, Short, Yamamoto, et al. Some of the attack photos are pretty amazing. The original Japanese photos are stunning and good for hardware fans. The Japanese ariel photos lend great detail to the story. The superimposed flight patterns are very instructive. As I implied above, after Prange's book and the movie, this book was the crowning glory to my Pearl Harbor reading.This book will catch you off-guard. At first it looks very simple, which it is, almost for children, but when you dive into it, it gets surprisingly detailed. All the US planes that were involved are present in photographs, even a B-18! The text presents facts and occurances, and no politics. 90% of the ship photos are spectacular.So, go out and buy this book. You really should have it, then read one of the many books about Pearl Harbor. The photos will make the story live. Well done Mr. Goldstein and Ms Dillon.
Copyright © 2020 Thriftbooks.com Terms of Use | Privacy Policy | Do Not Sell My Personal Information | Accessibility Statement
ThriftBooks® and the ThriftBooks® logo are registered trademarks of Thrift Books Global, LLC