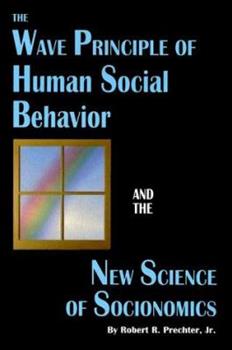 Despite its groundbreaking subject matter, Introduction to the Wave Principle is designed to appeal to a wide audience. Social scientists will understand the importance of the Wave Principle. Investors will want to add it to their tool kit. Business professionals will find it useful in anticipating business cycles, which are based on mass psychology. An excellent resource for professors and students wishing to explore the connection between social...

The Patterns of Group Behaviour

Published by Thriftbooks.com User , 13 years ago
A fascinating look at how groups of individuals act in demonstrable, reproducible patterns, similar to the genesis and movement of hurricanes, plants and other fractal based systems. Apparently 'random' phenomena such as stock market runs appear to be commanded by an 'invisible hand' that waves in repeated fashion. If the Elliot Wave Principle interests you, this book will be an exciting read.

Taking Stock of the New Science of Socionomics

Published by Thriftbooks.com User , 17 years ago
About twenty years ago, I was sitting in the office of a blue blood firm on Wall Street. The elderly partner closed the door, opened his desk drawer and asked: "Do you know about this?" I expected that the book he was handing me was either erotica or esoterica. It was the Elliott Wave Principle by A.J. Frost and Bob Prechter. Yes, I had heard of it, but not everyone had. Now, aspects of it are available on almost every investor's computer. It has become something of a universal language. But, one can order coffee in different cultures and in different cafes, but be served very different qualities of coffee. It depends on the Barista! Elliott wave may be known, but it may not be cognized. It is invariably associated with Bob Prechter. But he has always acknowledged that he was developing other people's ideas. Prechter has been famously known as being a fabulous bull and infamously regarded as a dire bear. Elliott wave is burdened with the Taboo of being "Technical." Many barbs against Technicals are conveniently anchored against Elliott. Elliott was, in part, developing the preliminary theory of Charles Dow whose eponymous average we wrestle with every day. Whether or not the majority recognizes the Elliott wave paradigm, there are patterns in markets which cryptozoic market speculators use every day. Bob Prechter's new book, The Wave Principle of Human Social Behavior, subtitled the New Science of Socionomic(www.elliottwave.com/socionomics), may represent his defining contribution to finance. It includes Elliott Wave but delves much further into the frontiers of finance. Investor psychology (the "Psychologicals," as I call them) are subsumed under the larger scale of Sociology (the "Sociologicals?") His book provides new material on Herding and Mood which are the pith of Behavioral Finance. Perhaps most compelling are his insights into popular culture. His analysis of how art, music, sports and political trends relate to the market is unique. The book includes photographs of historical events which show the synchronicity of markets and financial culture. This is related to what I call "Pagegrading" in my book, Behavioral Trading. Front page photographs are a powerful limbic rendering of the Zeitgeist. The Socionomically inclined can read markets from the Social Mood and vice versa. He demonstrates that "Social Mood" is patterned and has a reflexive predictability with the market. The difficulty many people have with Elliott is their apprehension that they have to learn all of the details. But, much can be gleaned from a more generic appreciation. When we go to a Japanese restaurant, we don't expect to learn how to make sushi. We could probably learn exactly how to do it, but only with great passion and practice. Why not just drink the sake and begin to think a little bit Socionomically? The difficulty with Philosophy is that it is always relational and hierarchical. A market philosophy provides a framework for thinking which may not always deliv

Spooky feeling of a breakthrough into the unknown

Published by Thriftbooks.com User , 21 years ago
Imagine you were one of the first people to look through a telescope - and you suddenly found out that the sky was not merely wallpaper. You would have known that the discovery was a breakthrough, but what would happen would be spooky to think about.That's how I feel reading Prechter's book about the new science of Socionomics. The telescope made sense of the jumble of lights in the night sky, as well as strange events like eclipses. The new science of Socionomics makes sense of a huge jumble of information in financial markets as well as strange events like crashes, manias, fads and fashions. The personality of markets and societies is linked directly to how our brains respond to certain types of input.It is also a book that stirs up the back of your mind - are we really as independant in thinking as we imagine ourselves to be: how strongly are we influenced by the society around us? The book shows frightening evidence that our brains are hard wired to respond immediately to impulses stimulated by the human herd.Overall, the book is like reading about the first observations from telescopes - it is a spooky glimpse into a world right in front of our faces that we've not understood until now. If you read it thoughtfully, the book will be both unsettling and inspiring in its implications.

Flat Earthers vs: Round Earthers

Published by Thriftbooks.com User , 21 years ago
If you use Elliott Wave in your investment analysis you know it works. If you try to point this out to a non-waver you feel like the round earth advocates must have felt 500 years ago defending their position to the flat earthers. After all it does look flat; and stock charts do just look like a bunch of squiggly lines. After reading this book you begin to understand the science that is at work in Elliott Wave Theory, and believe me, they are not just a bunch of squiggles. Mr. Prechter makes his case brilliantly.

Published by Thriftbooks.com User , 21 years ago
As someone who is extremely interested in how the brain works and why we 'do what we do', as "rational" human beings, I found this book to be extremely compelling. I simply could not put it down. Prechter takes a huge compilation of material (from neuroscience, psychology, fractal anaylsis to technical stock market analysis) and boils it down into a beautifully written and fascinating look at how our mind and society is shaped and guided by an underlying mathematical pattern that is the foundation for all living systems. We are lead by Prechter through a basic understanding of Ralph N. Elliott's Wave Principle - a technical method of stock market analysis Elliott discovered during the 1930's - and come to find that this pattern is fractal based, and not only indicates where the NASDAQ is going to go tomorrow, but shows us where we will go as a society!This book is a must read for anyone studying brain function, psychology, or philosophy AND for the beginning and seasoned trader! I wish I had found this type of information years ago.
Copyright © 2020 Thriftbooks.com Terms of Use | Privacy Policy | Do Not Sell My Personal Information | Accessibility Statement
ThriftBooks® and the ThriftBooks® logo are registered trademarks of Thrift Books Global, LLC