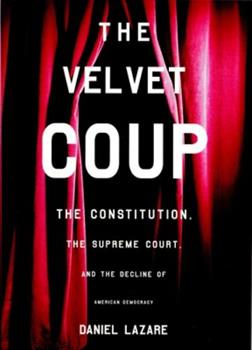 The Velvet Coup: The Constitution, the Supreme Court, and the Decline of American Democracy

According to the media, the 2000 election debacle was a once-in-a-century fluke. But, in this riveting new polemic, political analyst Daniel Lazare argues that such events are increasingly likely to become the rule rather than the exception. After more than two hundred years, America's antiquated government is in a state of chronic breakdown. A constitutional overhaul is urgently needed to update the machinery in line with the needs of modern democracy...

Published by Thriftbooks.com User , 15 years ago
I hestitated on giving this a five-star due to: A. Its short size and relative lack of depth, and B. The fact that Lazare tackles not just our court system, but so much more, in his magnum opus, "The Frozen Republic." (See my review of it for more information about that book.) That said, despite the slim size, Lazare has a good starting ground here. To me, the most valuable portion of the book is NOT his examination of the modern federal judiciary, but his look at the British "Country" school of political philosophy, the driving force behind French political essayist Montesquieu, and hence, behind our Founding Fathers at Philadelphia. Grounding the Country movement in British governmental and constitutional history, Lazare points out the irony (or worse) that the movement's influence was fading, and fairly rapidly, in the Home Isles exactly at the time of the Colonies' drive for independence, and how their understanding, and misunderstanding, of Crown and Parliament was governed by Country political philosophy. In short, Lazare argues, our Consitution was on the edge of being archaic when it was written. Lazare then asks how you can make something "more perfect"? If not, is the Preamble just political boilerplate? Perhaps. But, for 220 years, American political leaders have largely bought into the idea that whatever is wrong w/America, the solution is inside the Constitution. Besides pointing out its obvious failings, such as the 3/5 clause on slavery, Lazare notes that the Constitution has never ruled on secession, which was contemplated by both North and South before 1861. Yes, that question was answered in one way by Union force of arms, but, even after, it was never constitutionally forbidden by amendment -- no clarification was given to previous, differing constitutional interpretations. Lazare points out other turning points in American history where opportunities to truly overhaul the constitution were ignored. I changed my original four-star rating at this point and bumped it. Anyway, if you do NOT believe in "American exceptionalism," and likely if you *intelligently* place yourself outside the two-party political mainstream, whether as Green, Libertarian, or unpartied Social Democrat, read this book; it's for you. Then, go read "The Frozen Republic."

Published by Thriftbooks.com User , 18 years ago
I highly recommend this book. The author takes a hard look at the U.S. Constitution, the intentions of the U.S. founding fathers, and the realities of contemporary society-- and makes a plea for election reform.This is not an easy book to read, especially the earliest chapters. At times I wondered what the author was driving at, but by the end of the book I was persuaded that the author's careful presentation of a historical background and the sources of his logic were key to understanding his ideas.If you are interested in democracy and election reform you must read this book.

Published by Thriftbooks.com User , 18 years ago
I had read the author's The Frozen Constitution, but had no idea he had adddressed the 2000 election issue in another book. I came across this inadvertantly. Although the author's view of the constitution will raise hackles on some, his view is well-informed and definitely worth study if for no other reason than that it flushes out some stubborn factual history that doesn't play in the same key as the usual Yankee Doodle. It can be unnerving to confront the _actual_ history of the highest court in the nineteenth century and up to the time of FDR. It is hard to make the case the Supreme Court had a serious connection to the arbitration of justice. The author's idiosyncratic view gives you a run for your money on the actual mechanics of the American system, and it is important to remember that the current regime would like nothing more than to restore the kind of court system that reigned throughout America history. The current crop of bedtime bonzos at court that stole the election in 2000 is an appetizer for the future, if that's what you are going to vote for.

Published by Thriftbooks.com User , 19 years ago
When I first picked up this book I thought it was another book on the events of the 2000 election. Once I started reading it, I couldn't put it down--a fascinating read. It starts with the events of the 2000 election and goes on to show how these were just symptoms of a more pervasive problem--of the Constitution repeatedly frustrating the public will and perverting the democratic process. You won't look at the Constitution or the Senate in the same light again.
Trustpilot
Copyright © 2022 Thriftbooks.com Terms of Use | Privacy Policy | Do Not Sell My Personal Information | Accessibility Statement
ThriftBooks® and the ThriftBooks® logo are registered trademarks of Thrift Books Global, LLC