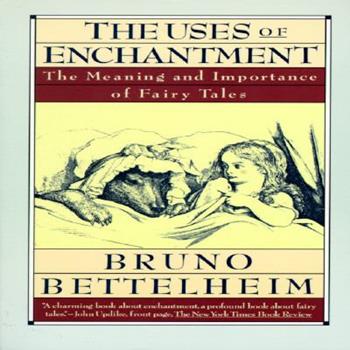 The Uses of Enchantment: The Meaning and Importance of Fairy Tales

A famous child psychologist explains how fairy tales educate, support, and liberate the emotions of children.

Published by Thriftbooks.com User , 16 years ago
It is well known that storytelling is an innate expression of civilization, in an effort to define who we are and to make sense of the world. The fairy tale is an important part of this tradition that has a long and rich history spanning thousands of years. First published in 1975, Bruno Bettleheim, one of Sigmund Freud's followers and an important contributor to psychoanalysis, has written an incredible book, suggesting that the fairy tale has a pedagogical use, educating the child about the struggles in life, that these struggles are an intrinsic aspect of existence. Following Plato, he believes that the literary education of children should begin with the telling of myths. In other words, the fairy tale can present models for behaviour, providing meaning and value to our lives. This wonderful book expresses this view extremely well and also provides a frame of reference towards the child's overall psychological development. I have read Freud for some years, and nowhere, including Freud himself, have I read a more succinctly expressed view on the ultimate purpose of psychoanalysis, than in this book by Dr. Bettleheim, he writes, "Psychoanalysis was created to enable man to accept the problematic nature of life without being defeated by it, or giving in to escapism. Freud's prescription is that only by struggling courageously against what seems like unwieldy odds can man succeed in wringing meaning out of existence." (P.8) Fairy tales inform us about life's struggles, hardships and the reality of death. From Bettleheim's point of view, the fairy tale is a "manifold form" that communicates to the child, educates them, against life's vagaries and realities, which are the unavoidable aspects of our existence. More specifically, the fairy tale is an educational tool to help children grow and develop into adults. He goes on to say that the child needs to be given "...suggestions in symbolic form about how he may deal with these issues and grow safely into maturity." (P.9) Bettleheim adeptly sets out to prove his theses by analysing well known fairy tales in the context of psychoanalytic theory, persuasively arguing the value of these tales towards the child's psychological development. If you are interested in psychoanalysis and would like to know more about the profound positive effects the telling of fairy tales can have on our young, this incredible book is indispensable.

A warm and fascinating book for anyone interested in stories

Published by Thriftbooks.com User , 20 years ago
For those who love the written word (and that would be anyone browsing here, I suspect), we all have the desire to infect others with our same literary enthusiasm. And study after study has shown that reading to children is best way to ensure children's success in school. So the question is not DO we read to children, but HOW and WHAT do we read to children. The answer provided in this book is, I feel, the best. As parents and caretakers we have a natural and healthy instinct to protect children from harm. But if we think back to our own childhoods, we will find them inhabited by all sorts of irrational fears. And if we are realistic, we will admit that these cannot be entirely prevented. Nor, perhaps, ought they to be. Bettleheim argues that the perils and deliverance from those childhood perils are suggested in fairy tales, though only indirectly. And it is their indirectness that makes them uniquely useful, because children are not always able to consciously understand and articulate their conflicts. And it is this very unspokenness, unrealized nature of the conflicts that makes them easier to grapple with. This should give pause to any who seek to sanitize children's mythos from ALL depictions of violence. Children's thoughts are full of violence, no matter how idyllic one tries to make the child's circumstances. What we need to teach children is not that violence does not exist, but how to deal with both psychic and physical violence. And while fairy tales ARE violent, the violence is vengeful or retributive, but never senseless. Evil is punished and good wins out. And, as Bettleheim observes, adults are always punished for their rash resorts to violence and ill will, but children are always given opportunities to atone and restore. Even if (as the reader from or-id asserts) childhood as a unique stage of development was denied in Mideival times, that does not mean that childhood was "invented" by Victorians. These are the same sorts of people who insist that romantic love was invented by French Troubaours. That is absurd and easily refuted by even a cursory review of ancient texts. We see romantic love as far back as we have written texts (see the Epic of Gilgamesh, for plenty of romantic love, some of which is illegal in some states). And for those who doubt that the ancient world was ignorant of the notion of childhood, I refer you to I Corinthians 13:11. Paul, at least, understood that children thought and behaved differently from adults, and I doubt that (inspired though he may have been) he was the only one to have figured it out. Psychoanalysis has been mostly discredited in the psychological profession, but I think it has some value still. Whether Bettleheim's meanings seem obvious (red a symbol of loss of sexual innocence) or far-fetched (frogs representing sexual fulfillment), they are always thought-provoking. Even if you reject the suppositions of psychoanalysis, or have serious qualms about Bettleheim's career, I still maintain

Forget What The Naysayers Tell You!

Published by Thriftbooks.com User , 20 years ago
Bruno Bettelheim's book is excellent in looking at the psychology behind fairy tales. I think what most modern readers forget is that the Fairy Tales were moral tales, and that we cannot really look at them with modern eyes. In the earlier eras, Children were viewed as "miniature adults" that had to be shown the ropes of what was considered the modes of good and acceptable behavior in society. I read this book after the release of the film "The Company of Wolves" which took Little Red Riding Hood and put it into a tale of adolecence and budding sensuality against what is considered staying on the straight and narrow path. The effect was pure Bettelhiem. I would definitely recommend this book to give a new perspective on fairy tales and their importance in the collective consciousness of our world.

An insigtfull rendering of the value of fairy tales!

Published by Thriftbooks.com User , 23 years ago
Got kids? Want them to grow up to be as emotionally, intellectually and spititually developed as possible? Then tell them fairy tales! The world famous child phychologist Bruno Bettelheim belives that the telling of fairy tales in thier original form can be the single most powerful influence in the lives of children. After reading his book on the subject: "The Uses Of Enchantment" you would (as I have) come to percieve the value of this medium for the channeling of essential information about how to live sucessfully in society. When Einstein was asked by a concerned mother what she could do to best promote her children's intellectual development he responded: "Tell them fairy tales!" When she pressed him for what else she could do he said: "Tell them more fairy tales!" Fairy tales reach the young child on the 'enchanted' level which is his world and give acceptance and approval to the chaotic and uncontrolable emotional states which rule him. They involve him in the delemas of the 'hero' and entice him to believe that the problems that presently so overwhelm him will ultimately be resolved if he will stick steadfastly to the true path. This body of liturature was has it's roots in prehistory and has been shaped with the particular aim of the socialization of the young: for which reason it must be passed on in it's original form. Any application of this insight will ultimatley result in happier, more productive and more thoroughly adjusted and socialized sons and daughters. More importantly though, right from the moment it begins it confers a compelling and involving validation of the child that exists at it's center. A fairy tale told in it's original form is: "a love gift to a child"!

Published by Thriftbooks.com User , 23 years ago
Bruno Bettelheim makes a very good case for the importance of reading fairy tales to children. He proposes that by hearing about life-threatening problems, serious problems, children are given vital information for the planning of their lives and the formation of their personalities. By hearing of success against great odds, children are given hope that they, too, as powerless as they may feel themselves (as children), can one day hope to "live happily ever after."This is in sharp contrast to programming such as "Barney" which presents an unreal fairy-tale present. While children may enjoy seeing programs where there is no violence, they nevertheless DO need to have the reassurance that the difficulties they experience in daily living are universal, and that by perseverance they can develop into good strong, kind people.The author defines a fairy story as one in which there is a happy ending. Exceptions are (notably) "The Steadfast Tin Soldier" and "The Little Match Girl". I took a renewed interest in reading these tales to my youngsters, and found that indeed they did appear to be most receptive to them. And no longer did rather gory details disturb me, as the children DO seem to realize that 1) it is just a story, and 2) there is in fact some reasonableness to the idea of unhappy people in this suffering world.I recommend this book very highly, indeed, to parents of young children. But Dr. Bettelheim cautions against telling the children how good the stories are for them, lest the full impact be somewhat dissipated.
Copyright © 2020 Thriftbooks.com Terms of Use | Privacy Policy | Do Not Sell My Personal Information | Accessibility Statement
ThriftBooks® and the ThriftBooks® logo are registered trademarks of Thrift Books Global, LLC