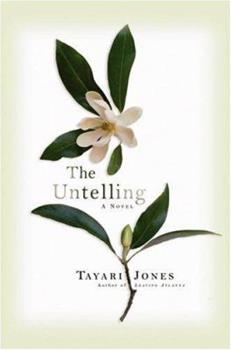 After dealing with the loss of her father and sister fifteen years ago, twenty-five-year-old Aria attempts to reinvent herself through marriage and beginning a family of her own, only to find that she must deal with the past before she can look to the future.

Published by Thriftbooks.com User , 15 years ago
The prologue of this deeply affecting novel took my breath away. There is a quiet brilliance throughout this story of loyalty, of trust, of shame. Tayari Jones writes with such humanity, with insight, with intelligence, and yet this is a writer who isn't trying to impress, but rather to remain true to her characters and their struggles. Somehow, too, Jones is able to bring a kind of humour to even the most dire of circumstances (not an easy trick) and I particularly enjoyed Aria's mother's intermittent declarations. A wonderful novel.

Published by Thriftbooks.com User , 16 years ago
Our lives are the sum of what we do and what has been done to us. It is the aggregate record of these actions that build our character, our memories, and others' memories of us. And how often do we wish our doings and others' could be undone? And isn't it this hope that keeps us, so often, silent about the wrong turns that make us who we are? The Untelling, a haunting and at just the right times humorous second novel by Tayari Jones (author of the simultaneously celebratory and mournful Leaving Atlanta), sets as its central tension a tremendous fib. Or is what's at the core of the trouble recorded here a terrible accident? Or sweet but worrying love? Or a floundering mother? Or the lopsided affections of friendship and sisterhood? Or a neighborhood tottering between squalor, hominess, and detached gentrification? Or...,or..., or.... One of the many things Jones does well in this novel is route us through the tangled courses that are the complicated reality of a fully lived life. To reduce the root of the main character's trouble to the catastrophe of her youth or to the catastrophe that grips her body and her relationship in the time in which the novel is set would be too easy. And Jones has no intention of letting anybody off the hook. Jones' exacting and expansive vision makes her characters so real that I find myself, while locking my bedroom door, for instance, or while watching people carving pumpkins, thinking of something that once happened to someone I knew. On both the large and small scale, the book's details are so vivid and ring so true that often I find myself thinking this way. "Who did that happen to?" I ask myself. "Where did I meet her? Where does she live?" Oh yes, that's right. She lives in The Untelling.

To tell or not to tell

Published by Thriftbooks.com User , 16 years ago
What happens when we keep secrets from our family and friends? This is the question that is explored in The Untelling by Tayari Jones. Aria Jackson's life was dramatically changed after the tragic car accident which killed her father and baby sister. After the accident, Aria and her older sister, Hermione struggled to stay afloat in the same house with their mother who was an emotional wreck. Now on her own, Aria has carved out a comfortable life for herself working at a literacy center, sharing a house with her best friend, and a relationship with a reliable man who she loves, Dwayne. Just when things seem to be going smoothly, Aria receives some devastating news. Should she keep this information to herself or tell the secret that could push away the person that she loves? The Untelling deals with many different relationship issues between family, friends and lovers. Just like in Leaving Atlanta, Jones has a knack for creating main characters to whom I can relate even when we do not share the same experiences. Aria's "secret" is a topic that is not typically discussed in African American communities. Through my book club's discussion, I was shocked to learn that it is more prevalent than I thought. This novel also addresses the issues of the gentrification of neighborhoods across the United States. In making the areas nicer, the long time residents were forced to find somewhere else to live. This novel is an excellent selection for book clubs because of the many issues, family and community it deals with. I know I personally was enlightened by the discussions my book club had regarding this book. I look forward to the next release by Jones. Reviewed by Nicole APOOO BookClub

Published by Thriftbooks.com User , 16 years ago
I loved this book, even though I wasn't all that crazy about the characters. The story's plot and themes were highly original, and I found that and the level of writing to be a welcome break from some of the usual run-of-the-mill relationship drama books by a lot of other black writers. It was not only a great story, but it actually made me think. Even though I wasn't that fond of Aria, I could amost identify with her, because I've made bad decisions in my twenties just like she did. I can almost see Aria ten years after the novel, thinking "Why didn't I handle that situation differently??" I really enjoyed the way Tayari Jones not only used the city of Atlanta as the backdrop for this novel, but made it almost seem as if the city of Atlanta was an extra character in the book. I'm a native Atlantan, and in this respect, the author did not miss a beat. If you like highly literary authors like Pearle Cleage or J. California Cooper, check out this book. Tayari Jones' work is definitely on that level.

A moving and unforgettable tale

Published by Thriftbooks.com User , 16 years ago
Tayari Jones's first novel, LEAVING ATLANTA, was a sensitive tale of children growing up during the Atlanta child murders, told from their perspective. The children of her second novel THE UNTELLING, also set in Atlanta, are all grown up and living with the scars of childhood. This time the story is told from the viewpoint of Ariadne Jackson, who likes to be called Aria, a woman in her twenties whose life was shaped by the death of her father and infant sister when she was a young girl. The deaths changed the surviving members of the family, Aria, her mother and her sister Hermione. After the accident, Aria and Hermione's mother becomes a cruel and unpredictable parent whose irrational behavior forces Hermione out of their lives. Both women have strained relationships with her as adults. At the beginning of the novel Aria realizes she is pregnant and decides the unexpected child is good news. She is nauseous but hopeful that once she tells her boyfriend he will become her fiancé and they'll marry. Yet she makes the mistake of sharing her good news with someone else first. When she does tell Dwayne, he is true to her vision of him and proposes. Though Aria is sad she won't have the kind of elaborate, non-pregnancy-induced wedding that her roommate Rochelle is planning, she is happy with Dwayne. Then terrible news changes everything for her and, though he doesn't know it, Dwayne. Aria decides to withhold the devastating information from Dwayne and desperately works to keep up the lie. As she tries to salvage their future with lies, she tears down any hope of their happiness. The strength of Tayari Jones's writing is that she can tell this story, a much simpler one than LEAVING ATLANTA, in such a compelling way. She captures the nuances of emotion that Aria experiences along the path to her personal tragedy and her self-inflicted descent into heartbreak. Along the way Jones allows the girl Aria to surface and show how deeply the accident that took her father and sister scarred the mother and surviving sisters. It is a hard story to forget. And that's as it should be. --- Reviewed by Bernadette Adams Davis
Copyright © 2020 Thriftbooks.com Terms of Use | Privacy Policy | Do Not Sell My Personal Information | Accessibility Statement
ThriftBooks® and the ThriftBooks® logo are registered trademarks of Thrift Books Global, LLC