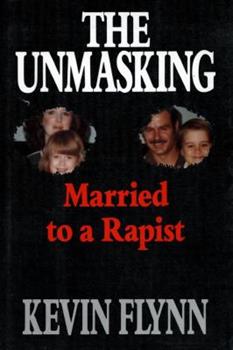 The UNMASKING MARRIED TO A RAPIST

by Unknown and Michael Flynn

Flynn recounts the story of Eddie Wyatt, an apparently average, happily-married man from Texas, who was responsible for a series of violent rapes. Flynn examines the effect of the revelations about Eddie on his wife Ronda and their children, and asks how it was possible for her to live with him for seven years without having the slightest inkling of sexually violent and criminal behaviour. The book goes on to examine some aspects of Wyatt's background...

Published by Thriftbooks.com User , 13 years ago
In THE RAPIST, Kevin Flynn has produced an intelligent and professionally written account of the marriage of Eddie and Ronda Wyatt. Eddie, a criminally delinquent teenager from Galveston, TX, who became "saved" while in prison, married Ronda after meeting her at a Christian outreach center in Dallas. Though he apparently tried hard to quell his demons, Eddie eventually resumed his lifelong profession of burglary, adding a more mature touch by including rape in his repertoire. Ronda, a Godly, naive, and insecure individual, was unaware of Eddie's criminal behavior and felt guiltily responsible for the obvious downturn in their marriage. I will not write more about the plot so as not to spoil the story for any potential readers. Kevin Flynn has done a good job here. The book flows well and is an easy and compelling read. The backgrounds of both Wyatts are well researched, and the primary sources of Flynn's material are interviews with Eddie and, especially, Ronda. Flynn makes extensive use of material quoted from Ronda's journals as a sort of touchstone for the narrative, and it is only here that I have any criticism of THE UNMASKING. While I have no problem with the device itself, Ronda's journal entries are, to me as a reader, all virtually the same, and they quickly become boring since basically all Ronda does is bemoan her feelings of failure as a wife and ask for God's help in becoming a better person. I don't wish to diminish the horrible trauma Ronda Wyatt suffered upon learning that she had been deceived for seven years by her rapist husband, but I found her, as presented in the book, to be a kind but not especially interesting person. Nonetheless, THE UNMASKING is quality true crime, and fans of the genre should like it.

The Unmasking: Married to a Rapist

Published by Thriftbooks.com User , 14 years ago
I haven't always looked at this story as a five star story - especially since the drama is my own. Now, 25 years after the fact, I can say that this experience - while utterly horrible and disruptive of our lives - has made me into the woman I am today. For that I am thankful. In August of 2007 Eddie is still in prison. Diana is married, a wonderful mom, and working on her masters degree in counseling. Paul is unmarried and busy with his life. Both have had to face their past and it has not been an easy task. Both Paul and Diana are still the loves of my life. The Unmasking is "our" story. I don't regret the sharing of it - though it was very painful. You need to know, we made it! There has been life after the nightmare. God is still good. Ronda (Wyatt) Knuth

Published by Thriftbooks.com User , 15 years ago
This was a good book with alot of detail,it also goes back into his childhood which tells you alot about his behavior.I could pick this book up again and read it in a couple of years and still get into it.Is what I really like about it is that alot of it comes from his own mouth and he is very honest with his feelings.The writeing is really good and don't run on and on saying the same thing over and over but a different way.I almost wish that this guy could of found a cure for his behavior,he seemed to be sorry for what he did and you could tell felt bad about his actions.Although he's not to be trusted on the pages it just drawls you into how bad he really feels.
Trustpilot
Copyright © 2022 Thriftbooks.com Terms of Use | Privacy Policy | Do Not Sell My Personal Information | Accessibility Statement
ThriftBooks® and the ThriftBooks® logo are registered trademarks of Thrift Books Global, LLC