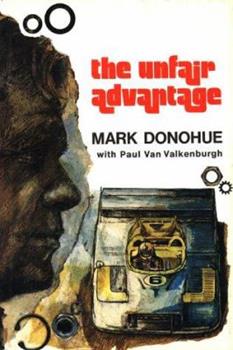 In 1974, Mark Donohue took a year off from driving at the height of his racing career to write "The Unfair Advantage," a candid and revealing book about his journey through the world of auto racing -- from amateur SCCA races in his own '57 Corvette to winning the Indy 500 in Roger Penske's McLaren M16. This new edition contains over 60 additional photographs and comments from people who worked and raced with Donohue during the 1960s and early 1970s...

Published by Thriftbooks.com User , 17 years ago
There are very few motorsports books extant that can be called true classics or world-changers. This is one of them, and it's one of the best on top of that. Mark Donahue was an extrordinary individual, not only a blindingly fast driver, but also a talented, disciplined, and most importantly, curious engineer. To have the virtues of both top-level driver and top-level engineer embodied in the same person is a very rare combination. To have been present - indeed, to be one of the driving forces behind - a revolution within a sport and an industry is even rarer. To have this person write about his experiences while busy changing the world is precious beyond price. To put it simply, you cannot be a student of the profession of motor racing without reading this book. I offer this as evidence: while I am by no means an autograph hound, I do, from time to time, have occasion to encounter people within the motorsports family whom I admire enough to want to collect an autograph from. I use my copy of The Unfair Advantage as my autograph storage device. Putting this book in front of people like Jackie Stewart, Carroll Shelby, and Carroll Smith results in a shock of recognition, followed by praise for the author. What greater endorsement could you want?

The Unfair Advantage of Intelligence

Published by Thriftbooks.com User , 18 years ago
This is a book I waited to be reprinted for a long time. Mark's honesty about his weaknesses and fears is a sign of his strength and desire to be the best. I admired him for his accomplishments and even more for his drive after reading this book. He helped make Roger Penske the racing legend he is. Will we ever see a man like Mark again? I doubt it!

No auto library is complete without The Unfair Advantage

Published by Thriftbooks.com User , 20 years ago
I remember being in college in the '70's and seeing ads in Road & Track for this book. It sold back then for about $12.00 (first editions, no less!) Unfortunately, a full tank of gas in those days was $2.75 and a bag of White Castle hamburgers was less than $2.00, so the book was out of reach. And then it went out of print, became a classic and got further out of reach. About 8 years ago, I found a copy in our local library and finally got a chance to read it - which I did in one sitting. It was like having Mark Donahue sitting next to you spinning some yarns, telling tall tales and explaining "what it's like out there." I met Mark's son, David, a few years after that at a Porsche club meeting and asked if he had a copy of the book to sell! He told me he didn't even have one for himself. He did say that there was talk of doing a reprint and lucky for us, it has happened. If you want to relive one of the most exciting periods in racing (with remarkable insights into the growth of the Roger Penske juggernaught), by all means get yourself a copy of this book. I just received the soft cover version and it's a keeper. Another wonderful racing book is Sterling Moss's - "All But My Life."

Great Read - Worth the Expense

Published by Thriftbooks.com User , 21 years ago
In many ways I sought after and bought this book because of its collector value and mistique. I was very surprised, however, to find that it is well written and quite and interesting read. The book is organized around the various cars that Donahue raced throughout his career, until his first (and unfortunately not permanent) retirement. He discussed the people involved in each of the cars, the challenges faced, mistakes made, and unfair advantages gained through innovation, preparation, and discovery. He is surprisingly candid about his own failings and feelings, but it is strictly professional. There are really only a handful of sentences that speak about his private life.If you are interested in American racing throughout the 60's and early 70's this is a fascinating book. Donahue comes accross as insightful, humble, and at times insecure. It is a remarkable contrast to the overwhelming ego presented in books like FASTER! by Jackie Stewart. It's not an easy book to find, nor inexpensive, but if you are interested in the genre it is well worth the trouble and expense.

A MUST for a racer or race fan!

Published by Thriftbooks.com User , 22 years ago
Mark Donohue was the thinking mans racer. He not only knew how to make a "plain Jane" into a race car but he knew WHY his steps worked. He had no need to worry about racing being a "black art"...He was an engineer who applied his knowledge to his racing projects and had fun while he was doing it. His book could be used for a "basic training" manual for a "racer-in-training". His untimely death "short-chainged" the racing world. If we were still graced with his presence, he would SHURELY have changed (for the better) the landscape of racing as we find it today. He is sorely missed but at least his memory and his book can teach us a few things about this "black art".
Copyright © 2020 Thriftbooks.com Terms of Use | Privacy Policy | Do Not Sell My Personal Information | Accessibility Statement
ThriftBooks® and the ThriftBooks® logo are registered trademarks of Thrift Books Global, LLC