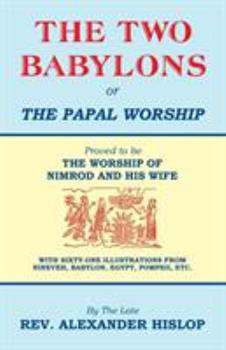 The Two Babylons, Or the Papal Worship

Is Modern Babylon (Rev. 17:5) the Roman Catholic Church? Where did their practices, traditions and beliefs come from? In this scholarly classic, first published as a pamphlet in 1853 then greatly expanded in 1858, the late Alexander Hislop (1806-1865) reveals how most of the Christian rituals and trappings did not originate with Christ or the Bible, but were adopted from ancient pagan Babylonian religion, and given Christian names. Learn how Nimrod...

Exposing the myths and deception.

Published by Thriftbooks.com User , 4 years ago
A must read for EVERY Catholic. This book proves the catholic church is no good. I am not saying that there are not good people who are Catholics but the Catholic church itself is pagan in its origin. There is no need to be Catholic whatsoever. All we need is Jesus Christ. The pagan roots of its doctrines are exposed by this fantastic book!

A History of Traditions.

Published by Thriftbooks.com User , 14 years ago
When the Roman Catholic Church makes its traditions superior to scripture, and still under its latest pope declares all other Christian groups false in recent proclamations, who really are the "bigots" as other's have labeled this book? Where then do many of these uniquely unusual Catholic rituals originate? Certainly not the Bible. And if not the Bible, then give a more precise historical source. Even most Catholics would be surprised just how much of their church's background and practices have absolutely nothing to do with Christianity. The major reason for the Reformation and the establishment of Protestantism. The only problem today is that most so called "Protestants", accept the handed down traditions over scripture as well.

A Mixed Bag but worthwhile!!!

Published by Thriftbooks.com User , 17 years ago
Alexander Hislop's book the Two Babylon's is a mixed bag. On the one hand it is meticulously researched and does a great job of showing us how the Church (Mostly Medieval Catholic church) adopted and tried to christianize pagan symbols and practices. But on the other hand it is over kill and I disagree with his eschatology. I do not believe the office of the papacy is the Anti Christ (the beast out of the sea-gentile), the Bible clearly teaches that the anti Christ is a feature person who will be the head of a reformed European empire (maybe like the EU) he will be a secular leader (religions in worshiping Satan but not a religions leader) while the false prophet (the beast out of the land-Israeli) out of Israel will be the religions leader who backs him up. As a catholic (born again charismatic verity) I would encourage every catholic and every Christian to GET this book for the research aspect of it alone. It is filled with information we all need to know. Whit that knowledge we should challenge the extraneous doctrines in our church (assembly). such as the Mother and child worship and cults of the Virgin many in the catholic church, Why are we giving the attributes of the Holy Spirit to Marry? Why we call it the mass instead of services or an assembly? Why does the wafer have IHS on it? Why is it kept in a chamber with a pagan symbol on it? We should challenge the infallibility of the pope (only God is infallible), We should challenge the rosary it was given by an aspiration and we should challenge all aspirations (did anyone bother to test the spirit or spirits like the Bible commands us to? Did anyone check out the doctrine coming from aspirations against the scripture? And least and not least the most important error of all that salvation through faith and works, the bible clearly teaches salvation is by faith alone, a glorious gift (GRACE) from GOD; all James was pointing out is that a spirit filled believer will do good works as a matter of course, we do not take one verse in the bible and let it make the doctrine against hundreds of verses, It should be the other way around. Salvation is by grace though faith it is not of works least anyone should boast. In closing this book the two Babylon's can help us to clean out the extraneous and pagan doctrine from not only the catholic church but from all churches as we approach the end times, It is time (long overdo) to reach out and let the Holy Spirit work through us, and this book will help to equip us not to fall into pagan practices.

Published by Thriftbooks.com User , 20 years ago
Though not an "easy reader" it brings to light what is already known by truth seekers. A bad review of this book, unless supported by facts, is just a reaction to "pain". The truth hurts! If you sincerely compare pure christianity, with that of the "Church", you find that it is not one in the same. Sorry, the truth always comes out. This is not an anti-catholic publication, just a truth revealer.
Copyright © 2020 Thriftbooks.com Terms of Use | Privacy Policy | Do Not Sell My Personal Information | Accessibility Statement
ThriftBooks® and the ThriftBooks® logo are registered trademarks of Thrift Books Global, LLC