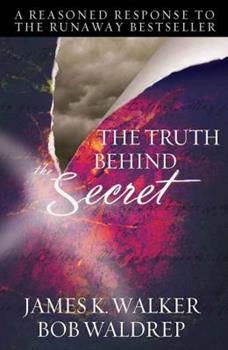 The Truth Behind The Secret: A Reasoned Response to the Runaway Bestseller

Apologetics experts Walker and Waldrep have written a thoughtful and biblically based critique of ideas contained in the runaway bestseller The Secret.

The Truth Behind The Secret: A Reasoned Response to the Runaway Bestseller

Published by Thriftbooks.com User , 14 years ago
This book is a very well researched and precisely presented answer to Ms. Byrnes book "The Secret". Mr. Walker and Mr. Waldrep do not merely express an opinion about her book, but have carefully documented the interviews and references that fully rebut her claims. I would strongly urge anyone who has read "The Secret" to read "The Truth Behind The Secret" before you throw away your prescriptions and abandon your chemotherapy, if you are a cancer patient, for instance. Her book is alluring and appealing at first glance, but like your Mama always said, if it sounds too good to be true, it just might be. Read "The Truth Behind The Secret" and you will know the real deal.

What's the Secret not telling you?

Published by Thriftbooks.com User , 14 years ago
The book 'The Secret' has been selling in the millions, everyone from Oprah to Larry King has had the contributing teachers from the book as guest on their tv programs. This book really breaks down what the Secret is all about. What you quickly discover by the 3rd chapter of this book is -- that the real secret is: who's secret it was, (hicks) and who's message it originally belonged to. You learn that the message and teachings of 'The Secret' which is the 'Law of Attraction' was a Channeled message through Esther Hicks by an entity known as Abraham, now how creepy is that? Is this secret really something a Christian wants to buy into? And if so, you just might get more then you bargained for. Without a true understanding of Christian meditation, (which differs noticeably) from what is presented in 'The Secret', a Christian could be easily mislead into metaphysical practices with harmful results. As the chapters go on the Authors take the claims of health and prosperity made in the book 'The Secret' and examine the scienific claims of the 'Law of Attraction' with a panel of Scientists, and also examine the medical claims from the Secret book. Walker and Waldrep write that 'The Secret' met it's early success in the mind science churches, and at metaphysical bookstores. The authors write that TIME Magazine reported -- that before The Secret was a mainstream hit, it was selling briskly at new age bookstores and New Thought churches like Unity and Agape (Beckwith's church) As to the Secret's origin of Religious teachings, it turns out that the booklist and the teachers Byrne's quotes in 'The Secret' - reveals almost all anyone needs to know. The teachings come out of the mind science religions, New Thought, and Christian Science and Unity. The doctrines practiced in Christian Science have been known to have dangerous consequences. Christian Science teaches that illness and suffering is an illusion. For the biblical Christian, 'The Secret' and it's associated teachings should be avoided. You can read the warnings in Deuteronomy 18:9-13. Would have preferred to see more scripture in the book, but in general, it was very well done.
Trustpilot
Copyright © 2022 Thriftbooks.com Terms of Use | Privacy Policy | Do Not Sell My Personal Information | Accessibility Statement
ThriftBooks® and the ThriftBooks® logo are registered trademarks of Thrift Books Global, LLC