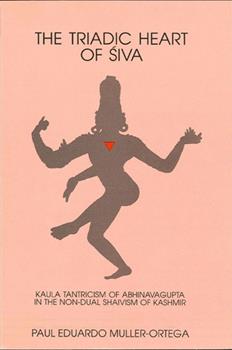 The Triadic Heart of Siva

This book explores one of the most explicit and sophisticated theoretical formulations of tantric yoga. It explains Abhinavagupta's teaching about the nature of ultimate reality, about the methods for experiencing this ultimate reality, and about the nature of the state of realization, a condition of embodied enlightenment. The author uncovers the conceptual matrix surrounding the practices of the Kaula lineage of Kashmir Shaivism.The primary textual...

Published by Thriftbooks.com User , 15 years ago
This book delineates the concepts of Abinavagupta's investiture of the heart or hridaya as metaphorically analogous to the centermost reality of supreme consciousness. This exposition becomes the vehicle for a foundational exploration into the historical development and conceptual underpinning of the Kaula lineage and its interweaving influence amongst the larger framework of non-dual Kashmir Shavism. Mr. Ortega's extensive research and refined scholarship is clearly evidenced throughout this work. While the literary style is thoroughly scholastic in disposition, one could presuppose that readers less familiar with the rigors of this venue could find the linguistic constructs unduly pedantic and inaccessible. This work is implicitly conceived as a scholarly interrogatory into the numinous symbology of the heart, and the author makes no supererogative overtures to attitudinize this as a pedagogical guidebook of mediation or tantric praxis. While those with a predilection for the trance state will find ample catalyst for such while ruminating over the significance of the weighty subject matter, the kernel of this work is largely philosophical in nature and its potency relies primarily upon absorption into one's own conceptual fabric. The onus of methodologically deciphering and putting into practice the myriad of specific kaula oriented techniques employed and espoused by Abhinavagupta, which are by and large beyond the parameters of this work, remains squarely on the shoulders, if not the heart, of the reader.

Published by Thriftbooks.com User , 16 years ago
This book contains priceless wisdom from a first-rate scholar, who, surely, must be an experienced tantric yogin! You could sincerely say that he has discovered & revealed the secret of the real holy Graal in these pages. It's very much a practical handbook on how to become immortal - like a lamp that lights the way to the god within. I hope Mr Ortega publishes more material like this. Better still, I wish he were my Guru to learn from first hand....

Abhinavagupta's teaching about the nature of ultimate reality

Published by Thriftbooks.com User , 16 years ago
The Heart as a metaphor for the enlightened experience of consciousness was masterfully revealed by the great Shaivist sage, mystic and scholar Abhinavagupta. Abhinavagupta "taught from a level of complete spiritual awakening with the authority of one who was considered a Siva incarnate." The study of these teachings, for the student able to attain and maintain meditative absorption, may be the basis for a radical transformation in consciousness to spiritually awakened Being in nondual freedom of awareness.

Published by Thriftbooks.com User , 22 years ago
Not only a rare and brilliant sanskritist, Paul Muller illuminates a once obscure mystical-religious tradition with the erudition of the most accomplished scholar. His rich background in the history of religion and familiarity with a seemingless endless variety of sanskrit texts show throughout his writing. He explains intricate spiritual concepts in straightforward terms and unearths the complexities of deceptively simple images, whose meanings might go otherwise unappreciated without his detailed explanations. Rock-steady in his approach, he somehow balances painstaking technical analysis with broad conceptual understanding. He traces around sanskrit words close to their sources, never straying far from the original texts. Moving beyond the literal, he also treats symbols as multilayered representations of human experience. His work exemplifies intellectual exploration and impeccable scholarship, but also packs rich insight and meaning. After reading more basic works, this is the one that will provoke new thoughts and a thirst for more knowledge about the complexities of indian religious and spiritual systems.

Published by Thriftbooks.com User , 22 years ago
This magnificent piece of literature contains wisdom so deep, so clear and so intellectually developed I am sometimes unable to read more than a sentence or two before I am plunged into a space of unrelenting power. Each sentence has been carefully worded as to not waste even one second of the student's time in speculation or controversy. It's as if Abhinavagupta, with his expert hands, surgically removes our ingorance of Shiva, in so doing, he leaves us unable to experience anything else! "The heart of Siva is not a static or inert absolute, however. In fact, the non-dual Kashmir Shaiva tradition considers it to be in a state of perpetual movement, a state of vibration in which it is continuously contacting and expanding..." The Triadic Heart pg. 82
Trustpilot
Copyright © 2022 Thriftbooks.com Terms of Use | Privacy Policy | Do Not Sell or Share My Personal Information | Accessibility Statement
ThriftBooks® and the ThriftBooks® logo are registered trademarks of Thrift Books Global, LLC