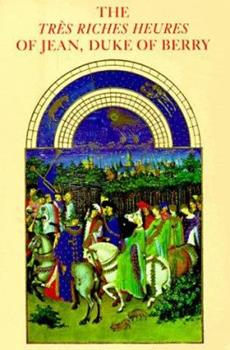 The Trés Riches Heures of Jean, Duke of Berry

'The Tres Riches Heures' is the most luxurious and most famous examples of manuscript illumination in late medieval Europe. Commissioned by Jean de Berry in the early years of the 15th century, this... This description may be from another edition of this product.

Published by Thriftbooks.com User , 18 years ago
Enter the magical medieval pages of the illuminated manuscripts of the gifted Limbourg brothers and discover a world long gone, but one which seems oddly familiar in a storybook sort of way. The colors (nicely reproduced in this hardback version of the book) will dazzle you - the skies were painted with an ultramarine made from costly lapis lazuli. The compositions, drawn in the pre-perspective days of the 15th century, will delight you. Many of the religious illuminations are moving - the Death of Christ captures the grim darkness into which the world has been cast in tones of grey and brown with only the shining gold halo of Christ piercing the gloom; God in his heavenly lunette above the picture looks sadly down on the scene, brilliant amidst reds, blues, and gold. But it is the pictures of the calendar - a wonderful record of daily life among the rich and the poor alike - that will charm you the most. The Duke feasts, the peasants warm themselves before fires, the plowman tills the soil, the farmers shear the sheep, and the pigs forage for acorns. And rising in the background of each of these magical scenes, in regulation storybook fashion, is a shining white castle. This hardcover version is a beautiful book that you will treasure for years.

The hardback version of this art masterpiece is awesome

Published by Thriftbooks.com User , 23 years ago
Having read negative reviews of the cheap, paperback version of this book, I took a deep gulp and sprang for the expensive hardback. This is a case where spending more for the hardback version is more than worth it. The pictures are very large size format, with the gold intact (unlike the paperback version). The quality of the paintings is excellent. The book is beautiful to display, look at and/or study. I have been copying one of the illustrations, and having a great time.I love medieval illustrated books. I have not found another one in this large a format, with such detail. If you are into illuminated manuscripts, you must have this one, there can be no argument. (Hardback version)
Trustpilot
Copyright © 2022 Thriftbooks.com Terms of Use | Privacy Policy | Do Not Sell My Personal Information | Accessibility Statement
ThriftBooks® and the ThriftBooks® logo are registered trademarks of Thrift Books Global, LLC