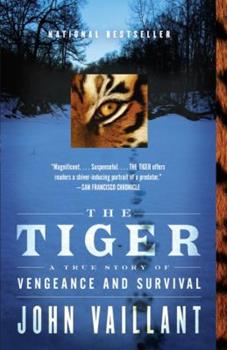 The Tiger: A True Story of Vengeance and Survival

A gripping story of man pitted against nature's most fearsome and efficient predator. Outside a remote village in Russia's Far East a man-eating tiger is on the prowl. The tiger isn't just killing people, it's murdering them, almost as if it has a vendetta. A team of trackers is dispatched to hunt down the tiger before it strikes again. They know the creature is cunning, injured, and starving, making it even more dangerous. As John Vaillant re-creates...

Published by Bev Ross , 1 year ago
I read this book more than once. Each time more layers of the vivid characters and their roles and experience of an epic tragedy reveal how nature can be a terrible adversary and how people can interact in ways that are profoundly courageous. A beautiful masterpiece.

Published by Thriftbooks.com User , 12 years ago
The Tiger is a success on three fronts. For one it is a thriller telling the true story of a Siberian tiger turned man hunter and eater and the hunt to destroy it. Secondly it is a rich tract describing the role of the tiger in nature and in relation to man coupled with a plea for its protection. Thirdly we are given a comprehensive description of life as it is (and was) in the far east of Russia. The story of the man eater is thrilling and it only took place about ten years ago. Elsewhere the book is extremely informative. A winner all the way.

Published by Thriftbooks.com User , 12 years ago
I have read suspense thrillers with less adrenaline than John Vaillant's THE TIGER. The true story of a man-eating tiger and its relationship with the land and people around it, the book is what page-turners are supposed to be. The fact that it's a true story is merely window-dressing. The book opens up with Yuri Trush, who leads a Russian unit that deals with tiger-related crimes (usually poaching), arriving on the scene of a brutal attack. The victim, poacher Vladmir Markov, and his dog have been torn to pieces; this is no ordinary killing. And the killer, a Siberian (or Amur) tiger, is out there, watching Trush, waiting. This isn't the beginning of the nightmare, however; this is but another act in a centuries-long saga between man and beast, conducted on the stage of the Russian taiga, where the rules of society no longer apply. THE TIGER manages to combine the ecology of its feline antihero, with the history of the region (which is actually closer to Australia than to the national capital of Moscow), and blends it all together with one suspenseful story. Vaillant's writing is crisp and sure, often ironic and amusing, but never dull. The book is relatively short, which actually helps the tension mount. At its heart, the book is a plea for environmental protection, as it should be; and yet, the reader should focus upon the story itself, which is unique and fantastic...and, you'll have to keep reminding yourself, entirely too true.

What are you waiting for? Grab The Tiger's Tale!

Published by Thriftbooks.com User , 12 years ago
The first impact of a tiger attack does not come from the tiger itself, but from the roar, which in addition to being like a loud jet, has an eerie capacity to fill space around it, leaving one unsure where to look. Look no further... you have found one of the best books. Although, the true story of a man-eating tiger that occurred December 1997, in a small Siberian village is very outstanding, in and of itself, there is a much larger story here. A story that is propelled by superb writing/Hanging in the trees, as if by a sickle of a moon/All is quiet in this dormant, frozen world... so cold that spit will freeze before it lands; so cold that a tree, brittle as straw and unable to control its expanding sap, may spontaneously explode... but their footfalls carry and so, with every step, they announce themselves to the night. A story that addresses some of today's important issues/It was a somber time made more so by the introduction of New Ruble, a devastating, if effective reset of the nation's currency. Already broke, the residents were minimally affected and limped on much as they had before... A story that concerns globalization/Much of what China makes from this Russain wood finds its way in American big box stores. But especially and significantly when it comes to the very survival of the species/... a tiger in the wild symbolizes by definition, a healthy environment. If there is enough land, cover, water, and game to support keystone species like this, it implies all creature beneath it are present and accounted for, and that the eco system is intact. In this sense, the tiger is an enormous canary in the biological coal mine. A setting in the boreal jungle is stunning/Primorye's bizzare assemblage of flora and fauna leaves one with the impression that Noah's ark had only recently made landfall, and that, rather than dispersing to their proper places around the globe, many of its passengers had simply decided to stay, including some we never knew existed. A story of inherent contradiction/There is deep irony in Trush's work,...where many people will tell you that it's impossible to live without breaking the law... the combination of poverty, unemployment, and highly dangerous people and animals exasberbates a situation that is, at best, untenable. Trush represents a lonely act of faith in a largely faithless system. A political story/Lenin may have envisioned it, but Stalin mastered it: the ability to disorient and disconnect individuals and large populations, not just from their physical surroundings and core communities but, ultimately, from themselves. And there is a lot of humor/ What is chaos? We do not comment on economic policy./Is it possible to make ends meet on salary alone? We don't know, we never tried. The story had me laughing out loud a number of times. For instance, the dialogue on the hunt is very, very funny as it is very, very dangerous. And, of course, there is a lot of corruption/Oil, timber,, humans, and tiger

Terrific, tangential tale of tiger-terror on the taiga

Published by Thriftbooks.com User , 12 years ago
The words of Sergei Boyko (p 133), "the tiger is such an unusual animal: very powerful, very smart, and very vengeful," succinctly sum up the behavior of the Amur tiger that, according to the evidence, vindictively stalked and killed a poacher in the 1997 incident that author John Vaillant recounts in this true tale set (p 7) "in Primorye Territory in Russia's Far East, not far from the Chinese border" (p 21) "Russia's southeasternmost territory." Although the CSI-like particulars of the investigation, tiger tracking, and what-went-down-once-he-was-found could have probably been handled in under a hundred pages, the author's ability to go off on intriguing tangents is one of the book's best features. Vaillant provides a brief, beneficial description of almost every person (of which there are many) that he introduces. For example, of Ivan Dunkai, he writes (p 102) "In life he was a twinkly-eyed, elfin man who evoked a gentleness and wisdom that seemed from another age." The author is equally good at stuffing the story full of all sorts of facts, figures, and bits of trivia about the ample, wide-ranging topics he chooses to include, like: the Afghan War; alcoholism; Armenian Radio; behavioral ecology; conflicts with China; cultural issues; devaluation of the ruble; economic issues of the region; Amur tigers; explorers; the Gulag; life expectancy; Perestroika; poaching; Russian proverbs; Stalin; vegetation, weather and wildlife of the taiga. In summary, author John Vaillant does justice to the genre yet again in this non-fiction, fact-filled book about much more than is implied by its simple title. Additionally, according to the author, (p 311) "A portion of the proceeds from this book [is] being donated to several organizations working on the front lines of the tiger protection effort in Primorye." Lastly, the translation of names of Russian cities into English is a bonus, as is the content of the epilogue, which updates the reader on the status of some of the story's major players. Also good: Coming Out of the Ice: An Unexpected Life by Victor Herman (in unabridged MP3 format or not at all), Zinky Boys by Svetlana Alexievich, and Into Thin Air by Jon Krakauer.

Published by Thriftbooks.com User , 12 years ago
Someone asked me recently what sort of non-fiction I like to read, and I had to think about it. I have a few niche areas that I enjoy, but generally all I ask of a book is that it keep me engaged and give me something to think about. This approach means that I read a lot of books in areas where I have no expertise and little real interest, merely because someone did a great job of presenting the material and I got hooked. "The Tiger" is one of these books. Primarily it's the story of a tiger, hungry, injured, and irritated, which starts killing off the members of a Russian community, and of the men tasked with tracking the tiger and killing it. But there's a lot more here, too: interesting background on tigers and other animals, and how they hunt; the culture of the Russian Far East, including issues surrounding the Chinese-Russian border; the effects of perestroika on poorer Russians. And it's all woven together in a manner that made me want to keep reading. I was particularly intrigued by how recent the events in the story are, being from the late 1990s. The people depicted are clearly on the fringes of Russian society, living literally hand to mouth just to stay alive. That someone could have a TV and other modern conveniences, and still rely for their survival on hunting small game and gathering pine cones, was not something that had occurred to me. Also interesting were the observations on how, through many years, tigers and people have lived together peacefully in the Far East, yet in a balance so fragile that either may be forced to hunt the other just to survive. And of course there are some fascinating statistics on tigers, both their declining numbers, and their physical abilities. While this book is footnoted and has an extensive bibliography, I would suggest it for anyone who simply likes a good adventure story. It's a great read!
Trustpilot
Copyright © 2022 Thriftbooks.com Terms of Use | Privacy Policy | Do Not Sell My Personal Information | Accessibility Statement
ThriftBooks® and the ThriftBooks® logo are registered trademarks of Thrift Books Global, LLC