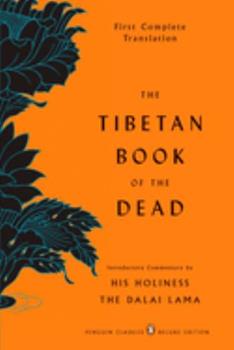 The first complete translation of a classic Buddhist text on the journey through living and dying Graced with opening words by His Holiness The Dalai Lama, the Penguin Deluxe Edition of The Tibetan Book of the Dead is "immaculately rendered in an English both graceful and precise." Translated with the close support of leading contemporary masters and hailed as "a tremendous accomplishment," this book faithfully presents the insights and intentions...

complete, but not information

Published by Thriftbooks.com User , 12 years ago
this book is complete. it is for someone who dedicates their life to buddhism, but can't understand the language. if you want information on buddhist thinking, there's a nice lengthy introduction from the dalai lama. you'll need a personal guru or master to add to this book. 5 stars because it is what it is.

The Tibetan Book of the Dead

Published by Thriftbooks.com User , 13 years ago
I purchased this book for my 20yr old nephew, as he indicated he was very interested in the contents. I was absolutely thrilled to receive the book in perfect (like new) condition! The book was meticulously wrapped and was received in prompt order. I will use this service again. My nephew was very surprised and delighted to unwrap his "new", book on Christmas morning! He perceives the book as brand new. You really can't tell the difference.

Tibetan Book of the dead

Published by Thriftbooks.com User , 13 years ago
An old book brought to life. interesting research in the india's believe system of reincarnation. The souls travels after death back to reincarnation.

It would take you a lifetime to understand this book.

Published by Thriftbooks.com User , 15 years ago
I just got this book, and it is so deep and exciting I want to just study it forever to find out all about what it has to say.

Published by Thriftbooks.com User , 16 years ago
The Tibetan Book of the Dead edited by Graham Coleman, Thupten Jinpa, translated by Gyurme Dorje (Viking) is by far the most popular example of indigenous Tibetan Buddhist treasure literature. An edition was issued in 1927 by Oxford University Press under the general editorship of W. Y. Evans-Wentz. The block-print copy, he used was an abridgment obtained in Nepal and translated by a Tibetan lama. Evans-Wentz was a scholarly Theosophist who imported certain Theosophical preconceptions into his commentary on the work. Carl Jung the prominent analytical psychologist even wrote a psychological commentary on the work prompted by Evans-Wentz. Since the 1970s, beginning with Francesca Fremantle and Chogyam Trungpa's edition of the text and more recently Robert Thurman's translation, corrected versions of the Tibetan Book of the Dead are well represented in English and other European languages. The mistakes and egregious errors of the pioneering edition have been corrected and Tibetan Buddhism now in America and Europe has been flourishing with many translations and commentaries on basic Buddhist practices as well as the indigenous literatures of Tibet. This new edition by Graham Coleman and Thupten Jinpa uses a fuller edition of the work for translating, adding new chapters and reflecting the interpretation of contemporary masters and lineage holders of this tradition. In many ways this is the first complete The Tibetan Book of the Dead. In many ways this book is both a guide for living as well as a how to consciously move on after death. The book has been extremely popular in Central Asia among Buddhists. The Tibetan Book of the Dead contains especially written guidance and practices related to transforming our experience of daily life, on how to address the process of dying in the after-death states, and on how to help those who are dying. Some of these teachings include: methods for investigating and cultivating our experience of the ultimate nature of mind in our daily practice, guidance on the recognition of the science of impending death and a detailed description of the mental and physical processes of dying, rituals for the avoidance of premature death, the now famous great liberation by hearing that is read to the dying and the dead, special prayers are read at the time of death, and allegorical masque play that lightheartedly dramatizes the journey through the intermediate state, and a translation of the sacred mantras that are attached to the body after death and are said to bring liberation by wearing. The editors have also included two additional texts are not usually included in the first chapter there is a preliminary meditation and practices related to the cycle of teachings, and in chapter 10, instructions on methods of transforming consciousness at the point of death into a enlightened state and are an essential aspect of the practices related to dying. The editors have gone out of their way to be sure to relate what the ac
Trustpilot
Copyright © 2022 Thriftbooks.com Terms of Use | Privacy Policy | Do Not Sell My Personal Information | Accessibility Statement
ThriftBooks® and the ThriftBooks® logo are registered trademarks of Thrift Books Global, LLC