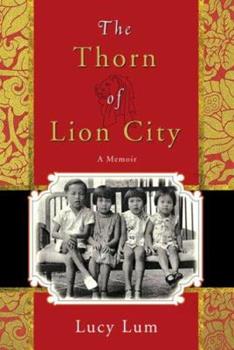 The Thorn of Lion City: A Memoir

Lucy Lum was the third of seven children, born in Singapore in 1933 into a Chinese immigrant family ruled with an iron hand by Popo, her fearsome and superstitious grandmother. Popo is a firm believer in the old ways, in stomach-churning herbalist remedies, in the dubious fortune-telling of mystics, and in mischievous little girls like Lucy knowing their place. She is forever dispensing her own wicked brand of justice, much to the despair of her adopted...

Published by Thriftbooks.com User , 14 years ago
Lucy Lum's "The Thorn of Lion City: A Memoir" is based on her account of life during World War II in Singapore when the city was occupied by the Japanese army. She grew up in a household where her maternal grandmother was the head of the family even though her father worked as an interpreter for the Singaporean and later the Japanese government. Her grandmother and mother favored sons over daughters and because of that Lucy was frequently abused and neglected. Lucy had great admiration for her father who was the source of strength for her. The memoir was focused mostly on her family relationships with the backdrop of the Japanese war occupation. This was an interesting account of growing up during World War II in Asia. The author's writing was clear and concise, making it an engaging read. The cultural background that Lucy provided was also helpful for those unfamiliar with traditional Chinese values. I would recommend "The Thorn of Lion City" for those who would like to learn more about the complexities of a typical Chinese family during the late 1930s and 1940s.

Published by Thriftbooks.com User , 15 years ago
A harrowing memoir of growing up in Singapore during the Japanese WWII invasion, Lum's story pays tribute to her quiet, scholarly father, whose kindness and sense of duty bring him no peace. Son of a Chinese immigrant, married early, a father by the age of 17, Po Lum was thrown on the mercy of his mother-in-law, Popo, when his mother died and his stepfather cheated him of his inheritance. Forever after, Popo ruled the family, a violent, superstitious, fiercely traditional harridan who abused the girl children and coddled the boys. Lum tells of air raids, house requisitions, the cruelties of the Japanese soldiers who particularly hated the Chinese, food scarcity, the black market and the ingenuity of desperate people. The Japanese remain scary, impersonal embodiments of inhumanity, but the real, visceral horror is in the home, where slave children's lives are casually disposed of and outsiders are shunned. Devoid of compassion, Popo is a monster, but a very human one, and her daughter, Chiew-wah, adopts much of her cruelty though few of her strengths as the story proceeds. Both women beat the girl children - and worse - while the boys, particularly the eldest, connive at the girls' debasement. Yet Lum's spirit perseveres, nurtured by her linguist father's kindness and love. Po Lum, unlike most Chinese in Singapore, retained his job. A government interpreter, he worked for the Japanese, so his family was better off than most and often appealed to for favors and charity. Popo's and Chieuw-wah's behavior toward him is so abusive and contemptuous as to boggle the mind, since he is the family's financial mainstay. Yet the story rings true. The reader will leave this wrenching chronicle of cruelty, powerlessness, resourcefulness and despair wondering how the children, particularly the plucky, bewildered Lucy, faired in later life.
Trustpilot
Copyright © 2022 Thriftbooks.com Terms of Use | Privacy Policy | Do Not Sell My Personal Information | Accessibility Statement
ThriftBooks® and the ThriftBooks® logo are registered trademarks of Thrift Books Global, LLC