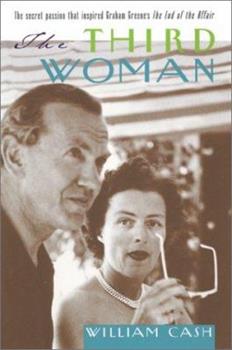 The Third Woman: The Secret Passion That Inspired "The End of the Affair"

This is the enthralling true story of the novelist Graham Greene and the woman who splintered his heart in one of the twentieth century's epic romances. In December 1946, on a snow-covered airfield in... This description may be from another edition of this product.

If you like Graham Greene, you must read this book

Published by Thriftbooks.com User , 14 years ago
Graham Greene is one of my favorite authors and when I decided I wanted to read about his real life story, I found that most other biographies about him are quite lengthy. This one is a gem and really offers insight into his feelings for the woman, Catherine Walston, who inspired him for so many years. This biography of their love affair makes it easy to understand her influence on his work.

The real story - at last.

Published by Thriftbooks.com User , 21 years ago
After the hulabaloo of the recent film version of The End of the Affair, William Cash's book was a timely arrival, and a refreshing one. Like Cash, many Greene scholars feel that Greene's works are too frequently confused with his life. Art and life are distinct enough with most writers, but Greene more so, as he himself made many requests to his reading public to please not confuse his fiction with fact. Neil Jordan's film, however well-done, fell into this confusing fact with fiction trap, and even went so far as to cast Julianne Moore in the role of Sarah because she so resembled Catherine Walston (despite the fact that she does not fit the description of Sarah Miles). Cash's book blows open the doors that have been shut too long on the real story of the 'end of the affair' and shows us how different, in fact, Greene's relationship was from Bendrix's.Cash's research, which was carefully and meticulously done, is written out in a clear and readable style, and his collections of anecdotes and new stories (so much, after all, has already been written) makes the book a goldmine for a Greene scholar. Cash's interview(s) with Vivien Greene, in particular, are valuable in what they tell us about their marriage and about Greene as a person - Greene's faults are laid open for us all to see, and while some of what is revealed pains the reader, it is helpful, all the same, in putting Greene's work in perspective to his life.An impressive piece of writing overall and a much-needed contribution to the vast field of Greene scholarship. However, the main shortcoming of the book is that it lacks an index, and should a second edition be in the works, it would much behoove Cash to compile one.

Published by Thriftbooks.com User , 21 years ago
I am a lover of Greene's books and one of my all time favourite books is the End of The Affair so i enjoyed this immensely. It really made me appreciate what a complex person Greene was. I found myself being drawn in on what are at times quite mundane facts but nonetheless facinating. Catherine Walston remains a mystery to me. Well worth a read if ,like me you read the End of the Affair and wanted to find out more about the real story behind it. Very enjoyable

Published by Thriftbooks.com User , 21 years ago
I'm a Graham Greene addict and have just really enjoyed Gloria Emerson's "Loving Graham Greene". I liked the Neil Jordan film of The End of the Affair and read a rave review of this true account of the real life love affair between Greene and his American nymphomaniac mistress Catherine Walston in The London Spectator whilst visiting England earlier this year for an antique fair. I got a signed copy at Hatchards and read it on the plane on way back to New York and loved it. The book is a sort of literary detective investiagation into the importance of adultery to literature, played out against a background of Ireland, Paris, London, Rye, New York --- where i have family -- and Cambridge. Catherine Walston is one of the most intriging muses of modern literature, like Slyvia Plath only more erotic and dangerous. How Greene managed to still write his 500 words a day i have no idea. Anyhow, I'm giving this book as Christmas presents to several of my literary friends...Pity their are no pix in the book, other than on the cover.
Trustpilot
Copyright © 2022 Thriftbooks.com Terms of Use | Privacy Policy | Do Not Sell or Share My Personal Information | Accessibility Statement
ThriftBooks® and the ThriftBooks® logo are registered trademarks of Thrift Books Global, LLC