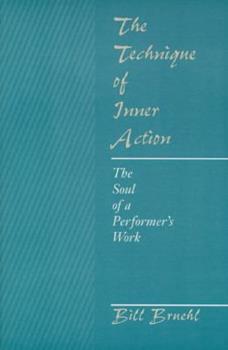 The Technique of Inner Action: The Soul of a Performer's Work

Focusing on the inner work of a performer, this book expands internal action into a comprehensive discipline for developing an inner technique. It argues that authentic emotions are expressed when performers focus on the aspirations of their character and on the flow of actions in the play.

Published by Thriftbooks.com User , 20 years ago
The Technique of Inner Action goes right to the core of convincing and powerful acting -- the active attempt on stage by the actor to get what he or she (as the character) wants, or, as Bill Bruehl puts it, the pursuit an inner action that the character wants to achieve. The book makes very clear -- for the professional and amateur thespian alike -- the critical difference between forcing emotion and the more productive and emotionally charged pursuit of the character's goals and objectives (or what theatre people refer to as fulfilling the character's arc, spine, or through-line). So insightful and concise are Bruehl's pointers that I use his book in my theatre and playwriting classes at Ramapo College of New Jersey. My wife, a vocalist, found Bruehl's practical technique useful in enhancing the vitality of her performances. I strongly recommend this uncomplicated, how-to approach to effective acting to anyone who performs, writes for performers, or directs and/or assesses performance.

Essential Reading For Actors and Performers

Published by Thriftbooks.com User , 20 years ago
Greetings,It is with great pleasure that I take this chance to bring this great work to the attention of others'.I was so impressed by this book's simplicity and affective communication of the central place that "inner action" holds for an actor's work, that upon coming across and reading, "The Technique of Inner Action: The Soul of a Performer's Work" - I was moved to find and contact its author to express my appreciation for his contribution to my teaching the craft of acting. As a student of Sanford Meisner's, I had been well trained in the "Reality of Doing." Unfortunately, I had always been at a loss to provide a written document for the vital importance of this concept to my students until Bill Bruehl's book came on the scene. "The Technique of Inner Action: The Soul of a Performer's Work" is the only book that I always use in my classes. I always provide it to my performance-consulting clients. I never fail to recommend "The Technique of Inner Action: The Soul of a Performer's Work" when the chance arises to give someone a tangible and practical description of how they can improve the quality and impact of any performance. I can not say enough about its practical value to the actor, performer, teacher, or to anyone who would communicate in public, or private for that matter.Sincerely,José Angel Santana - Actors In Training: The Meisner Technique

A superb introduction for actors and audiences

Published by Thriftbooks.com User , 20 years ago
This book is a must for serious students of acting, for critics and for audience members who wish to understand the basics behind great acting. Focusing on late Stanislavsky theory - meaning less on the state of being than on the action of doing - Bruehl clearly sets out the actor's task in jargon-free prose and with a precision that makes the craft approachable to all. For too long, the craft of acting has been steeped in mystical hogwash, rather than acknowledged as a learnable trade. Granted, knowing the craft will not automatically make one a first-rate actor. That still takes talent. But Stanislavsky and others have found a means of teaching this craft and training future artists, and now Bruehl can be added to their lists.
Copyright © 2020 Thriftbooks.com Terms of Use | Privacy Policy | Do Not Sell My Personal Information | Accessibility Statement
ThriftBooks® and the ThriftBooks® logo are registered trademarks of Thrift Books Global, LLC