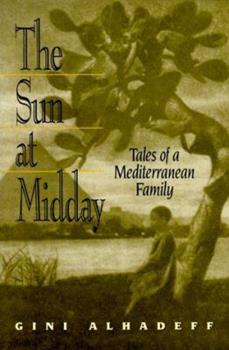 The Sun at Midday: Tales of a Mediterranean Family

For Gini Alhadeff, there was rarely a difference between feeling at home and feeling foreign. Born to an Italian family in Alexandria, Egypt, she lived in places as far-flung as Cairo, Khartoum, Florence, and Tokyo; raised Catholic, she did not learn of her Sephardic Jewish roots until she was living in New York in her twenties. In The Sun at Midday, Alhadeff traces her unusual ancestral history, seeking the source of her chameleon-like skills of...

Published by Thriftbooks.com User , 25 years ago
Fascinating history of a sephardic family from Inquisition days to modern times. Well told, if a bit self indulgent

Published by Thriftbooks.com User , 25 years ago
'The Sun at Midday' reviewed by Samir Raafat for the "Cairo Times" Thursday, April 17, 1997 IN HER BOOK, The Sun at Midday, the Alexandria-born Gini Alhadeff runs us through the different members of her family which means flashbacks from Tokyo, Northern Italy, Alexandria, Buenos Aires, Auschwitz, Rhodes, Greenville (Mississippi) and back. The habitats range from palatial villas in Alexandria to a two-room flat in Manhattan with a reference to the Italian fashion house of Krizia founded by the author's aunt, Mrs. Aldo Pinto née Mariuccia Mandelli. Gardens are everywhere, all of them heavenly, the scent changing with each season and every repatriation. With the help of a desk top computer and a `Family Tree Maker' software, genealogy buffs will love this book as they eagerly enter a collection of Byronic Mediterranean names belonging to the author's relations: Pinto, Piha, Menashe, Aghion, Tilche, Riches, Alhadeffs, etc., discovering in the process that most middle class Jewish families in Alexandria were connected and that they made good wherever destiny took them. And how, through marriage, they were also related to Lawrence Durrell! Undoubtedly, these colorful relations is what makes Alhadeff's family worth writing about. Of all her ethnic and national identities, the reader senses that Alhadeff is taken in mostly by her Jewish ancestry. Not unlike US secretary of state Madeleine Albright, Alhadeff discovered her rabbinical roots - in this case Sephardi - in her adulthood. A consequence of this revelation is the Judaica which is palpable throughout `The Sun at Midday.' And just in case anyone overlooks the plight of her relations this century thinking it was simply a matter of colorful trips across five continents, Alhadeff gives extensive coverage of her Uncle Nissim's sojourn in several German-run WWII concentration camps. Nissim's story is the longest recit allocated to any single member of the author's family. This lengthy chapter would have been five times as interesting had one not repeatedly stumbled on analogous passages in any of the thousands of books, novels, thrillers, articles, films and CD-ROMS that deal with the subject. And with Alhadeff's book appearing soon after Daniel Goldhagen's encyclopedic work on the subject (`Ordinary Germans and the Holocaust'), Uncle Nissim's episodes seems somewhat parochial. In her character portrayals, which takes up a good part of her book, Alhadeff is both amusing and direct. Yet, when it comes to describing geographic locations, facts and some of the zeitgeist surrounding the events, beware with a capital B. Alhadeff could have made sterling use of a beginner's Atlas and an Almanac. Some elementary cross-checking with regards her family's oral testimonials would have also helped. On the other hand, if Alhadeff's representations of her relations are as spot on as her description of Father Pierre Riches, the Jewish dandy turned Catholic priest, then, Bravo
Trustpilot
Copyright © 2022 Thriftbooks.com Terms of Use | Privacy Policy | Do Not Sell My Personal Information | Accessibility Statement
ThriftBooks® and the ThriftBooks® logo are registered trademarks of Thrift Books Global, LLC