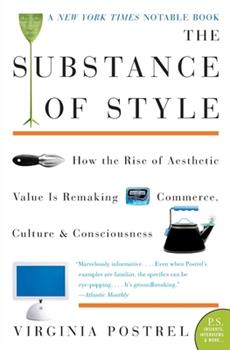 The Substance of Style: How the Rise of Aesthetic Value Is Remaking Commerce, Culture, and Consciousness

Whether it's sleek leather pants, a shiny new Apple computer, or a designer toaster, we make important decisions as consumers every day based on our sensory experience. Sensory appeals are everywhere, and they are intensifying, radically changing how Americans live and work. The twenty-first century has become the age of aesthetics, and whether we realize it or not, this influence has taken over the marketplace, and much more. In this penetrating,...

Published by Thriftbooks.com User , 17 years ago
You can share the author's thrill of discovery as she uncovers something new about ourselves and our visual culture. The Substance of Style is a fascinating and well-thought out book that is hard to put down. As an artist and art professor I find particularly refreshing Postrell's insights and informed optimism about the immediate future of art and design in the world. Postrel has done her homework on art, design, and aesthetics. As an outsider to the artworld (an economist writing for publications ranging from the New York Times and Reason Magazine), she offers new insights in the stuffy and exclusive club of academia, aesthetics, and art theory. Such cross-fertilization of disciplines offers the potential for break-though observations. Postrel's book proves this point by introducing consumer preferences, the creativity and competition of the marketplace, and product distinction as central to "good" design. The author gains from others who have likewise crossed their disciplines with art and aesthetics. The observations and findings of noted anthropolgist, Ellen Disanyake is an example. Disanyake studied the visual arts in a wide range of non-western cultures and found some basic similarities in why art (and decorative artifacts)are produced. Essentially she claims that art is "to make something special." That's it. And in a marketplace driven economy such as the United States, this function of art (and design) is finally being recognized and treasured again after decades of confusion and inreasing academic exclusiveness about the purpose of art. I particularly enjoy Postrel's tongue in cheek summay of form-follows-function purism. She proposes something that must infuriate the purists; A chair's purpose is not to express a modernist idea of "chairness," but instead is to please its owner. Enjoyment and pleasure are attitudes that too much of the artworld has lost. I find Postrel's anti-establishment writings to be similar to those of distingushed architectural revolutionaries Robert Venturi, Denise Scott Brown, and James Wines. Her critical eye also is reminscent of author Tom Wolfe ("From Our House to Bauhaus") as he roasts society's self appointed guardians of good taste. Virgiinia Postrel builds a convincing and optimisitic case on the role of art and design that must dismay Marxists and others with a negative world view. She does not buy into the premise that that the function of good design is subservient to solving world problems. The function of good design she argues is simply to make life enjoyable. Not a bad idea... but that pisses off a lot of people.

Are We Having Fun Yet?

Published by Thriftbooks.com User , 18 years ago
Virginia Postrel's "The Substance of Style" is smart, fun to read, and correct. She tells us that we have entered the "Age of Aesthetics," a time when beauty and style are to be found everywhere, at least for market economies. Every product, every place, and every experience now is supposed to offer a touch of the aesthetic. The reason is simple: increasingly wealthy and sophisticated customers demand "an enticing, stimulating, diverse, and beautiful world." (p.4)The book surveys a wide variety of trends -- from fashion to cosmetic surgery to restaurant design -- and shows how they fit this common pattern. We hear about Martha Stewart, Starbucks, the iMac, fashion magazines, tiled floors, nice salad bowls, and the Michael Graves brush from Target. The age of Wonder Bread is gone, and the middle class can now buy a sense of style previously reserved for the wealthy. Postrel declines the enterprise of demarcation and does not try to draw a boundary between art and the pleasures of daily life. Some of the best passages concern globalization. In Turkey the number of interior design magazines has number from one to forty in a decade. Japan is becoming a fashion capital, while South Korea and Singapore are becoming centers of design (p.14). Any reader of my own works, which stress how commerce brings us plenty, diversity, and creativity, will not be surprised how thoroughly I agree with Postrel. So I will spend the rest of this review outlining my primary worry with the book, noting that my own research is open to the same questions.To put it bluntly, sometimes I wonder just how much these aesthetic developments make us better off. No, I am not advocating a return to Mao's gray pajamas. I believe in market-oriented capitalism, including for the arts. But could the baroque proliferation of the aesthetic, in all of its manifestations, be an unimportant epiphenomenon, distinct from the main success story of capitalism? Could "the Buff Revolution," as we now describe the new and growing obsession with male bodies, be a temporary and not very effective antidote against our underlying boredom?Postrel (pp.74-77) does an excellent job arguing against Bob Frank's relative status idea. We want beauty for its own sake, and not just to look better than others. I will add that the interiors of American homes, over the last few decades, have improved much more than their exteriors, contra to what Frank's hypothesis would predict. But does beauty make us much happier? Perhaps we get used to our frame of reference and quickly take new beautiful objects as part of our assumed background. Postrel's own text points to some of these worries. We are told "Design that was once cutting edge is now a minimum standard, taken for granted by customers." (p.19) Later she writes: "The aesthetic age won't last forever. The innovations that today seem exciting, disturbing, or both will eventually become the backgrounds of our lives. We won't notice them unles

Published by Thriftbooks.com User , 18 years ago
This book convinced me I was not nuts. Not the my-dog-wants-me-to-kill nuts, but the sinking feeling that no one else is thinking like you when you decide you absolutely hate your kitchen cabinets.Virginia Postrel shows us that millions of people are thinking about the look and feel of things -- their door knobs, their pagers, their alarm clocks, their cabinets -- and, moreover, that it is a perfectly normal human interaction with the world around us.This copiously footnoted book explains how the urge to decorate ourselves and our surroundings has always been with us and has only accelerated with modern means of production. In sum, the desire for stylish things is not the product of Madison Ave. manipulation, but the brains we climbed out of the trees with on the African plains.With all these natural designers now on the loose and with previously unavailable ways to express their style in their hands, conflict is inevitable. But Postrel shows how it can be clumsy at best to try and impose a top-down style on neighborhoods or commercial development. You end up with elected officials with no better taste or sense of style than anyone else -- and that is being kind -- deciding that things like glass block just does not fit their vision of what a building should be. Better to reconcile yourself to the fact that different people like different things and move on.Like it or not, the Aesthetic Age is upon us and there will be no going back to just the old duopolies of style -- Contemporary or Colonial, Preppie or Punk, Casual or Formal, not when there are a dozen quite distinct variations on Goth alone. It is a measure of how important aesthetics have become that if you work in retail, marketing, real estate, auto sales, or the hospitality industry, you need to read this book.The rest of you could do worse things with your time, too.

An incredible exploration of the economic impact of design

Published by Thriftbooks.com User , 18 years ago
Over the course of the last ten years, design has undergone an profound economic and cultural renaissance. After years of producing ugly, 'merely' functional products, modern industry has begun to awaken to the power of aesthetics - witness the iPod, the Cooper Mini, and Michael Graves housewares in the aisles of your local Target. Powered by new technologies and a recognition that design is a powerful business differentiator, we've experienced a tremendous flowering of aesthetic forms and choices. Lots of critics suggest that this great multiplication of forms is wasteful, decadent, or superficial, but author Virginia Postrel provides a very compelling defense of the aesthetic economy, with lots of engaging prose and examples. She untangles the complex forces that have underwritten design's rebirth. And she suggests that we can find not only pleasure in style, but deep meaning as well. This is as cogent and compelling an exploration of design as I have ever read. Everyone, (and especially designers) who want to understand the rise of the Age of Aesthetics should have a copy of this book on their shelf.

Fascinating Look at How and Why Style Matters

Published by Thriftbooks.com User , 18 years ago
Upon first hearing of Virginia Postel's new project, I confess I was somewhat taken aback. After her fascinating analysis of political thought in The Future and Its Enemies, what was she doing writing about something as ephemeral as style? I therefore approached her new work with some trepidation, as I wasn't sure where she might take such an odd (to me) topic. I needn't have worried.The Substance of Style is one of those books that is almost annoying, because in it Postrel has identified a trend that is so pervasive that once you've read the first few chapters, you look around you with new eyes, noticing things that have been there all along but that you accepted as simply part of the backdrop. As products have become better and better, Henry Ford's famous dictum (You can have any color as long as it's black) can no longer hold. When the average product can easily accomplish its intended purpose, function no longer holds the same relative importance. Form, once an afterthought, becomes more and more important, because we can afford to consider it. And so we face a world where we can change the color of our cell phones and lap tops to match our mood, and Apple's latest computers are seen as works of art as much as functional systems.Better yet, Postrel ties this age of aesthetics to her prior work in The Future and Its Enemies. As in politics, she identifies the aesthetic conflicts between those who want to leave people free to determine what works best for them, and those who prefer to determine 'one best way,' whether in housing, fashion, style, or whatever else. Postrel clearly comes down on the side of those who prefer fewer constraints, and she defends her position very well, particularly when noting how many things we all take for granted today were spawned by the near free-for-all of dynamic creation and competition.Postrel's writing is concise and clean, making the book a very easy read. Through her use of numerous contemporary and familiar examples, she is able to tie her points to common experiences, making the work that much more powerful.Like it or not, the age of aesthetics is upon us. If you have any interest at all in understanding how it will affect you, read and enjoy this terrific work.
Copyright © 2020 Thriftbooks.com Terms of Use | Privacy Policy | Do Not Sell My Personal Information | Accessibility Statement
ThriftBooks® and the ThriftBooks® logo are registered trademarks of Thrift Books Global, LLC