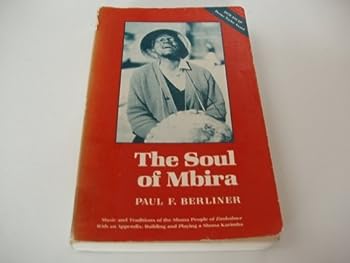 The Soul of Mbira: Music and Traditions of the Shona People of Zimbabwe

A scholarly portrayal of Shona musicians and the African Musical tradition. l Berliner provides the complete cultural context for the music and an intimate, precise account of the meaning of the... This description may be from another edition of this product.

The quintessential work on Mbira

Published by Thriftbooks.com User , 16 years ago
Excellent! An in depth study of the music and the traditions and culture that are the driving force behind the music. Any serious study of the mbira must include this book.

Good coverage of the topic

Published by Thriftbooks.com User , 22 years ago
Anyone who liked _Thinking in Jazz_, another Paul Berliner book, will probably enjoy _Soul of Mbira_. It takes a similar approach, looking at the history, sociology, tradition and musical nature of the Shona mbira (also known as the kalimba, sanzhi, likembe, or 'thumb piano' - though after you hear Paul's comments on the latter name, you won't want to use it again). Other musical instruments by the Shona are also covered, but to a much lesser degree. The section on performance is nice, but it is the part which suffers most from 'dancing about architecture' syndrome. The appendix on 'building and playing your own mbira' is informative, but unless you have access to an anvil and fire, not very practical! It isn't hard to modify the design and make your own anyway, though, it just won't be as traditional.
Trustpilot
Copyright © 2022 Thriftbooks.com Terms of Use | Privacy Policy | Do Not Sell My Personal Information | Accessibility Statement
ThriftBooks® and the ThriftBooks® logo are registered trademarks of Thrift Books Global, LLC