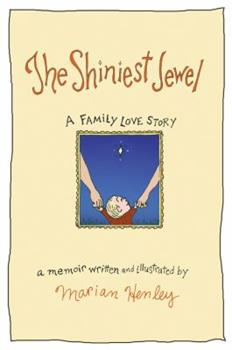 At 49, cartoonist Marian Henley hasn't committed to marrying the man with whom she has been dating for seven years. But as the Big 5-0 looms, she realizes that above all else she wants a child. Her story follows the heartbreaking ups and downs of going through the international adoption process; deciding when it's time to grow up and maybe even get married; and in the end, it's the story of a daughter's relationship with her father, and how becoming...

What a darling discovery!

Published by Thriftbooks.com User , 13 years ago
I love autobiographical comics in the vein of Persepolis and Blankets. But then, I also love more spontaneously made indie fare like Snakepit. The Shiniest Jewel wonderfully manages to bring the best of both veins together. There is the insight and honesty I cherish in autobiographical comics, and at the same time Henley's art and pacing demonstrate a flash of spontaneity that make the experience pop vividly. While I have enjoyed Henley's Maxine comics in the past, this is by far my favorite thing she has done. She shares this seminal moment in her life gracefully, poetically, and best of all, entertainingly. Top marks.

Published by Thriftbooks.com User , 13 years ago
Marian Henley's The Shiniest Jewel is a moving graphic memoir about, at its core, life and death, the two intertwined here in her search for a baby to adopt, and the poor health of her aging father. Her circumstances are unusual: she's 49 and unmarried, though she has been with her boyfriend, Rick, for a decade. What's outstanding about this book is how powerful Henley's illustrations are, often saying so much more than her words. She shows her horror at the idea of marriage with a series of grotesque faces. She makes though bubble asides, one of the funniest of which is when she finally does decide to get married, and as she publicly says "We just adopted him from Russia!" she's thinking, "So, you see I'm not a slut." Another priceless one is when she's being interviewed about adopting, she gets yelled at by a woman who, in the drawing, practically breathes fire. The babies, first Sergey, whose adoption falls through, then Igor, who she winds up adopting and calling William, are less cute and perky than most images of babies we see. They are more solid, chunky, in Henley's version. This is also a bit of a warning to those looking to adopt through an agency. Henley almost has a breakdown when her visit to Vladivostok is almost for naught when the staff of her agency fails to tell her she needs a certain document. Though she doesn't explicitly offer advice, and she is someone who did her research, the point comes across that no matter how prepared you are, there will likely be obstacles, especially if you're unmarried. This is a tearjerker, as by the end, her father is in hospice, his descent chronicled alongside the first moments of her motherhood. Henley's simple but powerful artwork serves as a complement to her story, one that may not be all that remarkable, but finds its power in the most basic human emotions, ones that speak to our need for family, the kind we are born into and the kind we create. There is a happy (mostly) ending, but there is still a trace of sadness, as the "shiniest jewel" she plucks from Russia means that her adopted son's family couldn't afford to care for him. The look she's given by his caretaker says volumes, and underscores the fact that none of this is an easy process for Henley, even if the ultimate outcome is one that brings her what she's been seeking. Even the very idea that a baby is a "shiny jewel" clamoring for someone's attention has a bittersweet twist, as Igor leaves the other children behind. That's not the focus of this story, but is still something Henley makes sure her readers are aware of, weaving happy and sad, life and death, until it can become hard to fully separate them.

Published by Thriftbooks.com User , 13 years ago
I've read this book twice and both times it made me laugh and brought tears to my eyes. Henley uses spare and telling line drawings to convey her story, diving into the hope, loss, joy, anxiety, frustration, and familial and romantic ties that layer this tale of loves gained and lost. Excellent storytelling -- rich and deceptively complex in this apparently straight-forward graphic narrative.

A jewel of a book

Published by Thriftbooks.com User , 14 years ago
I love this book. Marian Henley's drawings are so poetically spare, deft and masterful, and the story line is so compelling--the adoption of a child while losing a father--that I defy anyone not to read it in one sitting. I've always been a fan of Ms. Henley's work because of her commanding grasp of both the absurd and the sublime in life. She often mixes hilarity with poignancy in her work to illuminate her own very personal experiences. This takes great courage. And as deep as this book is, and as artfully constructed as it is, this tome is also a very FUN AND AMUSING read. THE SHINIEST JEWEL will give you many little jolts of pleasure and pathos through the unsentimental voice of its author. It sheds light on our wacky human condition, and on our one possible hope of redemption through the power of love. All written with great humor and heart. BUY THIS BOOK NOW!!! You'll cherish it.

Published by Thriftbooks.com User , 14 years ago
Shiniest Jewel is the heartwarming memoir of Marian Henley. Through her own drawings, Henley shares the story of adopting her beautiful son, William. 49-year-old Henley longed for a child. After much thought and contemplation, she applied for an international adoption. The agency made promises they could not keep. The hurry-up-and-wait atmosphere that goes along with adoptions causes anxiety and stress. Obstacles popped up. When Marian's father becomes ill, she spends time pondering their relationship. I see this as a book fraught with hope. When things seem bleak, there is always hope. The last few pages are heartwarming. Amidst sadness came the hope that can only be brought by a child. I love this book. It is heartwarming and unique. Marian Henley uses her own unique talent to express her inner thoughts and emotions. Marian Henley is the extremely talented creator of Maxine (my favorite cartoon.) I'm already thinking of friends that would enjoy this book. It is an honor to recommend The Shiniest Jewel.
Trustpilot
Copyright © 2022 Thriftbooks.com Terms of Use | Privacy Policy | Do Not Sell or Share My Personal Information | Accessibility Statement
ThriftBooks® and the ThriftBooks® logo are registered trademarks of Thrift Books Global, LLC