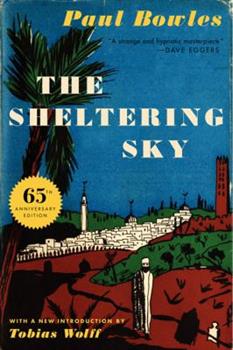 A landmark of twentieth-century literature. Paul Bowles examines the ways in which Americans' incomprehension of alien cultures leads to the ultimate destruction of those cultures. A story about three American travelers adrift in the cities and deserts of North Africa after World War II, The Sheltering Sky explores the limits of humanity when it touches the unfathomable emptiness and impassive cruelty of the desert.

Published by Thriftbooks.com User , 22 years ago
In Paul Bowles' The Sheltering Sky, three still-young Americans travel to the post WWII North African desert in search of themselves and new experiences. Port and Kit Moresby, in the tenth year of marriage, have become both sexually and emotionally estranged, and Port hopes their sojourn into the desert will bring them closer together and restore the love they once shared. Kit, not so keen on either the desert or Port, has nevertheless agreed to Port's wishes, albeit reluctantly. The third person in their party, their friend, George Tunner, accompanies them more on a whim than anything else.Seeking the exotic, the trio really doesn't know what to do with it when they find it. The sun is too bright, the labyrinth of city streets too dark, the excess of sensual delights a surfeit that imprisons rather than frees.Becoming more and more dissatisfied with both themselves and with those around them, they decide to leave the restrictiveness of the city behind and venture farther south, into the wild, harsh, dazzling beauty of the Sahara. They meet the Lyles, ostensibly mother and son, who claim to be writing a travel book but whose real business appears to be far more sinister, much like the duo's own obsessive Freudian tangles.Port, who at first, found himself drawn inexorably to the beauty and remoteness of the Sahara, soon becomes violently ill and dies, and Kit, grateful to be rescued by a passing, enigmatic Arab, finds that things are not always as they seem. Her rescuer becomes her imprisoner, and as the sun grows ever brighter, the shadows grow deeper. The bizarre eventually becomes so real that Kit gradually and terrifyingly loses what fragile grip on reality she once possessed.Although The Sheltering Sky may, on the surface, seem like a lurid and melodramatic tale, it is anything but. A masterpiece of understatement, plot is always secondary to theme in Bowles' writing; the real changes take place in the minds of the characters who must face an immensity of experience they cannot even hope to understand much less prepare themselves for.The indifference of nature and the unforgiving quality of the desert also play a huge part in this story. The book could be a metaphor for the meaninglessness of most 20th century relationships. Port and Kit's journey into the heart of the Sahara mirrors our own journey into the depths of the soul and we either come back altered forever (Kit) or we don't come back at all (Port). It is significant that Tunner, more superficial in both his outlook and psychological makeup, fails to make the journey into the depths of the desert and, as such, he remains untouched by it. He emerges essentially the same as he was when the story began.The Sheltering Sky could have been a character study, but Bowles wisely eschews this venue. Although we gain flashes of insight into each character, we really don't get to know them in-depth. An existential novel, the characters in The S

Published by Thriftbooks.com User , 22 years ago
The Sheltering Sky is a book that has everything--passion, love, disillusionment, pathos--you name and it's there. I hate to use the word, "masterpiece," but in this case, it applies. Bowles has done a perfect job in showing us the psychological depths of people who are deeply in love, yet lose their connections to and need for each other. The power of their plight is only reinforced by the unrelenting bleakness of the vast Sahara. It is a dark and often depressing book but one that is more than satisfying and memorable.

Dreams on a road to ruin

Published by Thriftbooks.com User , 22 years ago
For Kerouac and the Beats, frenetic, directionless travel was proof of life - could even be held to "create" life. Bowles, in this slyly subversive book, reverses that. The three Americans who start out on this largely pointless journey into the North African desert, hope the mere fact of movement will resolve their deep spiritual lethargy - or at least delay their having to face it. They imagine themselves sophisticated, wearing their cynicism as a talisman in a cultural landscape of troubling strangeness. But they are simply unaware. Faced with an elemental vastness that cares nothing for their conceits, they dis-integrate. Only one survives and she is so utterly changed - physically and in spirit - that she can no longer recognise herself, nor see a future for herself in the world she formally inhabited. Although the prime characters are fundamentally unpleasant - at least for most of the book - the lasting impression is of an eerie, spectral beauty. It is a quiet masterpiece; I know of few books that are more subtly teasing - that more wisely poke at our arrogance in imagining that we know anything.

A Book to be Traveled through

Published by Thriftbooks.com User , 23 years ago
With the death of Paul Bowles the world has lost one of its great authors. This book allows us to hold on to some of that greatness. As a rumination on the existential impact of place and space, the book opens up horizons of thought one may have never considered. When Port tells Kit his thoughts on the 'sheltering sky' one is asked to consider the implications of realizing - always and ceaselessly knowing - that the "sky" is a fiction that protects us from our very insignificance. In one short passage, Bowles has ripped the lid off our world as surely as he casts Kit into the desert, another grain of sand among countless others. This book is about more than an encounter with the Sahara, it is about - and is itself - an encounter with human existence.

Published by Thriftbooks.com User , 25 years ago
Paul Bowles' classic novel of the Sahara, "The Sheltering Sky", is perhaps the closest to perfect a book can attain. The characters are absolutely real, and Bowles digs so deep into the American psyche with them the effect is, at times, horrifying. In this book of three American travelers who journey through North Africa, Bowles shows us, with gripping yet subtle tones, how rigid is our comprehension of foreign culture, and how incomplete is our knowledge of ourselves. It is a novel for the mind. As the journeyers separate, first from each other then from their own sanity, we undestand how delicate our grip on reality is, especially when faced with the awesome spectacle of untouched nature. As dialogue and plot imperceptibly give way to long, lush interior landscapes, Bowles charts a course to the heart of human evil for us, much as Conrad did in "Heart of Darkness", but this time with more depth and more passion. There is no mistaking this book or a potboiler, and it is not an easy read, but once begun it is not easily ended, even when the last page is read. It echoes. It will echo one hundred years from now. Pick it up and begin a journey into yourself you will never forget
Trustpilot
Copyright © 2022 Thriftbooks.com Terms of Use | Privacy Policy | Do Not Sell or Share My Personal Information | Accessibility Statement
ThriftBooks® and the ThriftBooks® logo are registered trademarks of Thrift Books Global, LLC