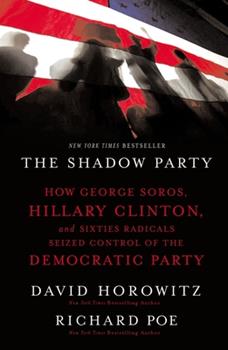 by David Horowitz and Richard Poe

America is under attack. Its institutions and values are under daily assault. But the principal culprits are not foreign terrorists. They are influential and powerful Americans secretly stirring up disunion and disloyalty in the shifting shadows of the Democratic Party.Radical infiltrators have been quietly transforming America's societal, cultural, and political institutions for more than a generation. Now, backed by George Soros, they are ready...

Published by Thriftbooks.com User , 14 years ago
This is a very interesting book which informs the reader about the current Democrat Party from someone who really knows what he is talking about. David Horowitz was part of the Radical Left, in the 60's, so he knows Radical Liberals when he encounters them, and Horowitz tells us that the Radical Left has found a new home in the Democrat Party. This book is an education in itself. A great read.

Published by Thriftbooks.com User , 14 years ago
Great book, well documented. Soros's network is like Kudzu, looks benign from a distance but it slowly covers and chokes the life out of you.

Published by Thriftbooks.com User , 15 years ago
This is a must read for everyone....but particularly Democrats who are not aware of the change in their party. It is not the party of your father.

Blueprint for Democrats: Deceive and Conquer.

Published by Thriftbooks.com User , 16 years ago
To condemn as false the entirety of the left's attacks on their opponents, the past, our culture, and capitalism is to somewhat overstate the case as, amid the sweltering cauldron of fabrication which so often is their argumentation, a few gray areas exist wherein the rhetoric is more true than false. Perhaps the best example of one such area is in the conservative habit of refuting their claims while denying that we think they're unpatriotic. The fact is, nearly all of us realize they are unpatriotic because they hate their homeland and cheer for it to fail in every endeavor. That we systematically deny this understanding is due to varying reasons. In the case of this reviewer, it stems from a libertarian aversion to censorship which is a topic which must come up after labeling certain positions as sedition. Therefore, to preserve the marketplace of ideas for everyone (or what political correctness has left us of this marketplace), it is often best not to call a traitor a traitor. Eminent conservative theorist David Horowitz and co-author Richard Poe have no such qualms about stating the obvious, and aggressively do so in their recent release, The Shadow Party: How George Soros, Hillary Clinton, and Sixties Radicals Seized Control of the Democratic Party. The text examines the relationship between a queen, a queenmaker, and a legion of fanatical pages and squires. For those readers familiar with his oeuvre, they will undoubtedly agree that Horowitz delivers here his usual survey of history, biography, and political commentary along with the type of powerful analysis rarely offered by his peers. Their subject is both grim and all-encompassing. The book's central theme is that an unwritten partnership exists between George Soros, whom the authors dub the Lenin of the Shadow Party, and Hillary Rodham Clinton. The two of them are the heroes and apex, the Cesare Borgia's if you will, of those elites who foment revolution from above while the grassroots radicals they finance destabilize the nation from below. Their goal is to bring about an "orderly revolution" through which Mrs. Clinton, their Trojan Horse, will be legally elected and bring about a severe deconstruction and reconstruction of the nation. They believe that what cannot be accomplished by her hand will be enacted by the courts who began treating the Constitution as a fuzzy concept decades ago. George "Lenin" Soros is an uber-tycoon and legend of the financial world who, unfortunately for us all, turned his attention to politics in later life. His views were formed and inspired by his former teacher Karl Popper, whose notion of an "Open Society" remains on his lips today, and is the name he chose for his foremost institute and foundation. The Open Society is essentially one wherein none of the leaders believe in eternal truths and where the politicians and populace do not regard themselves as being superior to the citizens of any other nation. That the United States is no such plac

Read this book -- your freedom may depend upon it!

Published by Thriftbooks.com User , 16 years ago
David Horowitz and Richard Poe have written a work of major importance -- revealing the plans of the radical Left to re-write the Constitution in their image, and bring about the Socialist "Utopia" of their dreams, which were unchanged, and unchastened, by the fall of the Soviet Empire. Please read this book with an open, seeking mind, and check out their assertions for yourself -- don't let partisanship blind you!
Trustpilot
Copyright © 2022 Thriftbooks.com Terms of Use | Privacy Policy | Do Not Sell My Personal Information | Cookie Preferences | Accessibility Statement
ThriftBooks® and the ThriftBooks® logo are registered trademarks of Thrift Books Global, LLC