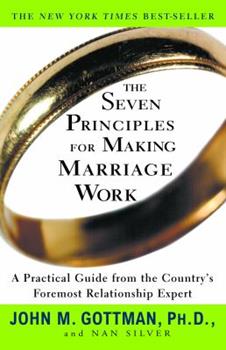 The Seven Principles for Making Marriage Work: A Practical Guide from the Country's Foremost Relationship Expert

John Gottman has revolutionized the study of marriage by using rigorous scientific procedures to observe the habits of married couples in unprecedented detail over many years. Here is the culmination of his life's work: the seven principles that guide couples on the path toward a harmonious and long-lasting relationship. Packed with practical questionnaires and exercises, The Seven Principles for Making Marriage Work is the definitive guide for anyone...

Everyone should read this

Published by Brittany T , 3 months ago
Outstanding book. Easy to read, engaging, and an excellent resource. My partner and I are having relationship issues and this is a wonderful method for people who need to try something new. The “validating other people’s emotions by repeating what they said” method didn’t work for us. This did. Highly recommend.

Filled with tools my wife & I use to strengthen our marriage

Published by Thriftbooks.com User , 18 years ago
As a relationship and romance author, speaker, and coach I read a lot of books about dating, marriage, and romance. "Seven Principles for Making Marriage Work" is one of my top 10 favorites. The seven principles identified through Gottman's research are powerful and when coupled with the exercises that are included you get practical tools to strengthen your marriage.The first two chapters give you an insight into where the book is coming from. The information gleened from the Seattle Love Lab gives you hope for a successful marriage and identifies key warning signs for trouble in your relationship.The next seven chapters cover the principles in depth with skill building exercises to enhance your proficiency in each area. First is building a foundation with "Love Maps." Next is developing a compassion and caring with "Fondness and Admiration." Chapter 5 focuses on creating an intimate relationship by looking to your partner for help, support, and answers. Giving a higher value and priority to your partner follows allowing you to be influenced by them. The next three chapters cover problems in the marriage and how to handle them. Work, money, in-laws, [physical attraction], housework, and a new baby are the big six areas of conflict. Some problems are solvable and some not. How you handle the conflict is key. Next the book covers"Overcoming Gridlock" or creating a dialogue and point of acceptance for unsolvable problems. The final chapter is really about creating a shared vision for the marriage and the future of it.The benefits of marriage are well documented; longer life, more money, healthier children, and better [physical activity]. "Seven Principles for Making Marriage Work" gives you a practical guide for achieving those benefits, and more!

Seriously consider "7" before all other books on this topic!

Published by Thriftbooks.com User , 21 years ago
A very reasonable as well as scientific approach to marriage. Many marriage-oriented books offer logical short-term band-aids (e.g., focusing on perceived Mars/Venus gender differences, communicating better, smoothing over conflicts) that make for a provocative read and/or admirable goals, but by and large fail in the long-run to resuscitate shaky marriages. Gottman creates a path for marital success via theories and exercises with an established track record for success. Many people wouldn't think that a fit marriage has to be exercised regularly, no less than one's body through regular workouts. Gottman's book serves as the ultimate guide to marital fitness, yet is a valuable read even if you are unmarried or have already experienced a failed marriage. Good marriages don't necessarily have less conflicts than bad ones. Gottman gets under the surface and digs into such deeper issues as the maintaining of HONOR and RESPECT for your partner in the heat of all-too-common battles. Along the way he punches holes in a lot of marriage-counseling paradigms. In short, this book can improve a good marriage (or any similiar commitment between two people), heal a salvagable one, or explain why a bad one got to or beyond the point of no return. Or even serve as a form of CRUCIAL pre-marital counseling.My question, why isn't there a mandatory course in marriage at the high school level that incorporates Gottman's research? Wouldn't the knowledge gained be of as much or more importance than any other accumulated as teenagers head into adulthood? I consider topics such as those raised by Gottman to be of enormous value for my daughters to read (and discuss!) when they reach their mid-teens...better too early than too late!

Finally, something that works! Saved our 27 yr. marriage

Published by Thriftbooks.com User , 22 years ago
The book is based upon scientific research, not oppinion. A VERY positive book. It gave us real hope. Not just another 'feel good' pop-psych book. It takes you inside the conflicts of real couples, and reveals the four marriage-killers, and the seven, very do-able skills to aquire to make a marriage work. I've read a lot of books trying to save my marriage. Some of them had some good things that truely helped. But it wasn't enough help. It never got to the root of the problem, and it left us both feeling like 'we have to completely change ourselves if we want to stay married'. Following the principles outlined in this book is FAR easier and FAR more effective than most other books I've read.
Copyright © 2020 Thriftbooks.com Terms of Use | Privacy Policy | Do Not Sell My Personal Information | Accessibility Statement
ThriftBooks® and the ThriftBooks® logo are registered trademarks of Thrift Books Global, LLC