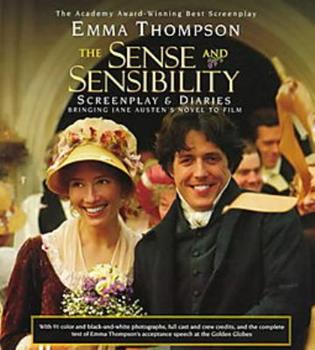 Published by Thriftbooks.com User , 12 years ago
A screenplay is a screenplay as far as post-release documentation goes. But the additional random notes in this version are worth the extra fiver. Every bit "The Diary of Eve" and perhaps even more so for the anthropology, Thompson plays the dry Austin humor to the hilt - her own voice is apparently just as funny. Classic primer for period drama affectionados even with no interest in screenplays. Wickedly funny and warm at the same time, much like Austin. No accident.

Published by Thriftbooks.com User , 20 years ago
If you read Jane Austen's "Sense and Sensibility" before or after seeing the 1996 film version then I think it is pretty easy to conclude that Emma Thompson's Oscar for Best Screenplay adaptation was richly deserved. After writing and performing a series of short skits for British television, Thompson was approached by producer Lindsay Doran to write the screenplay. Thompson began by dramatizing every scene in the novel, which resulted in 300 hand written pages to be followed by 14 drafts as the 1811 novel was crafted into the final script. The result was a script that manages to be not only romantic and funny, but also romantic and funny in the best Austen sense of both words.Be aware that this is the Original Script, not to be confused with the Shooting Script. This should be clear as soon as you beginning reading, because originally Thompson had the scene shifting back and forth between Mrs. Dashwood and Elinor/John and Fanny Dashwood (credit for this revision must go, I believe, to Film Editor Tim Squyres, who recut the scene so that we get all of one side and then the other instead of alternating back and forth as in the original script). Overall the strengths of Thompson's script are in two main directions. First, she manages to convey the scope of the novel in a two-hour screenplay, no mean task. Second, the little details she adds to Austen's story are simply marvelous. For example, her use of Shakespeare's Sonnet 116 ("Let me not the marriage of true minds"), which Marianne and Willoughby share to their great mutual delight and which Marianne repeats standing in the rain looking at Willoughby's new estate. In fact, Thompson revised the first scene to make it even better, having Willoughby misquote a key word in an elegant bit of foreshadowing. Thompson also makes one nice little change at the end. While Austen has Elinor bolt from the room to cry outside during the happy ending. Thompson creates a wonderful moment by having her stay in the room and having the rest of her family flee. There are not too many scenes where you are crying and laughing at the same time, but Thompson certainly created one (and has the added virtue of relying on herself as an actress to nail the performance as well). All of these are marvelous examples of playing to the strength of the cinema to bring Austen's novel to the screen.But we get much more than just the screenplay in this volume, because Thompson includes excerpts from her diaries kept during both the writing of the screenplay and the actual production of the film. It would be nice if there was more insight into what she was thinking when writing the screenplay as I am always interested in how decisions were made and where inspiration comes from, but Thompson makes up for that with her little tales of working with director Ang Lee and the rest of the cast in making the film. Finally, in the Appendices, there is a very choice little treat, namely Imogen Stubbs' Prize-Winning Letter, writ

A look inside the making of the film

Published by Thriftbooks.com User , 21 years ago
Most for-sale screenplays are just that -- screenplays. Emma Thompson, who wrote the screenplay for the delightful Jane Austen film "Sense and Sensibility," chose to include journal entries throughout the filming of the movie as well, in addition to the winning entry of a contest to see who could write the best letter from Fanny to Elinor.There is wit in the descriptions and the photos, all well-captured. The journal entries are entertaining and a good look into the making of a movie. Although be forewarned -- because they dress like the characters of S & S, they do not talk like them. There is definitely some verbal crudeness in the book, men and women alike, but if you can overlook that (or are used to it) then this book will be a delightful read for any Jane Austen fan.

A fascinating look at a remarkable film.

Published by Thriftbooks.com User , 21 years ago
There are three separate parts to this fine volume; introduction, script and diaries. The producer of the film, Lindsay Doran, opens the door for us with her wonderful introduction. At age 13, she was determined that not only was "Jane Austen a very stupid writer," but also she would "never, never read one of her stupid books again."Fortunately for the rest of the world, Ms. Doran changed her mind, and some twenty-five years after that first erroneous conclusion, has brought us this wonderfully witty, and extremely faithful film version of this first novel by Austen. As producer of the Kenneth Branagh/Emma Thompson film, DEAD AGAIN, she became acquainted with the woman who was not only a phenomenal actress, but also a gifted writer-one with a sense of humor and a strong romantic bent. These two qualities had proven to be the stumbling block over nearly ten years of searching for the right scriptwriter for Sense and Sensibility.It took nearly seven years to come up with something close to a shooting script, sandwiched as it had to be between Thompson's many award-winning acting chores. Serendipity was obviously at work, however, and eventually, a budget was established, and casting accomplished. Many of the actors Emma had envisioned in various roles had participated in a read-through the year prior to the filming; they were all in the film, in those same roles.While the Dashwood ladies are all suitable beautiful, it is the men who are truly gorgeous. ("Repellently so," writes Ms. Thompson in the diary portion, referring to Hugh Grant. "He's much prettier than I am.") With his look-alike Richard Lumsden, they are the brothers Ferrar, Edward and Richard, with Greg Wise as the fickle Willoughby. Alan Rickman (be still my heart!) brings maturity and virility to the role of Colonel Brandon. The sets and costumes are sumptuous.Interspersed with the actual shooting script and the diaries are some 50 photographs, 36 of them in luscious color. One script looks pretty much like another, but this one allows Ms. Thompson's wry wit to shine, especially in some of the non-spoken words. Of course, not every scene from the book could be included; the movie would have been more than six hours had they been. But the essentials are here, along with all the major characters. Providing testimony to just how perspicacious was the choice of writer is the number of awards garnered by Thompson for this, her first film script. The diaries portion begin with a production meeting on January 15, 1995 and continue through July 9 of that year. A very small mention is made of Hugh Grant's visit to California, where he'd gone for his next film project after the completion of filming his scenes in England. A final two pages describes the 'location' houses chosen to represent those lived in by the families in the novel.It may come as somewhat of a surprise to some readers to discover rather explicit language in the diaries. In addition t

Lush companion to the film

Published by Thriftbooks.com User , 24 years ago
If you liked the film of _Sense and Sensibility,_ you'll probably love this book. It's profusely illustrated with black-and-white pictures of both scenes from the movie and off-camera, and has two lush sets of color plates (which don't look quite right in the paperbck version, but which do communicate the beautiful cinematography of the film). This book inclues the shooting screenplay, heavily edited so neophytes can read it without confusion, an introduction by the film's producer, and, most notably, a series of diaries by Emma Thompson during the shooting. While the entries are usually quite brief, they provide a small but revealing windows onto the process of moviemaking, often quite a contrast to the seamless product seen on-screen. Disappointingly, they're not very detailed about the screenwriting process itself, nor about the five-year-long struggle Thompson endured to write the screenplay (when she began it she was a little-known actress and the two leading parts were originally written with real-life sisters Natasha and Joely Richardson in mind, but this detail is nowhere mentioned in the book). Those interested in personal details will be frustrated: although Thompson reportedly began dating Greg Wise, who played Willoughby, during the shooting, it's not mentioned. But there are remarkable insights into Jane Austen, the film, and the process of moviemaking itself, and the diaires help explain how Thompson managed to create such a faithful but lively adaptation of Jane Austen's novel. Thompson's bawdy English wit is also brilliantly displayed. This is a welcome look into the mind of a fascinating, articulate, intelligent actress, and a fascinating behind-the-scenes look at an already-beloved movie. Highly recommended
Copyright © 2020 Thriftbooks.com Terms of Use | Privacy Policy | Do Not Sell My Personal Information | Accessibility Statement
ThriftBooks® and the ThriftBooks® logo are registered trademarks of Thrift Books Global, LLC