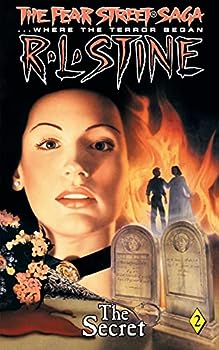 (Book #2 in the The Fear Street Saga Trilogy Series)

This description may be from another edition of this product. In the second novel of a terrifying trilogy, R.L. Stine takes you back in time, finally telling the awful truth of what happened to the cursed Fear family...and why their evil lives on. Simon Fier...

A very Frighting Story! Keeps You On The Edge!

Published by Thriftbooks.com User , 21 years ago
After years of searching Ezra Fier beleaves he has found the Goodes in the village of Wicham. Only the Goodes are not there anymore. As for the rest of the people... DEAD! The Fiers move ino the Goodes old home-in Wicham-hoping they will return. Young Abigail Fier befriends a young girl who kills her! She was the ghost of Hester Goode. By marrying Delilah Goode/Wilson. Jonathan Fier thinks he can end the curse. But at the wedding Delilah is shot and killed! Jonathan buries the amulet along with his father and the curse. It stays buried for 100 years! But Elizabeth Fier finds the "pretty necklace" and unleashes the evil once agian. Franklin Goode kills Elizabeths sister Kate and tells Elizabeth it was suicide. Her brother Simon kills Frank before he kills Elizabeth. To escape the curse he changes the family name from Fier to Fear. And that is only the begining....

Published by Thriftbooks.com User , 21 years ago
I thought that The Secret by R.L. Stine was great! And I'm glad that Jonathan managed to keep the amulet buried for 100 years until his great grandaughter found it and unleashed the evil . And the part where Hester chants "Abigail came to my house" was scary and a little weird. P.S. FOr some people who heard that the Raven woman didn't come out, it did. If you don't believe me check Borders.com and type in Fear street sagas and there you'll see the Raven WOman Fear street saga #17. Thank you

One of the best Fear Street books ever!

Published by Thriftbooks.com User , 21 years ago
I felt that this book was one of the best out of all the Fear Street books! I found it was gross when Ezra Fier and his family went back to Wickham to find nothing but a few ageing neighbours and lots and of rotting corpses. But than it quickly goes to frightening when the ghost of Hester Godde takes Ezra's daughter Abigal to the grave and Hester's ghostly whisper ring's through the air "Can Abigal come to my house?" which swiches to a gleeful chant of "Abigal came to my house!". Well all in all this was a great book and I look forward to reading "The Burning"! ~Justine

Published by Thriftbooks.com User , 22 years ago
The Fear Street Saga: The Seceret was okay. I mean I like it was good to read. In this one all Ezra Fier is thinking is revenge. He hasn't thought about nothing else. This revenge dstroys his family and him in the process, too. He can't get nothing done day and night, but reminded how the Goodes turned on him, and he has it all wrong, too. Instead of bury something that could end at his request he wants to start all the hatred and horror again, and he really doesn't have nothing to avenge, but his son Jonathan learns a lesson though. He learns to bury the evilness because he has lost the one's he loves, and his father had lost his life because of a cause that was worhtless to his family, and to him, too if he realized it.The best part I like is when Frank Goode tried to get his avengence. He was foolish, too, because all he wanted to do was killed the whole Fier family that he thought caused a plaque! Elizabeth and Kate were fools to fall in his trap like that. He played both sister at the same time. Simon was the hero as he rescused himself and his siter from crazy Frank. I deeply enjoyed some parts of the book!
Copyright © 2020 Thriftbooks.com Terms of Use | Privacy Policy | Do Not Sell My Personal Information | Accessibility Statement
ThriftBooks® and the ThriftBooks® logo are registered trademarks of Thrift Books Global, LLC