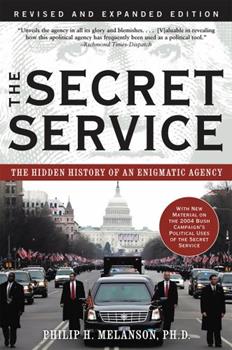 The Secret Service: The Hidden History of an Enigmatic Agency (Revised)

This new edition of the definitive history of the Secret Service lays bare the 2004 Bush campaign's political uses of the agency and the new challenges it faces as a branch of the Homeland Security Department, in a post-9/11 world. Acclaimed scholar of political violence and governmental secrecy Philip Melanson explores the long-hidden workings of the Secret Service since its inception in 1865 and through rigorous research and extensive interviews...

The Secret Service: The Hidden History of an Engimatic Agency

Published by Thriftbooks.com User , 14 years ago
An excellent look at the history and daily workings and responsibilities of the U.S. Secret Service. Easy reading, interesting to the point where I did not want to put the book down. The author is to be commended for a first class book that goes behind the scenes and enlightens the average citizen about an agency that is so vital to national security but gets little recognition or appreciation. George T. Miller, Jr. (Edison, N.J., U.S.A.).

The leading authority on the U.S. Secret Service approves :)

Published by Thriftbooks.com User , 14 years ago
Minor criticisms aside (as duly noted by a few others), this is an excellent work on the U.S. Secret Service (Melanson took my advice---for the most part---after I gave him a pretty negative review to his original 1984 work entitled "The Politics of Protection"; this book acts as an updated version in many ways). As I am the leading authority on the U.S. Secret Service (esp. in regard to the period from FDR to Reagan, with special emphasis on the JFK years), I know of what I am talking about...and Prof. Melanson deserves a big round of applause for putting out a very readable and exciting overview of the Secret Service from the 19th century to the present. In addition, as I am on 8 pages [pages 74, 77, 80, 87, 343-344 (endnotes), 358 (bibliography), & 371 (index) ["etc."], I think I should be grateful, too---he makes good use of my material and gives a nice overview regarding the gross negligence in Dallas on 11/22/63 (he doesn't go as far as he could of, but I digress). Buy it!

Published by Thriftbooks.com User , 16 years ago
As a proud former member of the United States Secret Service, I believe that this product is worth your time and money...and I also feel it is my perogative to inform everyone here that, while Vince Palamara is to be commended for his notable research acumen and getting many of my colleagues-and myself- to speak to him, he has also done so at the expense of many of their feelings, beliefs, and trust. In short, Vince Palamara believes the means justifies the ends. So, imagine my horror when I turn on the television a few years back and I SEE the young researcher who promised myself and many others that he was not a journalist, stating facts, theories, and innuendo as the gospel truth. Emory Roberts, for one, cannot defend himself. I will concede that I have no good explanation for what transpires on the film Palamara shows-but does that have to lead to conspiratorial conclusions? Does it, Vince? From what I gather, many members of the AFAUSSS, myself included, are quite upset with him, as well they should be. Can we let sleeping dogs lie? Lee Harvy Oswald killed President John Kennedy, acting alone. Yes, my colleagues did not do their jobs as effectively as they could have or probably should have-but will that bring back the man? No. What useful purpose is served by defaming Kennedy's memory and all the still-living former agents with calling into question the very painful loss of said man, as well as their job performance. Put that in your pipe and smoke it. T.R., proud alumni/ past member of the folowing organizations: MSU Army 1957-1959 USSS 1961-1982

Published by Thriftbooks.com User , 18 years ago
This is a good account of the secret service and their job function. It provides a comprehensive history of the agencyfrom its inception to present. It's also a good account of hownot to spell because there are numerous spelling mistakes and editorial mistakes that shouldn't have been overlooked.

Published by Thriftbooks.com User , 19 years ago
This book is a fascinating look at the Secret Service - one of the most visible government agencies but (I now know) one of the least understood. It's a really easy read, with lots of colorful anecdotes about the agency, its history and the job of being a secret service agent. The topic is timely (i.e. in the post-9/11 era and with the creation of the Dept. of Homeland Security) and Melanson seems to have done a tremendous amount of original research. A wonderful book.
Trustpilot
Copyright © 2022 Thriftbooks.com Terms of Use | Privacy Policy | Do Not Sell or Share My Personal Information | Accessibility Statement
ThriftBooks® and the ThriftBooks® logo are registered trademarks of Thrift Books Global, LLC