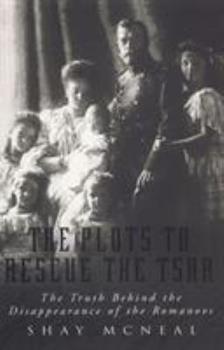 The Plots to Rescue the Czar

A reappraisal of one of the most memorable events of 20th-century history. Using such sources as recently declassified intelligence files and new scientific analysis, the author examines the disappearance of the Russian imperial family in 1917, challenging the accepted theories of their fate.

DNA evidence has been discredited

Published by Thriftbooks.com User , 15 years ago
I have read this book and numerous others on the subject. Unfortunately most of the reviews below were written before Stanford University and the Japanese government independently discredited the DNA evidence in late 2004. There is now no physical evidence of an execution but there is a great deal of evidence for a rescue. I applaud Shay McNeal for her diligent research. She has opened my eyes and I hope many others.

Published by Thriftbooks.com User , 18 years ago
When I first became interested in the Romanovs I knew very little about Russian history so the context was difficult for me. Some suggested I read the standard books that are the usual recommendations. Then one of my professors suggested I read The Secret Plot to Save the Tsar so that I could put the events leading up to the final days of the Tsar and his families' lives in Siberia into context. I am so glad I did, For anyone really interested in what was going on in Russia in 1918 this is absolutely a book you will not be able to put down. While McNeal's first book attempts to walk between an exciting read and an academic exercise, I never felt betrayed on either level. It was worth investing my time.

What an absolutely enthralling book.

Published by Thriftbooks.com User , 19 years ago
I almost did not order this book when I saw a few people had given it a 1 star rating. However I also realized that more than a few had rated it with 5 stars so I carried on. Now I'm so happy I did.McNeal has done a masterful job of researching as well as undertaking the complex challenge of sorting out layered intelligence operations that were launched by various heretofore unknown individuals and countries. If you did not know the history of Northern Russia in the time of Nicholas' abdication you will have a better grasp after reading her book.Moreover, both my husband and I found more than what we ever dreamed in reading her amazing account of the last days of the Czar, Czarina and their family. He - enough spy action to keep him engaged from page to page. Me - a more enlightened understanding of this tragic episode in Russian history. For those who maintain they could not follow the prose or were confused - perhaps I could suggest they were not very clear-minded in the very beginning.Much gratitude to Ms. McNeal for her tremendous effort. This book should have a very long life.

At the very least, it give hope

Published by Thriftbooks.com User , 19 years ago
This books leaves you with a very strange feeling at the end. McNeal gives you just enough evidence to maybe doubt DNA findings, and there are just enough coincidences to allow you to consider the fact that the Romanov family escaped. Overall, she doesn't argue from solid evidence, but rather the lack thereof. Overall, a very interesting book, that may or may not be validated with the uncovering of new information.

Best book on the subject in a generation, possibly ever

Published by Thriftbooks.com User , 19 years ago
This volume is absolutely a DON'T MISS for anyone even remotely interested in the captivating mystery surrounding the last Imperial Romanovs. History owes a huge debt to Shay McNeal for her efforts, and there is no doubt her book will be referred to by scholars and hobbyists for many years to come.Carefully crafted, meticulously researched, McNeal has revealed a treasure-trove of new information regarding this case. The compelling newly-discovered evidence blows the 80-year- old "status quo" version straight out of the infamous Ipatiev "cellar." New hobbyists and Romanov enthusiasts will benefit enormously from this book as well, as it is eminently readable, yet also gives the fine details the lifelong Romanov-maniac demands.This book is very important for several reasons: 1. The author dares to question what has to now been considered "set in stone" and backs up her theories every step of the way, 2. It sheds light on the fact that the famous DNA tests were and remain problematic, 3. For all intent and purposes the author proves the "Yurovsky note" is a ... and 4. McNeal is the only author since Summers and Mangold's "File on the Tsar" bold enough and bright enough to think outside the box. It is extremely refreshing to encounter an author who not only refuses to leave the family necessarily in the cellar, but goes to great lengths with her research to prove her points.Anyone who has ever pondered the obvious missing pieces of this story simply must read this book. It doesn't solve the mystery, but it definitely points in the right direction, something the Romanov family has deserved for a very long time.If you're not already caught up in this famous story, "The Secret Plot to Save the Czar" will have you hook, line and sinker! Having now read Shay McNeal's book, I have only one question for the author...when is Part Two going to be available?
Trustpilot
Copyright © 2022 Thriftbooks.com Terms of Use | Privacy Policy | Do Not Sell My Personal Information | Accessibility Statement
ThriftBooks® and the ThriftBooks® logo are registered trademarks of Thrift Books Global, LLC