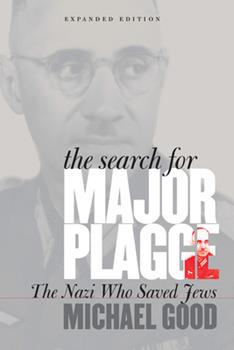 The Search for Major Plagge: The Nazi Who Saved Jews, Expanded Edition

When The Search for Major Plagge was published last spring, the world finally learned about a unique hero--and about one American doctor's extraordinary journey to tell Karl Plagge's story.Part detective story, part personal quest, Michael Good's book is the story of the German commander of a Lithuanian work camp who saved hundreds of Jewish lives in the Vilna ghetto --including the life of Good's mother, Pearl. Who was this enigmatic officer Pearl...

Deeply Moving Book Of The Triumph Of Good Against Evil

Published by Thriftbooks.com User , 17 years ago
There is so much evil when Governments attack their own people as has happened throughout history. The Nazi Government in Germany was especially evil as it attacked many millions of its own people and neighboring peoples. The Nazi Government which was, as is always the case in evil governments, run by a relatively few number of people with awesome power, was on a murderous rampage in Europe. A very few courageous people stood up in opposition. One of these people is Major Plagge. It is thrilling to read of his courage, bravery and success. Everyone should read this book. Hopefully, then more persons could stand up against evil governments before its too late. Why is it that of all the species on the Earth that Man is the most evil? It is because of the accumulation of power in the hands of a few people. That is always a recipe for disaster.

Published by Thriftbooks.com User , 17 years ago
Michael Good's "The Search for Major Plagge" is a truly wonderful story, eye opening and inspiring. It begins with an American physician who dares to uncover his family's long deceased past and, in the exchange, unearths a German hero of the stature of an Oskar Schindler. Because Plagge bucked the Nazi-controlled system, 250 additional Jews survived the Holocaust. As Good remarks about World War II, "An examination of the war does not necessarily lead only to the bloody horrors that mankind is capable of; it can also point to the ultimate triumph of good over evil." Good's parents, William and Pearl Good, grew up around Vilnius, Lithuania. Soon after the invasion of Poland in September 1939, the Nazi war machine stormed in and by 1941, the systematic annihilation of Polish and other Jews in the region had begun. A loyal veteran of the Wehrmacht (German Army) who had fought in World War I, Karl Plagge saw the approaching war and its predictable consequences as early as the first months of 1939. With the launching of the Blitzkrieg and his drafting back into the Wehrmacht, Plagge made the gutsy move of quitting the Nazi party! Plagge dutifully served in the Second World War. This time, however, he worked behind the scenes to buck the Nazi juggernaut, to save Jews by employing as many as he could at his vehicle repair station. Considered productive, Plagge's employees were generally overlooked during purges by the SS. Plagge's heroism went largely unnoticed and might well have died with him in 1957 if not for Michael Good's persistence and the faded memories of a few of the survivors, including his mother Pearl. These efforts paid off and today, Karl Plagge is numbered with the "Righteous Among the Nations" at the Yad Vashem Holocaust Museum in Jerusalem. "The Search for Major Plagge" not only makes for good reading, but it also gives a poignant testimony about how one person striving against so powerful a social current can make so great a difference. Rev. Dennis J. Mercieri, alumnus of Holy Apostles Seminary

In Search of his Mother's Savior

Published by Thriftbooks.com User , 17 years ago
"The Search for Major Plagge" is the story of an American doctor coming to terms with his parent's Holocaust experience and unearthing the unlikely Holocaust hero that saved his Mother's life. It is a fascinating read both because of the emergence of Karl Plagge himself but also because of the people who form "the Plagge Research group". They are unique people from a retired German military man, a retired German archivist, the American doctor and several Holocaust survivors. With the help of aging memories, archives and the Internet the Group builds a case for Major Plagge joining the ranks of Yad Vashem. A case that transcends time and geography -- ultimately rewarding human decency and bravery. It's an inspiring read and a great book for young adults -- providing both a somewhat gentler introduction into the horrors of the Holocaust through the ever-sharpening focus of a modern research story.

Published by Thriftbooks.com User , 17 years ago
This exremely well written, readable book is a first for me ---I simply dont easily read books about the holocaust. To my great surprise, it was a page turner. Not only was I spellbound by the unravelling mystery of who Karl Plagge was but also was deeply moved by the stories of those he touched. What an impossible position to be in-- a Nazi who doesnt agree with the party line is a mighty fine tightrope walk. He had every reason not to let anyone know what he was about. It was also fascinating to ponder from a psychological viewpoint who would recognize his intent. This is a study of the human drama in the camps; Plagge's sparse, exacting words and simple acts take on huge and different proportions when visaged from the inside of a panic-filled so-called labor camp. This is the language of the heart. Told by Plagge with a poker face. Goods' question on "Who is a hero" has relevance for all time-- that those who are NOT in power can really make a difference. In my own life this fact helps me keep my eye on the ball-- doing what is morally right can go a long, long way.

A masterpiece of writing and moral significance.

Published by Thriftbooks.com User , 17 years ago
This well-written, gripping story about Major Plagge should be read by everyone, and studied in high schools and colleges. Surely one of the lessons of the horrible atrocities committed in so many places during the twentieth century is that the progress of the human race may depend more on learning moral fortitude than scientific or academic knowlege. Hitler, Stalin, and Pol Pot personally killed or tortured relatively few people. However, they accomplished unfathomable evil because so many "ordinary" people lacked the willingness to listen to their consciences and to resist their commands. All of us ordinary people need to study the lives of heroes like Major Plagge so that when we face life's frequent tests of moral courage, both small and large, we won't fail. We desperately need books like this. I strongly recommend it both for its wonderful style and moral importance.
Trustpilot
Copyright © 2022 Thriftbooks.com Terms of Use | Privacy Policy | Do Not Sell or Share My Personal Information | Accessibility Statement
ThriftBooks® and the ThriftBooks® logo are registered trademarks of Thrift Books Global, LLC