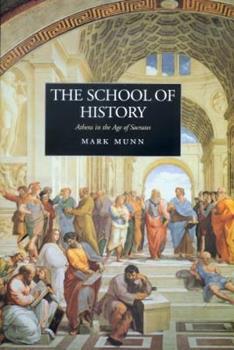 The School of History: Athens in the Age of Socrates

History, political philosophy, and constitutional law were born in Athens in the space of a single generation--the generation that lived through the Peloponnesian War (431-404 b.c.e.). This remarkable age produced such luminaries as Socrates, Herodotus, Thucydides, Sophocles, Euripides, Aristophanes, and the sophists, and set the stage for the education and early careers of Plato and Xenophon, among others. The School of History provides the fullest...

Published by Thriftbooks.com User , 14 years ago
Athens was a democracy (roughly in the sense of being a political community in which participation in political and military practice was open to the poor general populace) for about a century. In that century, that city produced many of the most impressive artistic and cultural products of our society--the tradedies of Aeschylus and Sophocles, the history of Herodotus, etc., etc.--and also developed a rich empire around the Aegean Sea. For the last third of a that time, Athens was in on-and-off war with Sparta and through this war the democracy was ultimately lost, and was replaced by an oppressive oligarchy. The democracy was subsequently restored, without the accompanying empire. Mark Munn's book is a masterful historical study of this period of war with Sparta, which offers a compelling interpretation of the period as a whole while revising our understanding of a number of important historical questions. Munn's analysis of the importance of Persian influence in the war and his interpretation of the role of Alcibiades are both provocative and original. His most original contributions, though, pertain to the theme of writing--specifically, the crucial role of the _nomothetai_ in interpreting and writing down the Athenian laws, and the particular light this larger Athenian project of establishing accurate and authoritative legal writings has for the interpretation of Thucydides' writing of his history of the Peloponnesian War. Munn shows the project of establishing authoritative written laws to be interwoven with the conflicting agendas within the differing oligarchic communities within Athens, and especially shows the political importance of the growing sense of historical accuracy that accompanies this. Thucydides' writing, Munn argues, was essentially a political brief on the eve of the Corinthian War that makes sense in light of this development in legal writing. _The School of History_ is a persuasive and engaging book, and should be standard reading for all historians, classicists and philosophers working with ancient Greece. It is destined, I am sure, to transform our understanding of Thucydides, and of Athenian democratic culture in general.

Published by Thriftbooks.com User , 20 years ago
Declared as an attempt by the author to understand the work of Thucydides, this history of the world of democratic Athens in the generation after Pericles is a low key yet gripping account of the maelstrom into which this great seminal era of political evolution passed. The great detail of the account matches both the magnificence and yet the somber context of the reality behind the usual glorified summary accounts of the world's first brief experience of true direct democracy, whose actual facts are at certain points almost an alarming eye-opener, from the immediate collision of class struggle in almost canonical form to the duress of empire, and the outcome of civil war. The work of Aristophanes, and its direct echoes of this period, especially stands out better understood in this blow by blow, as does the ambiguous division of history just here, with respect to its democratic ideals and its first dissenter, Socrates. The work brings home a claim to the solution of the mystery of Thycidides composition, that the rise of note-taking in this era vindicates the relative accuracy of the speeches long thought to be imaginative recreations. It is a strange account, rendered eerie in the author's meticulous drumbeat march through the labyrinth of recovered details.

Athenians Learn a Crucial Lesson from their Own History

Published by Thriftbooks.com User , 20 years ago
Mark Munn has written a superb study of late fifth-century Athens focusing especially on the protracted struggle between the democrats and the oligarchs, and the effect which Thucydides' HISTORY OF THE PELOPONNESIAN WAR had on those men involved in that struggle. What is new and unique here is the importance Munn assigns to the role of history and memory in Athenian society. He shows how the Athenians' view of their past colored and shaped their political struggles. The Athenians were probably more sensitive to religious and political scandal in their own time than we are in ours. Munn writes in a very engaging style-especially in his account of the controversy surrounding Alcibiades. At last we have an answer to the question: When did Thucydides write his HISTORY, and why he left it unfinished. The SCHOOL OF HISTORY is a must read for anyone interested in Athens, Thucydides, or Alcibiades!
Copyright © 2020 Thriftbooks.com Terms of Use | Privacy Policy | Do Not Sell My Personal Information | Accessibility Statement
ThriftBooks® and the ThriftBooks® logo are registered trademarks of Thrift Books Global, LLC