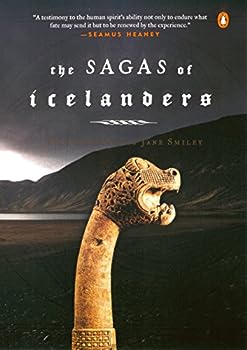 (Part of the Íslendingasögur/Sagas of Icelanders Series)

by Various and Jane Smiley

A unique body of medieval literature, the Sagas rank with the world's greatest literary treasures--as epic as Homer, as deep in tragedy as Sophocles, as engagingly human as Shakespeare. Set around the... This description may be from another edition of this product.

Published by Thriftbooks.com User , 17 years ago
I've been seriously consuming Medeival literature for about a year now after my interest was re-awakened (I found out the Mythology & Folklore shelf at Barnes & Noble is a veritable treasure trove!) I'd never read a saga before, but the Poetic Edda had convinced me that I would enjoy anything Norse or Icelandic. Sagas of Icelanders is a huge, bulky book. To get a book that size at such a reasonable price was a bargain I could not pass up. The introductory material helps put a historical perspective on the sagas and prepares you for what to expect ... then the fun starts with Egil's Saga, which is the longest and possibly best in this collection. Other reviewers have lamented the absence of Njal's Saga here - it is published seperately and was probably too long to include in this collection. (Based on what folks have said though, I'm going to have to get Njal's Saga.) I am now a saga addict! I devoured this book with amazing eagerness; each story is an engrossing page-turner. I just couldn't stop reading them. The style is intentionally simple with an economy of words and an emotional starkness that reminds me of Dashiell Hammett. There's no chivalric nonsense or courtly fanciness to be found here. The storytellers do not attempt to flatter their audience or paint their characters in a more positive light. Characters are tragically stubborn, stupid, violent, irrational, sometimes even psychotic. They can also be strong, noble, just, independent, faithful, practical, and hardy. The sagas have a "just the facts" attitude that is unique in Medeival literature. They are also unique in being epic-length prose instead of poetry, and having secular subject matter. I have to wonder - these monumental works, produced in the Christian era but portraying semi-historical pagan characters in a sympathetic light - how did they get written? Who wrote them and why? Who was the intended audience? This is the mystery of the sagas when the indroduction refers to them as a "literary Stonehenge." The world of the sagas is violent. There's plenty of killing - sometimes for no apparent reason, but usually it's an act of revenge for a wrong, real or perceived. One reviewer with an axe to grind has condemned this book as a "distorted view" of Icelandic history, but I think he misses the point of the collection. It's not meant to be an accurate history; it's a sampler of Medeival sagas. Consider how "accurate" a collection of two-fisted detective novels would be as history of early 20th-century America. Literature is supposed to entertain. Who wants to read about Grimwald the Meek who just stays on his farm and lives peacefully for 50 years? That's not interesting. The sagas are about interesting people who did remarkable things. But - again, strange for Medeival literature - most of the saga characters are NOT of noble blood. They are often members of wealthy and influential families, but seldom are they royalty. People in the sagas are no

Published by Thriftbooks.com User , 19 years ago
My historian Father sent me this after I made some sort of witless comment about Leif the Lucky, & when it arrived I was somewhat taken aback -it is HUGE, close to 800 pages if you include index & glossary-but once you dive in, it is hard to put it down. Here we get the stories of the Viukings of the Northwest Atlantic -the Icelanders of the title plus the doomed expeditions to Greenland and Vineland-told in all their wild glory. Of course one wishes one could read it in the original, of course one wishes to hear it sung, but this is the story of a real "other" history that all too often gets left out of the standard texts. This collection contains 10 sagas and several Tales by different translators. While having a number of different folks doing the translation makes for a somewhat uneven "voice" overall I found myself slipping from saga to saga with no trouble. The book includes a nice introduction, several useful maps, plus some simple diagrams of Norse ships and buildings. Anyone with an interest in sea-farers and the history of the north would be well advised to hit their "one-click" buttons right now, then, as soon as the box comes, throw an extra log or two on the fire, pour yourself a flagon of the closest you can get to mead & kiss the rest of the day goodbye -you are in for a treat!

Published by Thriftbooks.com User , 21 years ago
This is a big book, immense really, containing some 17 sagas and tales of the Icelanders. It is a selection from the even larger collection of Viking sagas called "The Complete Sagas of Icelanders." Readers interested in Medieval Literature will surely want to add this book to their collection. These are crisp, new translations that bring the stories of the Vikings to life. Fans of the literature of the Mediterranean region a thousand years ago, works such as "Poem of the Cid" or "Song of Roland" will notice great differences here. Unlike much of the epic poetry there, the Icelandic Sagas are written in prose. Even so, many of the tales include extensive poetry, for the Vikings admired warrior-poets.Many of these tales read like history and cover long sequences of time. They "feel" very real. For example, in "Egil's Saga" many generations pass before it is over. Egil himself doesn't make an appearance in the story until almost midway through. The sagas are often the stories of ordinary people rather than kings and knights. But be forewarned, there is much violence here. The modern reader may be bothered by the tendency toward quick violence and sudden death as characters punish with a sudden ax to the head those who have "wronged" them and are admired for such behavior. "The Sagas of Icelanders" includes extensive introductory essays and appendices to help the reader understand this fascinating period of time and these unique peoples.

Published by Thriftbooks.com User , 22 years ago
These sagas are selected from the excellent and rare five volume set "Complete Sagas of the Icelanders". The translations are clear and readable. A glossary is provided to explain terms unfamiliar to those new to the sagas. In addition there is considerable historical background material which gives the necessary context for understanding the sagas.If you enjoy the Old Icelandic sagas, this volume is a _must have_. If you aren't familiar with the Old Icelandic sagas, this is probably the best place to start.
Trustpilot
Copyright © 2022 Thriftbooks.com Terms of Use | Privacy Policy | Do Not Sell or Share My Personal Information | Accessibility Statement
ThriftBooks® and the ThriftBooks® logo are registered trademarks of Thrift Books Global, LLC